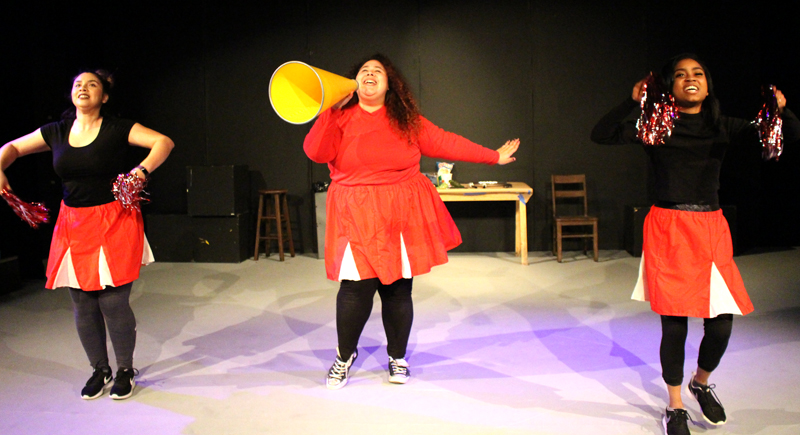 There’s a scene in “Shapeless” in which Peggy (Valerie Naranjo) is having her flaws pointed out to her by three rude folks, presumably representing channels of her own inner monologue.

She needs to lose 10 pounds, or perhaps 40, one says. She’ll never be desirable looking like that says another. Her hair looks terrible.

Peggy sits there, silent, taking it all on the chin. Soon — but not soon enough — the three exit, leaving Peggy by herself. Another enters and attempts to comfort her. “What are you doing?” Peggy snaps before storming off.

“Shapeless” is a play about confronting those voices — internal and external — that tell you you’re inadequate, or even unlovable.

Set as a group of actors rehearsing scenes for a play opening in a few days, the framing allows for more direct commentary on society’s anti-fat views and the inner struggle to overcome the anxieties they cause.

The play’s central drama comes from the conflict between Donna (Beatriz Hernandez) and Peggy, whose hair trigger temper often finds Donna’s body in its crosshairs. Add in a no-good boyfriend, Mike (a despicable Austin Trenholm), and you’ve got a cast with chemistry more suited for a weapons R&D lab than a stage play.

“Shapeless” features yet another well-rounded cast from the Los Medanos Drama Department.

Trenholm is both a talented comic relief — defusing the show’s numerous conflicts — and a dirtbag, all-too-willing to bail on 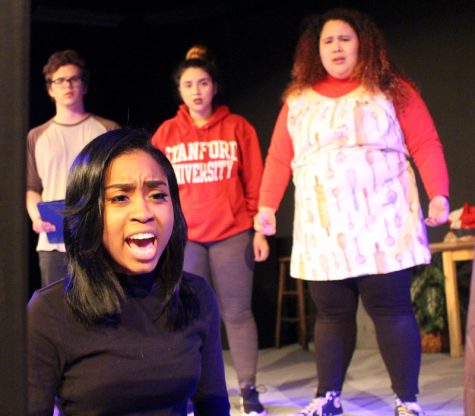 his girlfriend when another woman gives him a modicum of attention.

Hernandez (editorial disclosure: Hernandez is co-editor-in-chief at the Experience) brings a righteous fury to the constantly maligned Donna, and her monologue is the show’s dramatic high point.

Cierra Nelson and Naranjo are also good in their less developed roles — Peggy is a bit one-note as an antagonist, and I would have liked to see what made her tick rather than her causing conflict in every scene.

Prior to the show, director Du’Praiseja Smith spoke to the audience, underlining the importance of our being aware of eating disorders and their many forms.

It may make you uncomfortable, but it’s a satire, she said, and it’s okay to laugh. And though the writing was sometimes uneven, “Shapeless” is a well-performed play whose sharpest critiques do what great satires do — leave the audience stunned and uncomfortable.