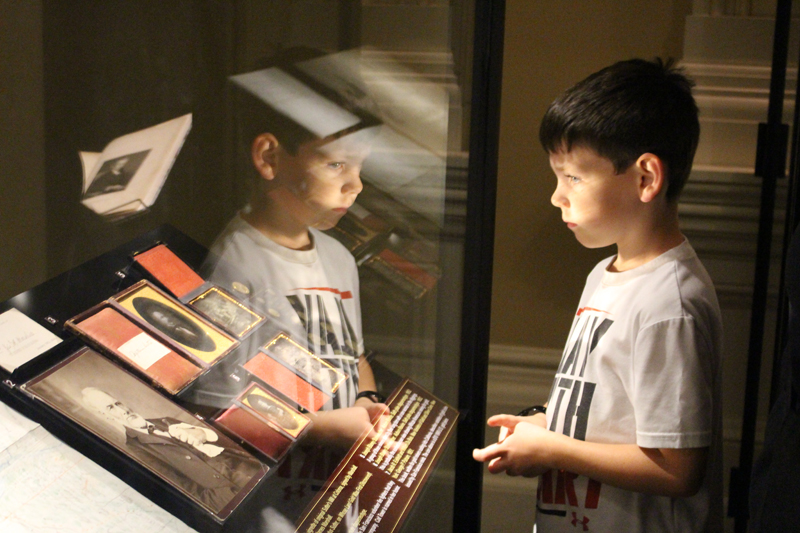 Co-Editor-in-Chief Beatriz Hernandez won first place in the on-the-spot Feature photo contest for this picture of California Sate Capitol visitor Jack Smith viewing the "Out of the Vault" exhibit in Sacramento.

The Los Medanos College Experience staff made their presence known at the annual Northern Regional Conference of the Journalism Association of Community Colleges earning 12 awards total including general excellence for their efforts on the school paper.

The three-day conference was held from March 30 to April 1 at the Double Tree in Sacramento.

Copy Chief  Tyler Mortimore is no stranger to the event, as he continued his successful run at the conference bringing back two awards — after managing to bring home three last year. Mortimore reeled in first place in opinion writing for his story “Protest too spicy for white people” which covered Colin Kaepernick’s national anthem protest, along with an honorable mention for his news story “Money missing from tax return.”

“It was cool, last year I won for the critical review which is on the spot, but this was a mail-in one, so it was something I really spent time on and put thought into and it was on a pretty important topic,” he said.

Adding on to the list of the multiple award winners, was Co-Editor-in-Chief Kimberly Stelly who won honorable mention for column writing for her stories “Shock value no longer edgy” and “Solidarity is key for real freedom.”

“I didn’t expect to win anything, so when they called my name, I was like ‘who’s that?’” Stelly said laughing. “But I was super proud of that, I thought it was a risk submitting mine because … I didn’t know if they flowed smoothly.”

A staple of the conference is on-the-spot competitions, in which students are tasked with completing a certain assignment in a limited amount of time, which is then submitted for appraisal. One can imagine the nerves that come with the exercise, but Co-Editor-in-Chief Beatriz Hernandez not only participated in the on-the-spot feature photo contest, she triumphed in first place.

“What they do with feature photo is they bus you off to this mystery location and they tell you to just go ahead and just take pictures, and that’s something I’ve never done before,” Hernandez reflected. “When I was actually doing the competition it was more so me being nervous because I wanted to know I could prove it to myself, but the best way to describe it is it felt natural, it felt like this is a comfortable place.”

Opinion writing proved to be an area of strength for the Experience staff, as Managing Editor Adria Watson snagged fourth place for her column “Black girls are not their tropes.” Her award meant two out of the top four pieces for opinion writing in all of the state were produced by writers from LMC.

However Watson aimed at far more than just winning in the competition when she sent in her story.

“I was really proud of that column,” said Watson. “The whole point I was trying to make in it was that someone could read the column and be like ‘you know what I completely agree, I can relate to that, I don’t see myself represented on TV and I’m so glad she put it into words.’”

While the writers certainly received their fair share of recognition, Cartoonist Joey Fajardo brought in second place for his editorial cartoon “Transgender bathrooms.”

“Honestly it’s just humbling. It’s humbling to know that there are other people outside of LMC who enjoy my work and say on current events,” Fajardo said.

Three honorable mentions were given out to round out the 11 awards: Cassandra Dickman news story for “Board trustee Negedly dies,” photographer Cathie Lawrence in the photo essay contest “Teapots,” and inside page layout Oscars page by former Experience editors Joey Delano and Brendan Cross.

The event is not mandatory for staff members, but is recommended for the experience, which was summed up by Hernandez.

“I think it’s an important thing in all regards doing the workshops you learn a lot of info you don’t learn in the classes we offer here, competitions definitely provide a good experience working with deadline, doing a lot of things that are closer to what journalism is like in the real world and overall it’s a really good chance to network and bond with your own staff.”