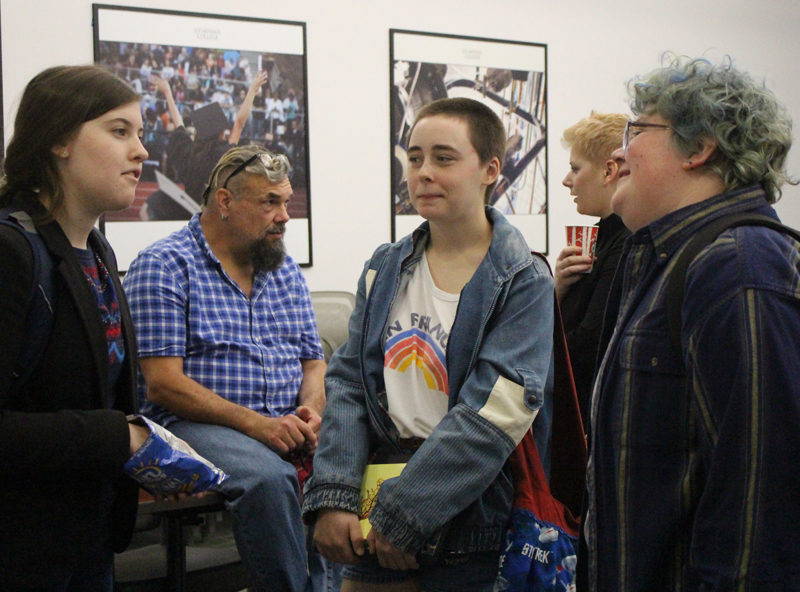 The mixer was a social event planned by a handful of faculty and staff members in hopes of providing a fun and safe environment for members and allies of the LGBT community. The event started at noon and was held in room L-109, providing attendees with food, beverages and company.

“It’s really just a mixer of faculty, staff and students- but what we really want to come out of this is some sort of community between LGBT peoples and their allies,” said History Professor Joshua Bearden who had a hand in planning the Mixer.

“We want students to know that this is a safe space for them.”

Along with Bearden, Counselor Melissa Pon and English professors Liz Green, Danielle Shaw, and Jeff Matthews also had a hand in the planning of the ‘Big Gay Mixer.’

“There was a professional development workshop in January that I facilitated and out of that we kind of came away with different ideas about what we wanted to do to build LGBT community and awareness on campus,” said Green. “So Melissa Pon in counseling had the idea. She used to throw a lot of student events in Berkeley and she had the idea to have this mixer, so we’ve kind of been building since then.”

Shaw added that there was a good turn out and that having the mixer was good for community building.

“I’m glad there’s both faculty and staff and students here, so it’s nice to see that we’re building community… and I think we’ve achieved that to some degree,” said Shaw.

In addition to organizing the mixer, the professors expressed that they wanted to create an ‘Out-list’ as well as an ‘Allies-list’ on the LMC website which would include the names of staff and faculty that either identify as LGBT or as allies to the community.

Matthews explained “It’s about building a community here for the LGBT community- for students to come see faculty and staff, to know that we’re here, to know who we are and learn our faces.”

He added, “A lot of younger queer students aren’t comfortable talking to other adults or people older than them or have any role models. Maybe they haven’t known any gay people up to this point in their life- and so we think it’s a really good and positive thing for them to know that there are happy, well adjusted and educated gay people they can talk to.”