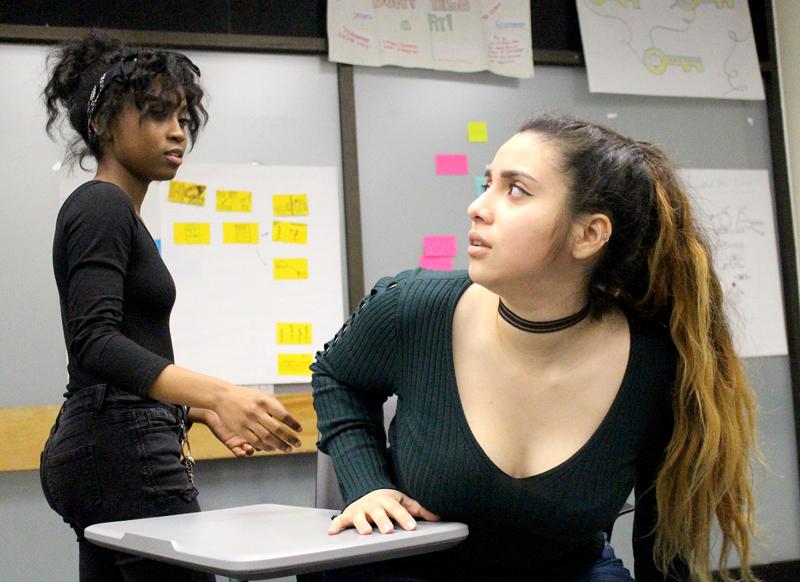 “Shapeless,” a dark satirical play with a social justice bent, is coming to Los Medanos College in April.

The play focuses on body image issues and societal pressures that woman of all shapes and sizes face.

The play, written by Sean Carthew, and directed by LMC’s own Du’Praiseja Smith, is a one-act play with a small cast about three women — Carol, Donna and Peggy — and their friend Mike. Together, they’ve written a play stylized as a series of sketches.

Smith, a first time director is excited to put on such a socially relevant play.

“Body image isn’t really talked about ever,” said Smith “It shows how people of different body types are looked at by society.

Smith’s excitement about he film’s social justice leanings is shared by Stage Manager Junie Durling, who says that the play deals with “something we don’t usually talk about.”

“I hope people think about the way they criticize others,” said Durling going on to say that she hopes the play makes people “more aware of things they say about people.”

Austin Trenholm who plays Mike, is returning for his third play at LMC.

Trenholm says Mike is a bit of a jerk and that this is the first time he has had to play a character that is “essentially the bad guy.”

“She’s probably the nicest, which isn’t saying much because they’re all kind of jerks,” said Hernandez.

Hernandez’s previous experience with the theatre was in the previous play Brother Gary, “I had only done a monologue,” said Hernandez going on to say that her expanded role is “overall a good experience.”

One of the characters “level-headed” Donna is the “sensual and seductive” Eve in the play within a play, which Hernandez admitted is far outside of her comfort zone.

Hernandez also mentions that the play is progressive in its depictions of the struggles with body image faced by not only by the larger women but also for more average sized women, skinny women as well as men in general.

Cierra Nelson plays Carol, another character who also struggles to accept herself.

According to Nelson, Carol “doesn’t eat anything — food makes her feel gross.”

Nelson had some trouble relating to her character, as the two are wildly different people.

“Sometimes I don’t understand where she is coming from,” said Nelson whose personality clashes with the waifish Carol.

Part of what drew Nelson to the play was its message of body positivity.

“If there are people like Carol in the audience, I hope she sees that she is beautiful and it doesn’t matter what shape you are,” said Nelson, “Its better to just embrace the size that you are.”

Due to scheduling issues, the play is tentatively scheduled for April 11, 12 and 13.