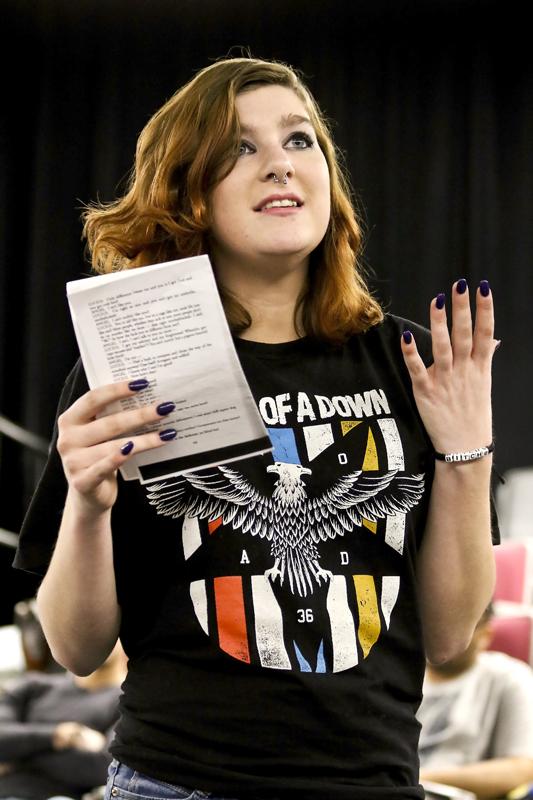 Drama students and faculty are busily prepping for their upcoming plays this spring. With a healthy mix of different genre, directors and even show length, this season provides something for everyone.

The lineup includes “Jesus Hopped the ‘A’ Train,” in late March, “Shapeless,” in April, “Death and Silence,” in early May and “New Play Festival,” in mid May.

“Jesus Hopped the ‘A’ Train,” is written by Stephen Adly Guirgis. The play takes place in a prison on Rikers Island in New York and centers on prisoners Angel Cruz and Lucius Jenkins who face murder charges.

Department Chair Nick Garcia said the play is a must see.

“It’s an absolutely incredible show,” he said. “When I first read it, it’s like a combo of ‘Oz’ meets ‘Shawshank Redemption’ so it’s got heart, it’s got power, it’s funny, the characters are incredible and so you feel like you’ve experienced something special when you watch it.”

“Death and Silence,” an original play written by Ariel Dunn and directed by Nick Garcia, takes place in a post-apocalyptic world filled with zombies like the “The Walking Dead” but told in it’s own unique way.

“It’s a really good script,” says Garcia. “It is written by an emerging artist from our school that has a lot of talent and I just feel really honored to be a part of the project.”

“Shapeless,” directed by Du’Praiseja Smith and written by Sean Carthew, is a one-act satire about body image and eating disorders.

Four actors attempt to put on a comedy play that deals with body size and shape. The story focuses on three women, each with different figures, who are mocked by Mike, a playwright.

Smith said she wanted to direct, “because I haven’t seen any plays about body image and this play expands upon the idea.”

The annual “New Play Festival,” is a collaboration between drama and English. The Creative Writing class write original plays, Garcia picks the best ten and the Acting II class acts them out.

Aside from plays, the Drama department sponsors “Shenanigans” an improv/theatre club. Club members improvise for five minutes on stage and perform their own scenarios.

Club President Yasmine Rahimi, who was a part of the LMC production “Boeing Boeing” in December said, “I’m kind of learning with everybody else on how all we want this club to be and I really love the people who are in it. They’ve all kind of became family to me.”

She explained the importance of having a theatre club because a lot people can’t take the classes and those people still want to be apart of theatre. “It’s kind of a safe place for a lot of us and I wanted to create that for other people as well.”

“Shenanigans is a great way to get started into theatre because it’s not forced like you are to a class and you don’t have to pay for it. You don’t feel the pressure as much to participate,” she said. “You can sit back and watch and see if it’s something you want to do.”

If you’re interested in joining, stop by the Little Theater on the third floor of the College Complex. The first meeting will be scheduled soon.