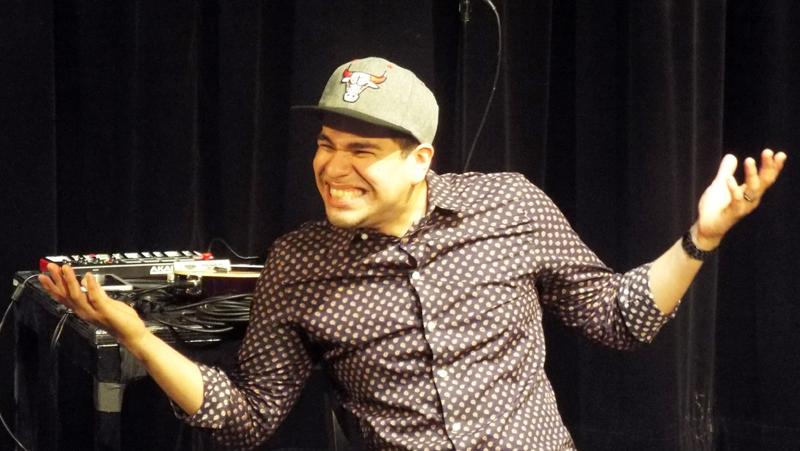 Using a mix of spoken words and the musical influences of Latin and hip-hop paired with humor, Brian Quijada’s “Where Did We Sit on the Bus?” captivated the Los Medanos College Little Theater whilst touching on deeper issues regarding race, immigration and identity.
The one-man show follows the life of Quijada up until his proposal to his wife.
It is based on a question he asked while learning about Rosa Park’s involvement in the civil rights movement. While he knew where the black and white people sat on the bus, he noticed there was no mention of his people, so he asked, “where did we sit on the bus?”
As nonblack people of color often get excluded from the narrative, his teacher was clearly taken aback when he asked his question and brushed it off with a “Oh, they weren’t around.”
This story makes an important point and explores a side of Latinx people others often neglect.
One of the most captivating parts of this show is how easy it is to relate to Quijada’s journey because it’s told so genuinely, nothing about it feels phony.
He allows himself to be vulnerable and tell his story and parents’ journey of coming to this country.
Being performed in a space like the Little Theater made the storytelling feel more personal and intimate.
One-man shows are not easy in the slightest. Artists always run the risk of a bad crowd or jokes not landing, and it can be especially stressful without an acting partner. However, b he was able to thoroughly entertain his audience without missing a beat.
One of the most unique aspects of his show was his use of Bluetooth technology and live-looping. The app he used allowed him to move around the stage and control his soundboard at the same time.
He effortlessly mixed humor in with the more serious topics by using music to set the mood based on which sounds he emphasized.
In the end, he promised that from that point on he would explain to others and to his future kids where they sat on the bus and where they fit in history.