Play is ready for laughs

'Brother Gary' to open next week 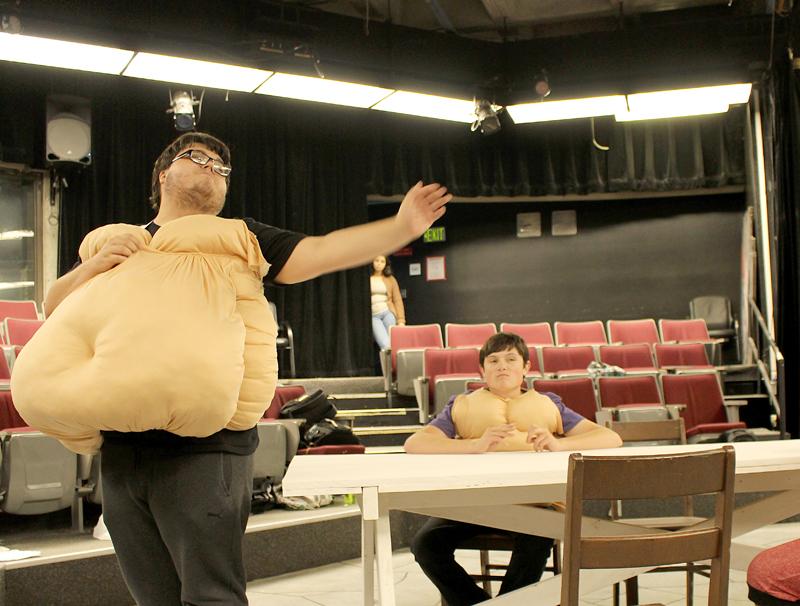 During rehearsal of what the cast of “Brother Gary” calls “the dinner scene,” even director Jack Nicolaus could not suppress giggles and sporadic laughter while five minutes of a silent scene was acted out in front of him.
Consisting of seven actors and 12 characters, the story of “Brother Gary” is about a monk in a Franciscan Monastery who feels aggrieved for being passed over for a promotion because the Church decided to hire someone for the sake of having a diverse staff. Nicolaus states it as, “He is forced to reckon with an institution that is making decisions that he believes compromise the integrity of the church.
The main characters are “Brother Paulo” (played by Robert Dunn), “Brother Gary” (Michael Simpson), “Brother Mauro” (Nick Gosselin) and “Brother Angelo” (Nick Murphy). A few actors in the play have multiple roles as Italian monks with counterparts as American monks.
Although the plot sounds serious and controversial, the play is actually a comedy. Every cast member says it is funny and Nicolaus talks it up as a beautifully satirical work that takes place in a religious setting with a theme of diversity throughout.
“I would say that it is an absurd lens on what it means to try to make a place diverse without actually examining what it means to be tolerant and welcoming of every different voice. So while often in the world we talk about diversity for the sake of diversity, as a goal unto itself, this play is taking a bit of a more absurdist, satirical view of what it means when you don’t actually look at the root causes of different types of people working together and the conflicts that emerge from that.”
He likes to analyze the play in terms of what it means to work at Los Medanos College, “I am really interested in the way, especially here at LMC, in which institutions, kind of like in the larger sense, make these decisions about policy for what you might call branding reasons or public relations reasons.
This is the first play Nicolaus will direct at LMC. He chose to direct “Brother Gary” when he connected with an agent who gave him a script written by a Bay Area native playwright who now lives in Los Angeles, Ramiz Monsef. Nicolaus said, “I was laughing in my room reading it and I knew I wanted to go forward with it.”
The first night of the show on Thursday, Oct. 13, Ramiz Monsef will be visiting from Los Angeles to see his play being performed for the first time ever. The show has never before been produced and Nicolaus is confident the students at LMC will do it justice.
“This is a world premiere. When we approached him (Monsef) about doing it, he was really excited because a lot of playwrights write plays that never get produced in a way that doesn’t make them feel like their career is on the line. We are the first group to ever bring this to life,” said the director, “I think this cast is really, really, really, really, really good. I think they’re really funny. There are people in this who have never performed in an LMC production before who, in my humble opinion, are having their coming out parties in terms of performances.”
The cast easily matches their director’s enthusiasm.  Du’Praiseja Smith, who plays “Old Yola from down the hill” said, “The show is really funny and I think currently with everything going on in the world, people could use a good laugh.”
Simpson, “Brother Gary,” has a personality that perfectly matches the sarcastic feel of the show, “Let’s be real, Brother Gary is the star of the play, that’s the name of the play; I have three roles and I am the star.”
The director is proud of his cast and their ability to perform an original piece. He says he wants people to recognize the talent that LMC can provide with limited resources of the drama department. In the car on the way home from the show, he wants people to be thinking, “I didn’t waste my night. I would love for people to be thinking about the word diversity and the way we toss it around and how we can work to truly understand each other in a way that goes beyond just filling diversity quotas.”
Overall, the play is one Nicolaus is looking forward to presenting to audiences, “The first thing I look for when I direct a show is am I having fun, because if I’m having fun then hopefully other people are having fun.”
“Brother Gary” will be showing in the Little Theatre Oct.13-15, 17, 20-22 and 24 at 7 p.m.. Tickets are $7 with student or military ID and $10 general admission.