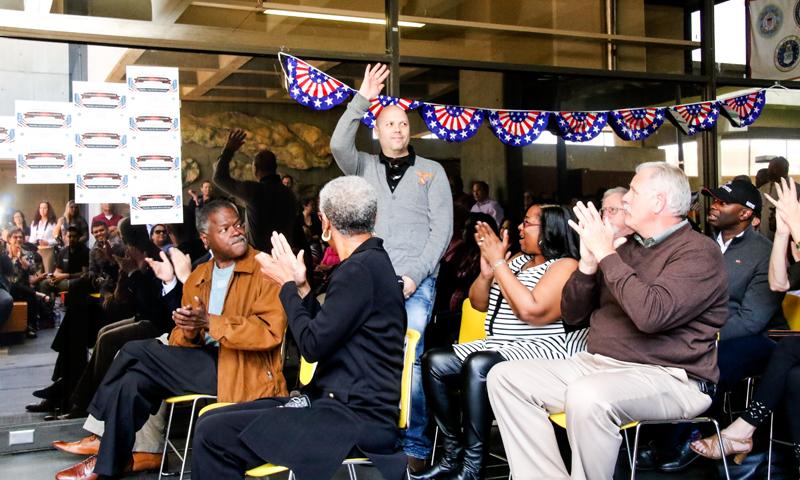 Student Trustee Gary Walker-Roberts (standing) at the opening of LMC’s Veterans Resource Center, one of the projects he worked to spearhead during his time as Student Trustee and LMC Student Body president.

Members of the Contra Costa Community College District Governing Board said goodbye to Student Trustee Gary Walker-Roberts last month as he wrapped up his term representing students from across the district. They presented him with a certificate at the April 27 meeting for his year of service. Governing Board President Vicki Gordon praised Walker-Roberts as a “hardworking, caring and involved student trustee.”

“Gary’s upbeat personality lit up every room he walked into and his inclusive leadership style made him extremely effective in bringing diverse groups together,” she said. “I have valued his input and he has contributed to robust board conversations by his inquiry and good observations.”

The governing board makes policies that impacts students’ education across the district, so the position of Student Trustee is critical to integrating the student prospective.

Walker-Roberts also chaired the Student Trustee Advisory Council where the student government presidents from each of the three colleges brought their respective student body voices to topics on the monthly agenda. He, in turn, reported to the governing board the council’s perspectives on items that were on the board’s agenda.

“It may seem boring, but for me it was amazing,” said Walker-Roberts. “I learned so much about civic leadership and how policies that affect students are created and implemented at the district level.”

Walker-Roberts, who served as president of the Los Medanos College Associated Student Body last year, began his studies at LMC in the fall of 2011. He received two associates of arts degrees, one in behavioral science and social science in 2013, and another in arts and humanities in 2015. While he was a student at LMC, he was concurrently enrolled at California State University East Bay where he also earned a bachelor’s degree in 2015 in Ethnic Studies: Genders and Sexualities in Communities of Color.

Concurrent enrollment must agree with Walker-Roberts. He is working on another associates degree at LMC, this one in Spanish, while also pursuing a master’s in English online at Arizona State University. He hopes one day to teach English in Lesbian, Gay, Bisexual and Transgender studies in the district.

“One thing that is being overlooked by the district and by LMC is reaching out to our LGBT youth and partnering with the gay/straight alliances at the high schools to give a pathway to taking classes in LGBT studies,” said Walker-Roberts. “It is important to reach out to new minority groups to bring them into the conversation and into academia at the community college level.”

“I learned my history about the people that came before me and the struggle to get to where the LGBT community is today,” he said, adding that he is excited by the headway the college is making in the area of LGBT studies, with a new degree likely by the fall of 2017.

Walker-Roberts pointed with pride to several accomplishments during his tenure as a student leader at LMC and in the district.

As student government president, he worked with college President Bob Kratochvil to establish gender-neutral restrooms in the science building. During the Elevating Diversity Conference Walker-Roberts spearheaded in 2014, members of the transgender community voiced concern that transgender individuals often had to wait for unreasonable periods of time for the privacy they needed to feel comfortable. He and Kratchovil determined that instituting gender-neutral restrooms was an inclusive action necessary to appropriately address this issue.

As student trustee he promoted increasing the student voice at the district level by having three student trustees on the district board instead of just a single trustee that rotates every three years among the three colleges. He also advocated for an additional student to serve as an alternate on the selection committee to replace Chancellor Helen Benjamin, who will be retiring in December.

Gordon said Walker-Roberts demonstrated his leadership as a student trustee by “working with Sentinels of Freedom to help support our military veterans and bring veterans centers to our colleges.”

Walker-Roberts, whose husband Jason is a retired Marine, first got involved in the veterans center initiative as student government president at LMC. Veterans returning to college after service approached him with their concerns about the lack of places to study on campus. This resulted in the formation of a Veterans Task Force with the help of veterans Diane Ferguson, an employee, and Stuart Wadsworth, a student.

Kratochvil, who Walker-Roberts has worked closely with as a student leader, said he is impressed with his enthusiasm and engagement, and added, “he certainly has his student interests foremost in mind.”

Contra Costa College President Mojdeh Mehdizadeh said she appreciated his willingness to visit all three district colleges and engage in conversation with students. He “understands there are differences among the three colleges. Gary has a real knack for being able to share varying points of view in a very effective way.”

Although his top priority is to complete his master’s degree in English, his experiences as a student leader have shown him he can make a difference.

“Politics is at the forefront of my mind and I want to help give back to the community in which I live,” he said.

Those who have worked with him value his contributions and believe his ability to connect with people will eventually lead to a career in politics.

“I am sorry to see him move on, but I am sure we will see him around,” Gordon said. “It would not surprise me to see him continue in the political arena.”

When thinking of the day that he leaves LMC behind to begin a life of teaching and advocacy, Walker-Roberts said he would take with him “many great memories including knowing that LMC is where my passion for advocating for underrepresented student populations started.”