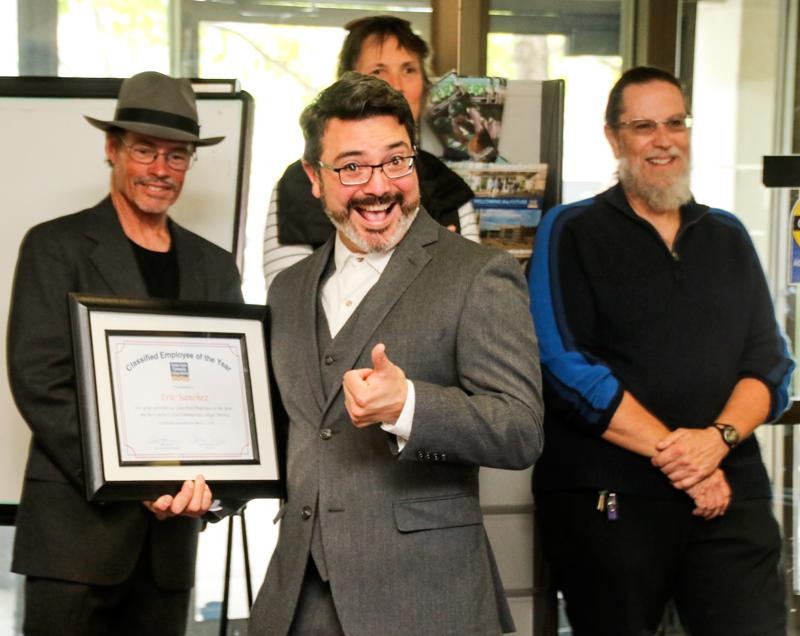 Vicki Gordon kicked off the event explaining how “truly grateful” she is to have gotten to know so many dedicated employees.

“Our greatest asset is our employees,” said Gordon. “We hope you’ve found your employment to be enjoyable, productive and worthwhile.”

LMC President Bob Kratochvil introduced Sanchez, who was presented with a certificate. Kratochvil read to the crowd a blurb written about Sanchez by those who nominated him including Photojournalism Instructor Curtis Corlew and Instructional Assistant Jamie Young. Sanchez’s colleagues said he did his job “smoothly and effectively, with grace” and that he is “an amazing asset from the perspective of both the faculty and the students.”

Colleagues also wrote about just how much he means to the student body. They know him and are comfortable enough to ask him questions or ask him for help.

“Eric has become an indispensable member of the community,” read Kratochvil. “We are very glad he’s won this honor.”

Those who have worked with both Lynn and Morgan also had something written up for the occasion, which Kratochvil also read.

“Morgan is one of LMC’s most committed educators — she’s deeply committed to student success and equity,” said Kratochvil. “She does this in collaboration with her colleagues with good grace. She’s also really, really funny. She is very, very kind and she has great shoes.”

“He is funny, compassionate and warm,” Kratochvil read of Herman, whose peers listed the many things he’s done for students and faculty, such as letting students borrow desk copies of textbooks when they can’t afford them and guiding them when preparing to transfer.

“If you need 25 copies of the same handout, Mel will jog down two flights of stairs at 7:30 a.m.” Kratochvil paused.

“It says here, ‘Well maybe not jog,’” a comment which garnered boisterous laughter from the audience.

“It is clear we are learning from the very best,” finished Kratochvil.

DVC President Peter Garcia and new CCC President Mojdeh Mehdizadeh presented awards to every newly tenured employee at their campuses. Eight employees from DVC and two employees from CCC were given certificates as well as kind words.

CCCCD Chancellor, Dr. Helen Benjamin then addressed all those who were honored whom she referred to as “an impressive group.” She acknowledged the importance of all the classified employees, saying “they are on the frontlines” when it comes to interacting with the student body. To Sanchez, she said he represents all classified employees and thanked him for his hard work.

She then turned her attention to the audience.

“Thank you for your commitment to our students, we are very grateful for what you do,” she said, also thanking the friends and family of the honorees for all their support.

Kratochvil had nothing but nice things to say about the honorees from LMC. “Morgan and Mel are wonderful people,” he said. He also noted he was “very proud” of Sanchez, as were the people who nominated him.

“I feel so lucky to be Eric’s assistant,” said Young about Sanchez.

Benjamin then ended the ceremony, encouraging everyone to mingle and enjoy the refreshments. Those who were awarded were gathered so that group pictures could be taken.