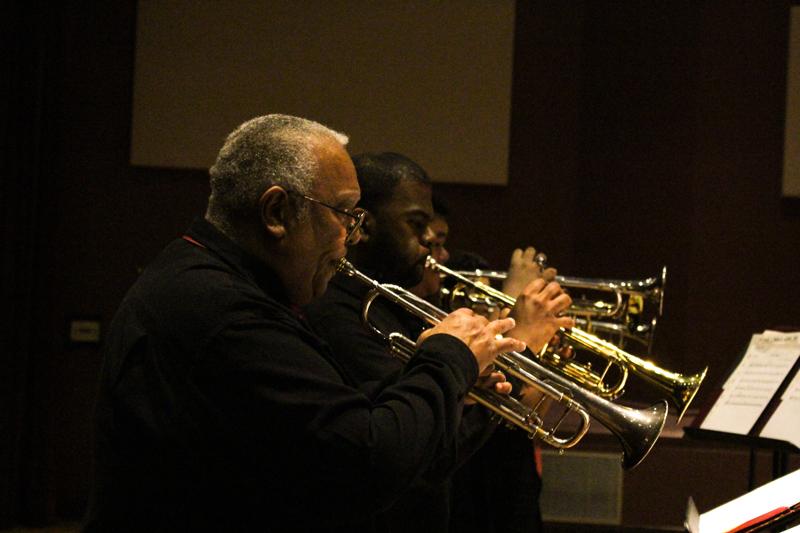 The Los Medanos College Recital Hall nearly reached capacity Saturday night, Feb. 27 for a Jazz Concert performance featuring, the LMC and Heritage High School Jazz Ensembles as well as the Electric Squeezebox Orchestra, a “17 piece big band that plays music composed and arranged by its members” led by trumpeter Erik Jekabson, from San Francisco.
Although I am not an avid listener of the Jazz genre, all three groups were able to find a way to appeal to the general public. The music played was not what most would see as conventional for the music style.
As the first music event I’ve attended in my time at LMC, I had no idea what to expect from each of their performances. I was impressed by the talents of the Heritage High School Jazz Ensemble due to their skill and knowledge as young student musicians.
The LMC Jazz Ensemble performed two pieces accompanied by vocalists Kadesta Prothro-Harris and Breana Ford. Their voices complimented the soulful tunes, however, at times the instrumentalists overpowered the singers.
“Eden’s Island” in particular stood out as a unique choice taking its audience on what sounded like an epic journey through space. The guitar solo by Frankie Trono gave the song a Latin-sounding flair unlike all the others.
Each of the groups performed at least one song that was able to make a beautiful transition from upbeat to slow and mellow.
“Cheap Rent” by the Electric Squeezebox Orchestra, which can be described as having a San Franciscan vibe, was particularly able to make a transition from a piano intro to a bubbly song you could dance to.
Future performances for the music department include a free performance of the “Industry of Gospel & Popular Music Seminar” Tuesday, March 15 from 7 p.m. to 10 p.m. There will also be a Student Recital Thursday, March 17 from 1 p.m. to 2 p.m. and a Concert Band Performance Wednesday, April 6 from 7:30 p.m. to 9:30 p.m.
For additional information contact professor Silvester Henderson at 473-7805 or music coordinator Fernando Lozano at 473-7805 or [email protected]