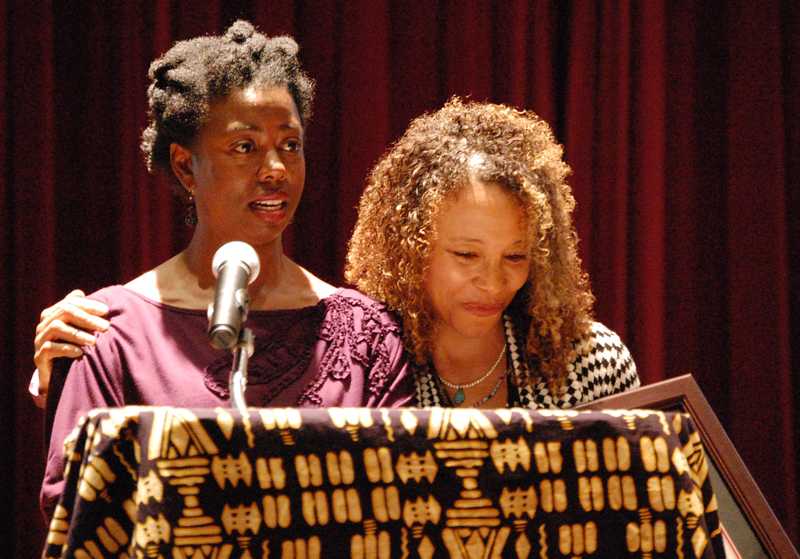 “It is a real eye-opening event everyone should take part in,” said LMC student Lymond Glover-Walker, a volunteer who helped set up the event.

Prior to the celebration, attendees and volunteers mingled in the corridor outside the Recital Hall. Tables displaying pictures of well-known African American activists and icons lined the walls outside the recital hall doors. Laughter echoed up and down the music department corridors as more and more people arrived.

“It’s beautiful thing to be able to reflect on the history of our people — you don’t see a lot of gatherings like this. It’s important we attract the main focus of African-American students as well as students of other ethnicities,” said Devon Allen, an LMC student who attended the event.

Attendees began filing into the Recital Hall where Dr. James Noel opened the celebration by introducing the LMC President Bob Kratochvil, who spoke briefly. Kratochvil was followed by the Black National Anthem, led by Felicia Thomas.

The celebration also included a performance from the Mbanza Kondo—a trio of young men who performed a Congolese percussion segment featuring rhythms and songs from Central Africa.

Student poetry readings from Gabrielle Brown and Brittany Hale followed, who read the poems “Self-Love” and “Blind,” respectively. Both poems expressed overcoming hardships one faces in regard to racial adversity.

Brandon Hughes, writer and author of “The Man Behind the Curtain,” came from Oakland to speak. He spoke to the audience about African-American icons and led a game of trivia about black history.

Community awards were handed out toward the end of the event. LMC student Teniesha Little received the Student Citizenship Award for her academic accomplishments and her inspirational spirit and leadership abilities.

The Community Inspiration Award was given to the Parental African American Achievement Collaborative Team for their dedication and involvement with the community.

The celebration wrapped up with a Lemn Sissay poem read by Noel and a song from gospel singer Tamara Edwards. The audience exited the Recital Hall and was greeted with an assortment of food—chicken, rice, corn bread, pasta and more.

“A lot of work went in to it,” said Dean of Math and Sciences Dr. A’kilah Moore, who had been one of the many faculty members who helped put the Black History celebration together. “It was an excellent show and I thought it turned out great. The poems from the students were excellent and hopefully next year it will grow more.”

“I think it’s wonderful they acknowledge students, faculty and committee members and give out awards,” said Little.

President Kratochvil was pleased with the evening’s proceedings.

“What a tremendous event—the students’ contribution, the poems and singers were wonderful,” he said. “Presenting the Thurgood Marshall Award to the Chancellor was a good tribute to her. I know Marshall was one of her heroes.”