Kindling interest in the past 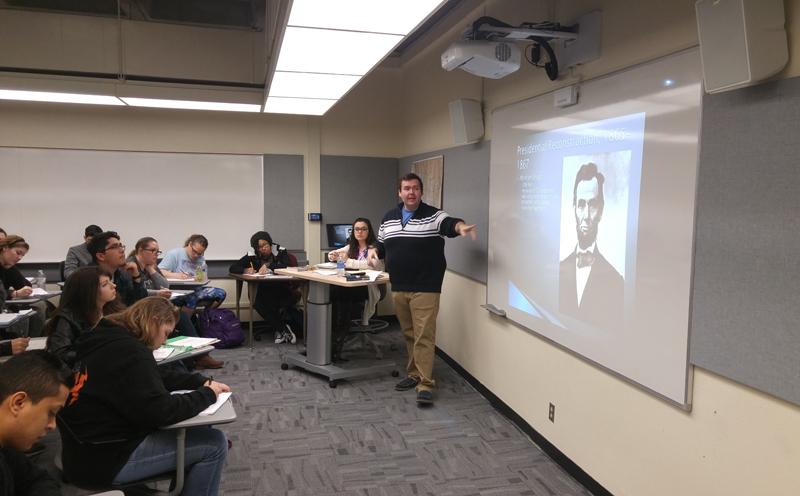 “In my early days, I was really interested in English history,” said Los Medanos College history professor Joshua Bearden, “It was always what I remembered reading about most.”

Book-stuffed shelves hang on either side of the walls in his small office. A desk hogs one side of the room, dimly lit by the glare of his computer screen and lamp. A book, partially covered, save for the prominent white print words of the title The Black Death sits on the corner of his office desk.

“When I got a Yorkie, I wanted to name it an English name—Thatcher” he said, associating the name with the former British Prime minister, Margaret Thatcher. “I just really liked the name.”

As a child, Bearden had always been drawn to history. While most kids would grumble and complain about reading a history book, Bearden enjoyed it. He would frequently borrow his sixth grade brother’s American history book, despite being in fourth grade himself.

“My brother used to get mad,” said Bearden, “because I would read ahead … using his [school] history book when he needed to do homework.”

When thinking back to what might have piqued his interest in pursuing a career in teaching, Bearden said it started with a project in high school.

“I had a lot of fun outlining the lesson plan,” said Bearden, recalling the project.

He had presented his project with great enthusiasm and received multiple compliments from his peers who also suggested Bearden think about a career in teaching. And so he did.

Bearden recalled his first teaching experience at the University of Alabama at Birmingham, looking both amused and slightly abashed as he told the story. It was his first lecture of the day and Bearden momentarily let his nerves get to him.

When he got the job, the university gave him his classroom number, his schedule and promptly left him to his own devices. With the lesson plan for his class prepared and ready to go, he stepped into a classroom as a teacher before students for the first time.

The class began and the room was quiet save for the scratching of pens and pencils on paper and Bearden’s own voice resonating off the walls.

He remembered being self-conscious of his voice during the lecture — how loud it sounded in the near-silent room. Noticing this, he became anxious and began increasing the pace of his lecture.

Then, he abruptly stopped talking mid-lecture to collect himself. For five minutes, there was nothing but complete silence as he calmed himself with slow even breaths under the dozens of pairs of eyes of his students.

“That’s what made it so bad,” continued Bearden, “they kept staring at me without saying anything.”

After regaining his composure, the lecture continued on without any other major flubs. Yet, a bit of nervousness lives on.

“I’ve been teaching for 10 years and I still get butterflies in my stomach,” admitted Bearden, a smile curling his lips.

Despite the near slip at the beginning of his teaching career, Bearden seems to have adjusted well to his position here at LMC.

“We have wonderful, exuberant class discussions about the readings and the handouts he gives us as well as his informative lectures.” said History 39 student Candace Brown, “He educates the whole person, equipping his students with concepts through the information in history so that we can become informed persons formulating our own history.”

Bearden grew up in the small town of Heflin, Alabama with his mother, father and brother. His grandfather was a conservative man and the pastor of a church Bearden attended in his youth.

“Religion has a big hand in the views in the south,” said Bearden, “Women were not allowed to speak in the church I went to.”

Conservative views are commonly found in Southern states and Bearden grew up with people who held such views.

“To be brutally honest,” continued Bearden, “1980 interracial relations were taboo and gay people were a little unheard of. Abortion — most people I grew up with were pro-life.”

When he entered college, he was exposed to different ideas and the classes he took in his major opened his eyes to the historical reality of the south.

“Studying the history of race and gender—it made me question ‘why can’t women speak in church?’”

Bearden realized sometime in his studies that history is strongly related to identity.

“What does it mean to be southern or African-American?” said Bearden, “the history that built behind that, tells us what it means. Studying race and gender the way I did — it made you see the way you live now was not how it was before … It’s all kind of made up as society progresses.”

In addition to having already achieved a Masters degree in history, Bearden is on his way to completing his Ph.D in History in Maryland, with a dissertation mainly focusing on interracial relationships — rooted from his fascination with history’s ties to identity.

While that is underway, Bearden continues to pursue his love for history and teaching here at Los Medanos, which he states has been, so far, a “wonderful experience.”