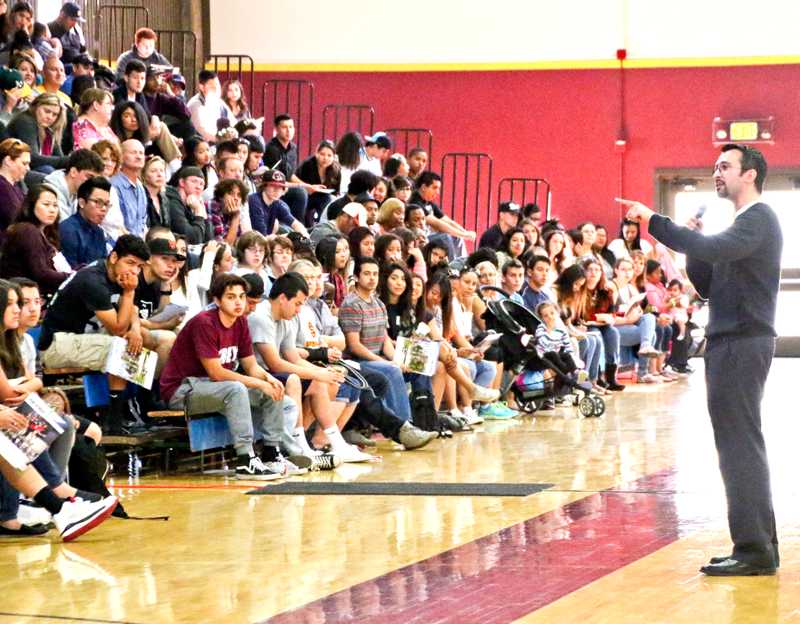 “Not only was it focused on the students but the parents received their own introductions and workshops,” said LMC MESA Director Nicole Trager.

The event kicked off with a short speech by LMC’s President, Bob Kratochvil, who said he understood the high school seniors could have been anywhere else and expressed his gratitude for those who not only helped coordinate the event but attend it as well. Kratochvil then introduced Drama Department Chair Nick Garcia, who started his speech off by giving the seniors a pep talk.

Garcia noted many people think going to a community college somehow makes you inferior but he told the audience “you are not less than.”

Garcia cited some of the accomplishments of the school’s many programs and stressed “if there is any single thing that you want to do, we have a program for that and if we don’t, we will find a way to get you to that program…we are here to serve you.”

He advised the high school seniors to make as many friends and connections as possible while they’re here and he ended his speech on a motivational note.

“If you’re at LMC, you are going to find staff and students who are just like you, who believe in you. We are dedicating our lives to you because you are a future we want,” said Garcia. “We want you guys to be better and more successful than we ever were.”

“He was very passionate,” said Crum.

About the event, Crum said, “it’s a wonderful outreach opportunity. It was fun.”

She said even though she was only able to bring three students, it was worth it because “it could change lives” and point students in the right direction.

Crum’s favorite part of the event was the student roundtable.

“I really think they connected when they asked the parents to leave the rooms,” said Crum and then praised LMC student Brian McGhee for his part in the roundtable discussion.

After Garcia’s speech there was time allotted for questions and concerns and then, after closing remarks, students made their way outside to gather in groups for the campus tour. Student volunteers and faculty from LMC led groups around campus and some stopped to take pictures with the seniors.

After they were shown around, the seniors, as well as the parents, got to attend the Career Technical Ed, Summer Bridge and Transfer Academy workshops among others — all of which took place in the math building.

After the workshop sessions were over lunch was served.

“The day culminated in lunch and a resource fair in the outdoor quad, which was even attended by the LMC mascot,” said Trager.

The Student Services Building was made available to assist the high school students and their parents with any questions, comments or concerns they had left over.

Pittsburg High School senior Tyler Flewellen found the workshops and the speakers to be helpful.

“My favorite part of the day was the tour. I fell in love with the way the campus is, especially the diversity,” she said. “Everyone, including the professors, I met during our workshops were very helpful. They made my experience very fun.”

Trager said she is “excited to start college in the fall.”

There will be another Senior Saturday, April 25. For more information, visit the college website at www.losmedanos.edu.