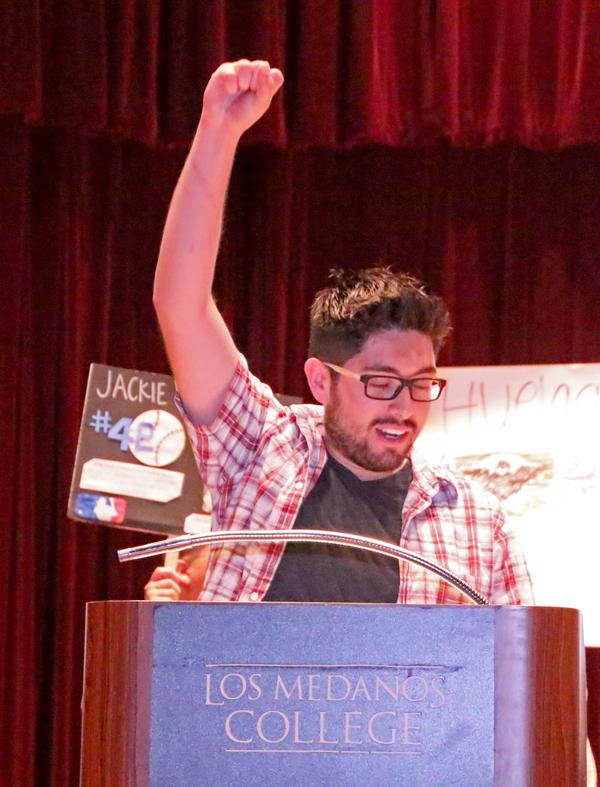 Alex Vega, a Puente student, participates in the Power of Change.

After the dinner, people were led to the music hall for the award ceremony. The first three rows were filled shoulder to shoulder as others dispersed to the back seats, widely spread out. Attendance was minimal in comparison to the 2014 award ceremony.

Each award recipient elaborated on the experiences that motivated and inspired them to pursue a “service to the community mindset” that resulted in their recognition. The presentation was led by the LMC Puente students.

The Chavez Spirit Award was given to Gabriela Banos-Galvan, who said “On behalf of everyone who has assisted in the amazing work we have conducted in this community, thank you all. To even be mentioned in the same sentence as Cesar Chavez is a huge honor. It’s a blessing and a calling.”

The Chávez Spirit Award is given to an emerging leader who embodies the spirit of César Chávez and has made a significant impact on the local community in the areas of advocacy and social justice.

Nick Garcia, Drama Department Chair, was recognized as a nominee for the East County Educator Award.

“I was not expecting to speak. I want to thank you all for this nomination. To be in the company of everybody who works so hard and so diligently for their community, is truly an honor,” said Garcia.

The first recipient of the 2015 East County Educator Award was Kelly Basmagian, principle of Excelsior Middle School of Byron United School District. “When you start the day with love, it changes our culture. It takes a community to raise a village,” said Basmagian.

Sylvia Ramirez, principle of Kimbal Elementary School of the Antioch Unified School District, was the second recipient of the 2015 award.

“I have built my school around this idea of commitment and service. I am very honored to receive this award. I am also proud of what I do. I don’t consider it a career but rather a calling. I live and work in my community,” said Ramirez, “I am very proud of the hard work of the commitment of my staff to provide the best education to all. I support and challenge my students to continue trying their best.”

The César Chávez East County Educator Award recognizes a member of the educational community who demonstrates the qualities of César Chávez and a commitment to student success and equity, particularly for students of color and those from low-income families.

According to Jimenez, his ideas and principles of good leadership involve courage and creativity.

“The best leaders, I’ve seen, tend to be great listeners, great learners and great doers. They help create the future with other people,” said Jimenez.

LMC Puente Students filled the music hall during a presentation carrying hand-made signs adorned in big letters saying things like “Power to the People,” “USA Built By Immigrants,” or “We Shall Overcome.” The Puente students held up signs imitating a protest to demonstrate the power of change and the purpose of remembering the agents of change in the community including, but not limited to, Cesar Chavez and Dr. Martin Luther King Jr.

“We have the freedom and the power to change the world,” Said Puente student Juilian Patino.

In his closing remarks Jimenez said, “I want students to become great change agents,” He added, “We stand on the shoulders of other people and our students are going to stand on our shoulders.”

At the end of the ceremony, everyone in the music hall joined in unison as they sang “De Colores”.