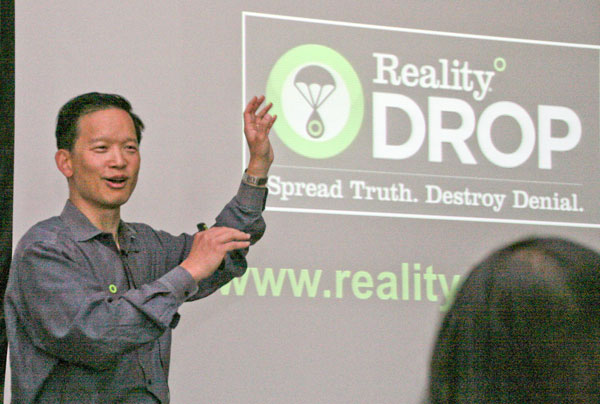 Wei-Tai Kwok gestures, emphasizing the importance of education on pollution.

Los Medanos College played host for a Climate Change awareness presentation on Wednesday, April 24. The presentation, delivered by Wei-Tai Kwok, relayed the importance of the understanding of the effects that humans have on the fragile environment.

Approximately 20 students and staff attended the film and discussion in the Library Community Room L-109. Student Maria Ramirez, a pre-med major with an emphasis on occupational therapy, said that she believes that humans are the main contributors to global warming and that our society is not doing nearly enough to combat the effects. Kwok, a local businessman who works in the solar energy sector, was personally trained by Al Gore to be an official presenter. He has given nine presentations on this topic, and is emphatic that more needs to be done to help our ailing environment. He came to a realization early on the he was “more part of the problem.” The presentation focused mostly on the amount of carbon dioxide that is being pumped into the air, and the little regard that is being given to the issue by lawmakers. Kwok emphasizes the impact that the people have on policy changes, including the ability of the people to “tell your leaders this matters to you.”

He also gave some advice on how a person can limit their carbon footprint. Some of the ideas he presented were: Drink less bottled water; reduce the amount of use of your car, your biggest footprint item; retire old light bulbs; take action in your community.

Policies get changed when people speak up. Kwok urges everyone to write your representatives in order to effect change in our society.