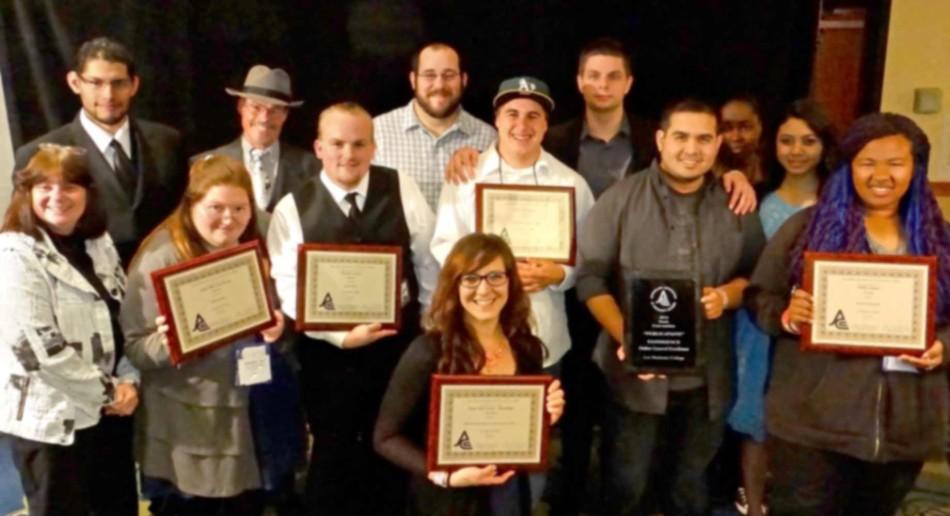 The Los Medanos College Experience was recognized for the talent of its staff and took home eight awards from the 59th Annual Journalism Association of Community Colleges convention last weekend.

The convention ran from April 3 to 5 at the Los Angeles Marriott Burbank Airport Hotel and Convention Center. There was an attendance of 545 students and advisers from 43 community college journalism programs from across the state.

During the convention, students were given the opportunity to attend various workshops and participate in on-the-spot contests.

Editor in Chief Brendan Cross and Campus Editor Joey Delano brought home awards from the on-the-spot contests. Cross won in the On-the-Spot Instagram category for a selection of photos shot and posted during the convention.

Delano won third place in On-the-Spot Editorial Cartoon for an illustrated opinion statement about a presentation on The Representation Project, which seeks to use film and media to correct gender stereotypes.

Being Delano’s first time at the state convention, he enjoyed hanging out with the other staff members and the workshops. “Well, I didn’t know what to expect going into JACC, never been, and I thought it was very exciting,” said Delano.

Delano was shocked to have won; especially with the limited experience he had drawing for the staff. Now, Delano feels more confident about doing more editorial cartoons in the future. Other meritorious awards the Los Medanos College Experience received included Online General Excellence for its news site www.lmcexperience.com.

Although the website is regularly updated, Editor-in-chief Brendan Cross plans to do more with the online website.

“We could always be doing more with online. The idea to move forward is to have people post on it everyday and have that be the main source of news and then we gather from that the best of to put in the paper. That’s kind of the transition we’re trying to make in the next few years,” said Cross.

Staff Photographer Cathie Lawrence won Fourth Place in Online Photo Story/Essay in the Publication Contest for an online slideshow Nov. 20 about the “Queer: The Now” exhibit in the LMC Art Gallery.

Special Projects Editor Kellie McCown received a meritorious award in the Publication Contest Enterprise News Story/Series category for writing and editing an in-depth story about the issue of smoking on campus.

The smoking package, which ran in the Dec. 6, 2013 issue of the Experience, was also the subject of other honors. Former Editor in Chief Peter Costanza and former Graphics Editor Jesus Chico won first place in Photo Illustration for a photographic image illustrating the smoking story. And Chico, Costanza and McCown shared second place in Inside Page Layout for their two-page design of the package.

“I felt honored that my hard work was recognized by an organization that I have so much respect for and with it being my last state convention as a student, so I’m going into interning for JACC on a high note,” said McCown. “I hope that I can make the JACC experience as educational and supportive and wonderful for journalism community colleges journalists.”

Now being back at Los Medanos College and dedicating long hours to putting the Experience out each Friday, there are only four weekly issues left.

“I personally am rejuvenated for journalism. I hope everyone else in the lab is as well. I just hope everyone feels more motivated to get through the end of the school year and make an awesome paper every week,” said Cross.