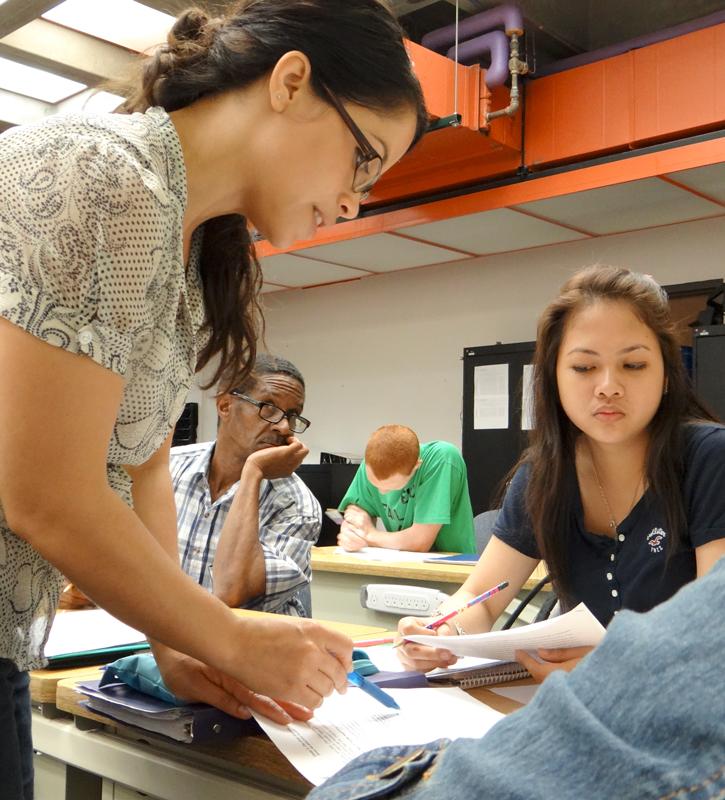 “I want the students who say, ‘I’m not good at English’ to instead say, ‘English might be more challenging for me than other disciplines, but I know it’s just a matter of learning and practice’,” said English Professor Katalina Wethington, who loves teaching English/ESL courses to students at LMC, who knows from personal experience the challenges of language and cultural identity.

“My mom is from the Dominican Republic, but grew up mostly in Manhattan,” Wethington said as she explained her parents’ background.

“My dad grew up on a turkey farm in Fresno.” She talked about how her parents met and the move from the eastern U.S. to the west. “They met in Spain, got married in New York then moved to San Diego,” said Wethington.

As a child, Wethington’s urban and rural life made it possible for her to experience a lot of different types of activities such as fishing, camping, different cultures and traveling. “I am really grateful for that,” said Wethington.

Adolescence brought an onslaught of the normal fears and struggles over identity and how one sees themselves among their peers.

“I think my adolescent years were spent exploring and defining who I was, like most people I would guess,” said Wethington as she explained that most kids enter this phase in high school.

“This time was complicated by trying to tell others what I was,” said Wethington adding, “Was I Black, White, Latina? People were always wanting an answer, and when I started getting these questions in the seventh grade, no one on the West Coast at the time knew what the Dominican Republic was.”

Not being fluent in Spanish made her identity issues all the more difficult. “So I adopted some things from different cultures over the years, tried different ways of dressing, talking, etc.” said Wethington.

During the same interview, she mentioned that she spoke Spanish differently, with an accent coming from somewhere else.

Students in college will often look back and see how they tried fitting in.  Wethington learned labels are nothing but stereotypes saying, “eventually, I learned that those labels were really arbitrary because I identified a little with a lot of things, and defining who I was by race or culture always meant leaving part of me out. Now I don’t think about it much.”

Wethington’s love for reading grew naturally and that is what helped shape the career she wanted as well as the university she attended.

“When I was little, I could be found squirreled away in a corner or with a flashlight under the covers, even hidden in the closet almost always reading a book. I had to get to the end of the story, and often read through the night.”

Her affinity for reading is what Wethington says made learning English much easier for her. English as in understanding grammar and understanding how words are put together in writing and in books. At first, she spoke Spanish fluently but English has since replaced it.

“I absorbed a lot of information about language and how to use it from reading so much,” she said adding, “I enjoyed discussing it and how the author created a certain effect.”

Wethington’s love for reading was natural, but her ability for writing wasn’t.

“Although I studied literature at the university and then creative writing to get my master’s degree, I never saw myself as a writer, but just an avid reader,” said Wethington of her time at UC San Diego adding, “so I guess it was a natural progression into teaching from enjoying language and reading.”

After she graduated from UCSD, she went to Saint Mary’s for additional schooling. During this time she became a tutor at LMC. She then became a full-time professor at the Center for Academic Support.

“I started tutoring first in the Center for Academic Support while I was still in graduate school,” said Wethington adding, “I really liked the student body because they are down to earth, hardworking and they appreciate the help that is given to them, not taking the opportunities given for granted.”

As soon as Wethington graduated, she started teaching at LMC and the full-time position began in 2006.

“My goals are to give students solid, strong skills in English but also to help students feel confident in their ability to do well.”

Wethington teaches with a positive emotion in her class lectures and discussions. She is open to students’ ideas and encourages them to ask for an explanation on a lesson if they’re confused.

“She is always open minded and very passionate about her work,” said LMC student Jared Brannon adding, “she’s very helpful and is willing to explain a lesson or whatever it may be in full detail so students could understand better on whatever they’re struggling on.”

“She won’t leave you out when you raise your hand with an answer. She’ll give you the floor to speak and won’t shut you down right away,” said Brannon adding, “there’s very few instructors who do that and there should be more who do.”

Wethington is open minded and patient whenever a student may challenge her in class.

“I see it as they’re not attacking me but have an answer deep in thought that should be analysis,” Wethington said adding, “looked at in a way as not to prove them wrong but to show them you have the right to question a viewpoint and it’s nothing wrong with it at all.”

You hear daily from students like Brannon that Wethington is a hard teacher with more than a handful of homework assignments, but with good intentions behind it. “‘It’s work, work and more work,’ ask anyone who’s taken her class. It’s crazy but she gives full positive insight on what her reasons are,” said Brannon.

“Homework is to keep their skills going that we talk about in class and apply them throughout their work now, and in other classes in the future,” said Wethington. “How do you learn something and get it stuck inside one’s mind? Practice, practice and practice some more.”

She is a positive influence and respects everyone in the way that people should.

“It’s like a golden rule, you know respect everyone and you’ll get the respect back,” Wethington said, “or from religion, ‘do unto others what you would want them do to you.’”