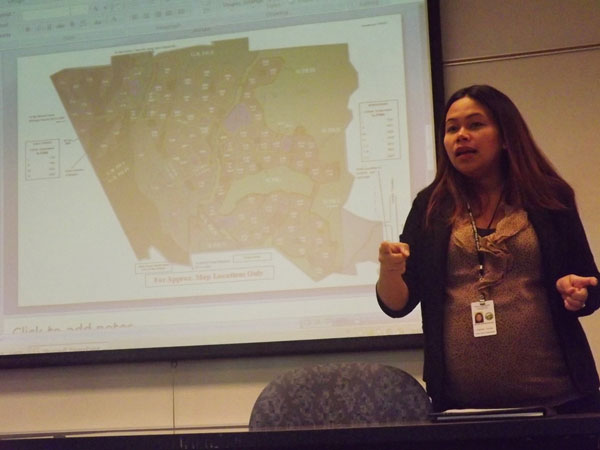 MESA Alumni Billilee Saengchalern dropped by Room SC-227 on Monday Dec. 2 with the purpose to inspire and inform current MESA students on the opportunities that could be achieved if they put MESA resources to good use.

Saengchalern started off giving a little bit of her background. She was born in Davao City, Philippines. When she turned 10-years-old, she moved out to southern California. Next, she moved to Japan for 4 years then finally settled in Concord, California. The reason for her constant change of coast was that her father was in the military.

She Graduated from Mt. Diablo High School. She had originally wanted to become an artist but found out that The Art Institutes price tag was a little out of her range, so she knocked out her general education at Solano Community College in Fairfield, California.

That’s when she discovered that art might not be for her. Then she started to become a little intrigued by Architecture and over time her interest shifted over to Civil Engineering.

Later on, she transferred to UC Davis and received her Bachelor’s in Civil Engineering. Which is now her current occupation.

She was inspired to pursue Civil Engineering when her and her fellow students where on a MESA field trip and her bus passed by the Carquinez Bridge outside of Vallejo while it was being constructed. Watching the bridge’s construction really gave her a view into what her future major could be, and from the looks of things that view really stuck with her.

“Knowing that success is obtainable and if you just keep at it then you’ll eventually get to your goals, don’t give up,” inspirational words from Saengchalern that really stuck with the MESA students that where present.

Gale, a student who attended the event, said that, “I think it was instructive, its good to have information about the career your planning to go and its good to know what’s out there and to see people who have been in the same place as you who were able accomplish their goals is really inspiring.”

Billilee now works with the Contra Costa County Public Works Department and with them she has worked on several projects throughout the county. She was able to work on the early construction of the Pleasant Hill BART.

She also created the entire Preliminary Layout for the railroad in the Byron. Right now, she is currently working the Pacifica Avenue Sidewalk in Mission Vallejo. She tells students to the importance of networking, really getting your résumé out there to important people, interning is also very helpful. With her Internship she was actually able to get paid for her services, earn 3 units for school and she found a mentor that lead her into the path that she walks today.

Saengchalern really went for her went for her objective, to inspire and enlighten the minds of various young people and let them know that with dedication they can all be leaders.