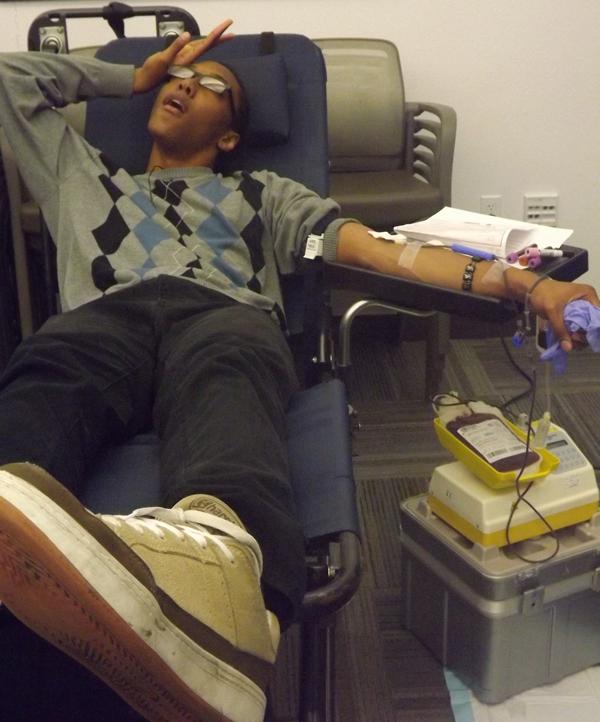 This week, LMC welcomed a visit from an unlikely guest, one who’s after your blood!

The Blood Centers of the Pacific set up shop in Library, Room L-109 on Nov. 20 to await the arrival of various donors. Lots of people came to help out and support this community based, non-profit organization that provides blood and blood components to hospitals throughout Northern California, which in turn are able to help countless patients.

Blood Centers of the Pacific helps 50,000 patients every year with blood donated by community volunteers. Wendy Theisen was the woman that conducted with the whole event with BCP with the purpose to save lives.

Once I heard about the blood drive was here, I couldn’t help but pay them a visit.

This was my third time donating blood and even though it’s the same outcome every time, the process always differs in my opinion. Back in High School it would take about 2.5 hours just to get through one person, it came as a shock to see the donation center so deserted, but because of that the procedure went by a lot smoother for me.

I was greeted by a Doctor named Andrey, and to be honest he came off as a bit intimidating, but once I got settled in he really began to open up to me. He told me that he had donated blood over 103 times! I thought that was unbelievable! He must have really helped a lot of people with his donations. That’s also my reason for going to the blood drive.

After running though the information sheet, he then did the finger prick, which is to count my iron level; I got a 15.6.

According to Andrey, my health is on the right track. But even though I’m a veteran donor I tend to always forget about the finger prick, that’s actually the most nerve-racking part for me, but I got through it. Later on I was moved to a chair where they began to draw the blood from left arm.

The procedure I chose to do was to donate whole blood, which is the most common type of donation. Approximately one pint of my blood was donated. It didn’t take long, I would say it took me about 20 minutes to give the pint needed.

When all was done my body felt a little light, almost like I was weightless. It was actually pretty cool, I was ordered to sit down for about 15 minutes in an area where treats of all sorts were provided like Oreo’s, Capri Sun’s etc. The snacks were there to raise my blood sugar cause I lost a lot of it on that day.

Once again I enjoyed my time at the blood drive, it felt really good to know that this is all going to a good cause. Most of the blood goes to The Children’s Hospital in Oakland, and to know that my donation is going to save the life of a small child is just so breath taking.

The Blood Donation Centers I’ve worked with tell me that with an O+ Blood type, I was able to save the lives of 6 people. The thought that 6 people were alive today was because of me truly made me fell like a Hero. I hope I can encourage everyone to give blood donation a shot. Be a Hero Today!