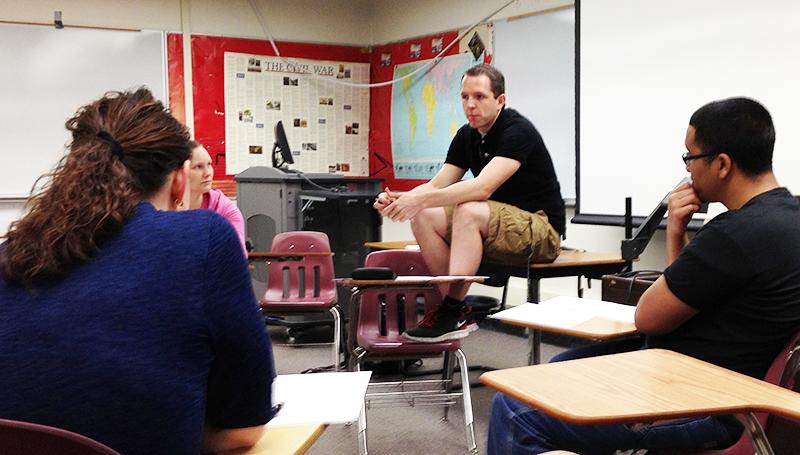 It’s not often that a high school student athlete plays multiple sports and moves on to college to become an academic scholar. That is the case with Chris Orcutt, who went from just getting by in high school to being the only two-term president of the Honors Club.

Orcutt did not pay much attention to academics in high school, he did just enough to get by. To him the wrestling, diving and football teams were more important.

“I kind of did as least as I could just to slide through,” he said, but now he looks back at his sports accomplishments and, “I kind of see that as irrelevant now, because they were so long ago.”

For him college was a new start to his academic career, and thanks to a friend who dragged him along, his college career started with the Honors Club, and now continues at UCLA where he is a new transfer student.

Orcutt is the eldest of three boys and went through what he called a typical middle-class life, growing up in Antioch. He had to be strong for his brothers as his parents each have now been married and divorced twice.

His time on the diving, wrestling and football teams gave Orcutt a lot of experience in sports that require leadership skills. That experience, plus being the eldest of three, may have been a factor in making Chris the leader he was in the Honors Club.

In a meeting for the Honors Club last spring, Chris took his spot at the front of the room. He stood there tall, slim surveying the room before he sat atop a desk, high above everyone else. He passed out the agenda and spoke calmly, quietly and confidently as he went over the list, but while he spoke he clicked his pen relentlessly showing a slight nervousness.

The nervous tick is not something that slows him down though. He worked through his nervousness as he ran down the list point by point, and the group decided how they wanted to set up the end-of-the-year party. He led the meeting flawlessly, even asking one member of the group to turn off the volume on her computer as she took notes.  The meeting ended as he called for a vote and the group decided on the spot and the budget for the event unanimously.

This is a small example of the leader he became at LMC. Mitch Schweickert, a recently retired chemistry professor, describes Orcutt as a leader who has a good idea of what he wants done.

“He is a quiet but effective leader,” he said adding that he, “Leads by example. Does things the way he thinks they should be done.”

But the Honors Club is only a small part of what Orcutt did on campus. He was also a tutor for math, engineering & science achievement, the math lab, helped found the LMC branch of Circle K and was on the winning team in the annual Academic Competition two years in a row.

His life at LMC consisted of spending 12 hours a day on campus because of all of his extracurricular activities. This didn’t leave a lot of time for him to spend with his family and girlfriend, so when he found free time, he spent it lounging and enjoying time with them.

For him, all the extra activities were worth it. His favorite times at LMC involved participating in activities like the three honors retreats he attended, which were the highlight for him each year at LMC. The Honors Club philosophy group has been a favorite of his in his years at LMC.

“Each semester it has progressed into something a little different.  That’s been a fun experience that I enjoyed doing,” he said of the group.

All of his hard work paid off.  Orcutt applied to five UC’s, Los Angeles, Berkley, Davis, San Diego and Irvine and was eventually accepted into UCLA, which is where he wanted to be.  He recently attended and participated in a six week summer session.

“The pace is much faster than that of LMC,” Orcutt said.

He continues to live off of about 7 hours of sleep a day, but the only reason he gets that much is because he uses his free time to sleep.  “The pace is fast. Period.”

Wherever he ends up in life, he will always be remembered at LMC.

“I’ve been here 34 years, and Chris is a student I will remember for the rest of my life,” said Schweickert.