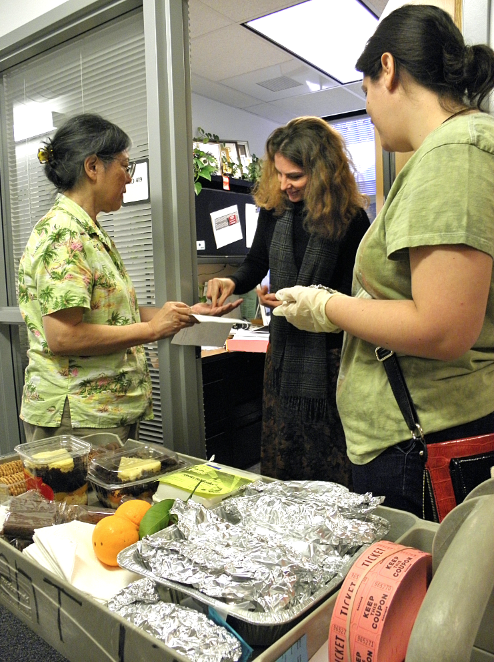 The Reading and Education Advance Dreams (READ) club organized a barbeque day event on the bright and clear day of Feb. 6.

READ is a group focused on the promotion of both reading and education at Los Medanos College. They were prepared hot dogs in front of the Student Life Center with Ashley Adams on grill duty.

Music was playing in the background as few patrons made their purchases and mingled with READ staff.

The goal of R.C. Kubota the coordinator of the READ “is to create and grow a text book loan fund for financial aid students whose first check has been delayed.”

Kubota went on to state, “No student on financial aid should have to start the semester off feeling behind or defeated.”

Charles Klein, also a member of the READ Club, likened Kubota to a “light shining in hell” when referring to her work in procuring funding for books.

“Books for the Barbeque Day sale were donated by Friends of the Library,” according to Kubota, “so the profits are clear and all profits go to the book loan fund.”

The prices for hard copies went for $2 while paper copies left tables at $1. However, the hot dogs began at $2, but due to slow sales the price was immediately sliced to $1 per dog. Kubota says that they only sold between 12 and 15 hot dogs and as a result of the poor food sales READ sold more books than dogs.

“We made more walking around the campus than we did in front of Student Life and we sold more books than hot dogs,” said Kubota.

A drawing was held where contestants place their raffle tickets in buckets with their prize choices. There were five winners, three of whom were unfortunate enough to have chosen the same prize. Therefore, winners were forced to except prizes they were not interested in.

The result of the days fundraising effort was a grim dissatisfaction for Kubota and READ. The next event to be aware of is Club Day occurs next Feb. 13 in the indoor quad area from 10 a.m. to 2 p.m.

READ club meets on Wednesdays at 2 p.m. in room CO 211 in the drop-in lab conference room.