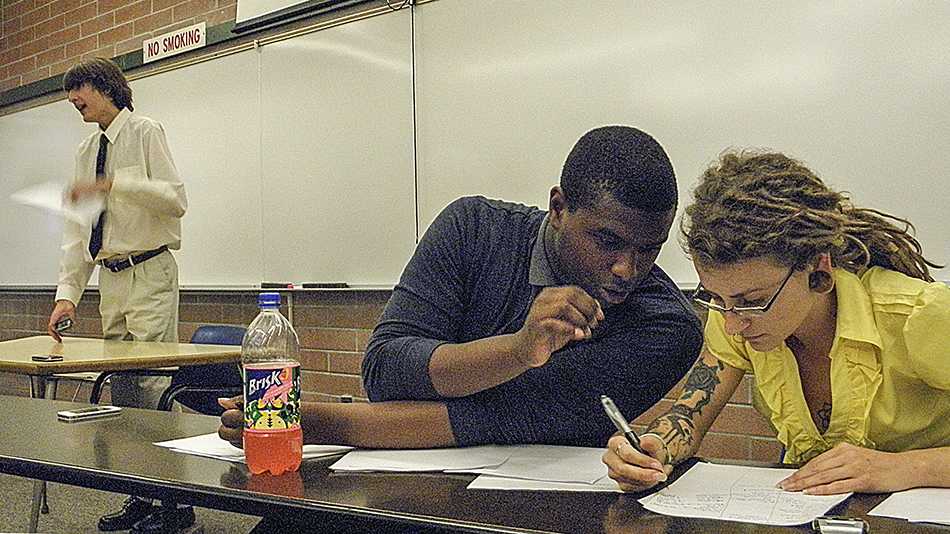 Debaters from as far as Santa Rosa Junior College came to compete in the tournament.

Under a parliamentary schedule divided into six rounds, with one hour in front of a judge, debaters split into teams of two and were given topics involving the U.S. government, the Fisher v. University of Texas controversy, and more current issues.

Forensics Director Kasey Gardner describes his students as “warriors” for having the endurance and energy to last in a two-day tournament filled with passionate and fiery competitors.

Participating in such an intense debate was new for Denzel King, who shares his experience.

“When it comes to other schools and what not, it’s actually an eye-opener to us as a debate team,” said King who pointed out how intense the debates can be in each round. “Especially for Ashley and I because we know a lot of the people we compete with.”

To be a debater, students must invest a lot of time dedicated to making themselves familiar with a variety of issues.
“It’s an amount of stress for them to get off work, and battle their other commitments and make sure they have time to debate, so they can do school and work and family, and compute at a high level,” said Gardner. “I admire them for that.”
With debates requiring a large amount of mental energy and diligence, how do busy students prepare themselves for verbal battles?

“We usually prepare by running briefs on topics that we think are coming up at the tournament, and we also have practice rounds,” explained Gardener.

Debate rounds were critiqued based on the judge’s interpretation of the arguments made by both sides. Judge Marie Arcidiacono details what they look for in each team.

“The first thing that we do as judges is evaluate the debates in terms of the teams, which team won the argument—and there’s only gonna be one winner—and then, unfortunately, there’s the team that lost the argument,” said Arcidiacono. “The second thing that we do is evaluate all four of the students in the round in terms of their overall presentation… and we rank them as first speaker, second speaker [and so forth] in the round.”

In one round, Callagan and Noble encountered a particularly difficult team.

“We tried our best to ignore the interruptions [the other student team members] were making during our speeches,” said Callagan. “Not that questions during a debate speech aren’t allowed but there was a underlying tone of rudeness.”

Being a good sport was the best way of learning from the experience.

“Aside from all that we enjoyed the challenge of debating them. They were a prepared team and we give them props for winning the debate [in that round],” he said. Others were less fortunate and learned the hard way.

In the third round Friday concerning the Fisher controversy, student Evan Mullicane said he was called a racist for arguing that minorities are at an economic disadvantage for education.

“The topic that we took on was affirmative action, and with that topic it was obviously very racially charged, and so it was very easy to have some minor slip-ups in language,” said Mullicane, who added that he had to consider choosing his words carefully.

But the other team took advantage of his comments as racially condescending and essentially won the round.
Mullicane expressed disappointment, “I was just done with debating because we had just got done losing two rounds in the tournament so it wasn’t going very well at all. I did word some things very poorly, but we tried to rectify it later and correct ourselves but the other team just wasn’t having any of it.”

On Saturday, after the last two Parli Rounds, the Elimination Rounds commenced and LMC’s debaters survived the elimination, but not the finals.

At the end of the event, the judges had announced Ashle Davenport and Nick Turney, debating in the affirmative side of St. Mary’s College of California, as the winners of the Novice Parli Debate with a score of 3-0, and Todd Guy and Josh Wilkerson of University of Nevada, Reno, winning the Open Parli Debate with a 3-0.

LMC debaters Callagan and Noble were happy with their own success.

“Nyssa and I were very excited to hear that we had made it to the elimination rounds,” said Callagan, on behalf of himself and Noble. “It was great that we were able to represent LMC, even if it was ninth place in Novice.”

For the future, the team is looking to earn higher rankings and, of course, eventually become number one in the competition.

Mullicane feels that he “needs to get more structured and more organized,” as he is new to college debating.
King describes the joy of arguing in debates.

“If anything, I just love doing it because that’s how it was at the tournament, being all confident, just engaging in the argument as [other debaters] were pushing us to the challenges and whatnot,” said King, whose debate partner for the competition was Ashley Curry.