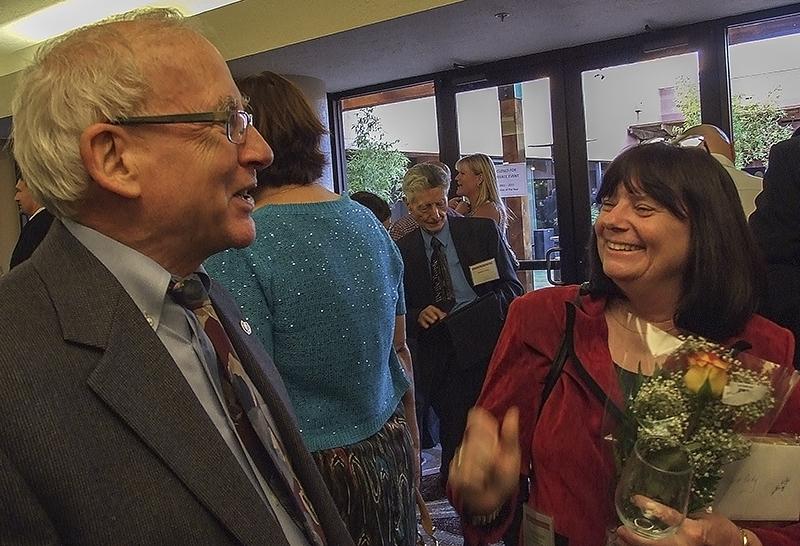 “She’s all around fabulous,” said Lourie Hauffman who nominated McGrath for the award. “She’s dedicated to her students and is fabulous working with people. She’s a great leader.”

McGrath started her career at LMC 24 years ago, taking over the journalism program from Richard Livingston, who is now serving as Dean of Instruction.

“I am lucky to have her to follow in my footsteps,” said Livingston who started the student newspaper 38 years ago.

Along with her prestigious awards, McGrath has also touched students and teachers alike with her knowledge of journalism ethics, political prowess, and teaching philosophies.

“Cindy is completely transparent,” said math professor Michael Norris. “She is always open and honest about how she feels and what she is thinking. Her moral ethical stature is squeaky clean, not a speck of dust, almost to a fault.”

Lawrence Thrall, who served as Editor in Chief in 2001, remembers McGrath as a teacher that cared about her students inside and outside of the classroom.

“I learned so much about journalism as a craft, and about myself too,” reflected Thrall. “I don’t think I would be where I am without her guidance and inspiration.”

Sports editor Chris Chard mirrors Thrall’s admiration, and says that McGrath is the driving push behind his writing improvements.

“Cindy is a great instructor,” explains Chard. “ She took time out of her busy schedule to sit with me one on one on several occasions to help me improve my writing and editing skills. Without her guidance, I would not be able to write the way I do today.”

Editor in Chief Peter Costanza also feels that without the encouragement of McGrath, he would not be where he is today.

“I would not be taking journalism if it wasnt for Cindy,” said Costanza. “I was in her Journalism 10 class, and she really encouraged me and showed me my potential in this area of study.”

Next year, the award of Contra Costa Teacher of the Year will be given to an instructor at one of LMC’s sister colleges, but the impact McGrath has had her on students and colleagues will continue to grow, as well as her admiration for her students.

“The most profound thing I’ve learned in my 24 years as the advisor to the student newspaper,” ponders McGrath. “Is that students will go to any lengths to protect the freedom of expression.”