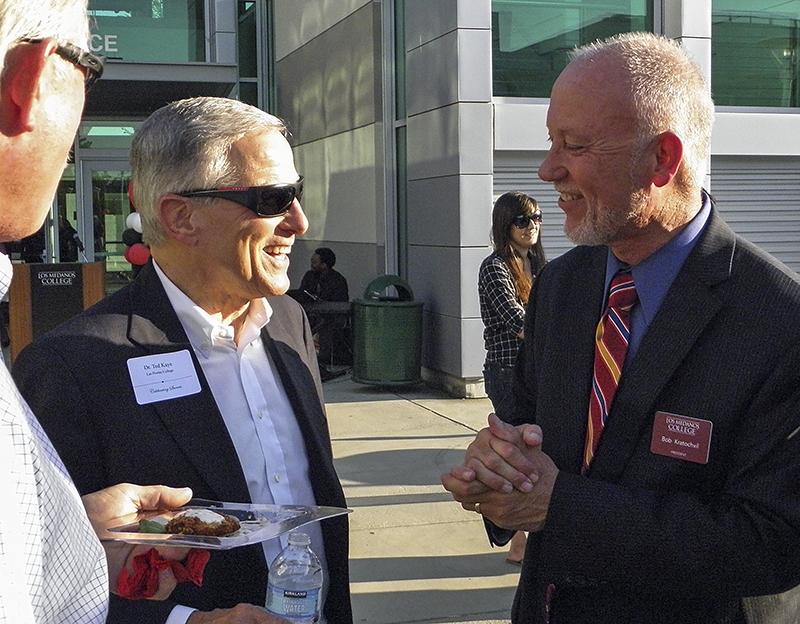 Outside the front of the Science building on a hot, early Thursday evening was a public assembly held for Bob Kratochvil in celebration of his transition from Los Positas College to Los Medanos College as the sixth permanent president.

Dozens of guests — including faculty, staff and students from both Los Positas and LMC, members of the Contra Costa Community College District and other community figures from all over the Bay Area — greeted Kratochvil while enjoying a festive variety of food.

Guests waited eagerly to meet, and for some reunite, with the new president while enduring the long-lasting heat of the late afternoon.

Guests were able to mingle while enjoying music and food, and meet with Kratochvil before the festivities of the night began.

CCCCD Chancellor Helen Benjamin began the evening by discussing what the utmost importance of a college is; deciding its leader.

“If you get though [that gauntlet], then you gotta’ be one of the best,” said Benjamin. She considers Kratochvil as the “very best in the field.”

As Kratochvil came up to the podium, he expressed his gratitude to be working with the CCCCD.

“I feel so fortunate to be working with the fine leaders of those two colleges, Dr. Denise Noldon of Contra Costa College and Mr. Peter Garcia of Diablo Valley College,” Kratochvil told the crowd.

He also gave his thanks to the community and its voters for the newly erected math, science and library buildings.

“Our students would not be learning in these beautiful buildings,” said Kratochvil. “And for that we can’t thank you enough.”

Kratochvil boldly states that he doesn’t call LMC a second-resort institution or a back-up plan.

“Los Medanos is truly a wise first choice for students from all over,” said Kratochvil.

Kratochvil continued on to recognize Benjamin, stating that she’s an extreme honor to work with, and that he looks forword in continuing to do so at LMC.

Joseph Cook, a US Marine of 11 years, knew Kratochvil since his time at Los Positas, where he interacted with various student organizations there.

“Mr. Kratochvil is one of the [most] outstanding, dynamic leaders I’ve had the pleasure of working with,” expressed Cook.

Although Cook is sad to see Kratochvil leaving for LMC, he still feels optimistic that Kratochvil will do wonderful things for the college.

Jeffery Michaels, who is an united faculty member, only knew Kratochvil for a short time earlier in the year during the college candidate elections, but he feels that LMC is “lucky” to have someone as dynamtic as him as president.

Kiran Kamath has been dean of career technical educaton for LMC for 22 years, succeeding Richard Livingston. In the short time she’s had to know Kratochvil personally, she feels that he’s “the real deal.”