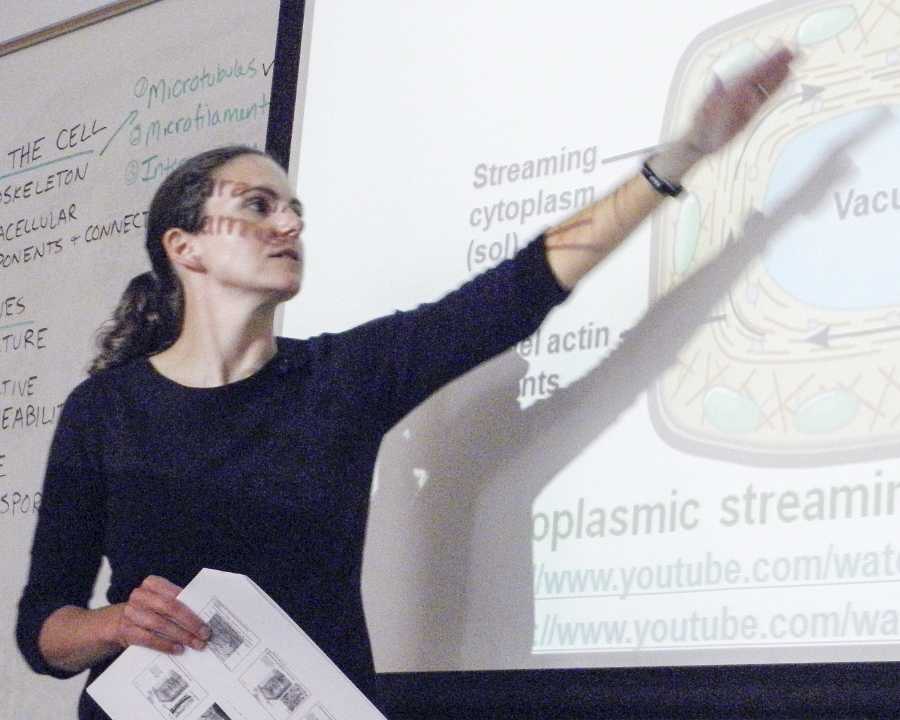 Back to school time was exciting to me,” while most kids dreaded that first day of school Danielle Liubicich stood out from the rest.

From being a nerdy kid that wanted to learn about science to eventually earning a PH.D in biology, her adventures seemed endless with many more to come.

However, the events on 9/11 changed Liubicich’s path, a path only few would be brave enough to face. That personal empow- erment of following an independent path.

“[It] was one of those moments where you just moved away and you’re waiting on the phone tr ying to find out if that side of the family is still with you,” said LMC

biology Professor Liubicich. Reminiscing on some of her toughest

obstacles she had encountered lead her to being blessed with good mentors who would help her on the way to a career in biology.

Liubicich’s journey starts all the way on the other side of the country in the east coast state of Connecticut, also known as the suburb of New York and Boston.

Her father grew up in Italy, until the age of 8 when he then came to live in Brooklyn, New York. From being unable to speak English, to later starting his own business shows he found that anything is possible.

The same goes for Liubicich’s mother who lived the dream of being a ballerina at the young age of 18 moving to New York and traveling all around Europe.

This inspiration from her mother and father encouraged Liubicich to want to branch out on her own. Neither of Liubicich’s parents attended a four year college, so this was new to her family.

Liubicich remembers the experience of going to Italy with her grandparents who had moved back when she was a kid. The excitement of learning about the culture and not being able to speak the lan- guage really was amazing. The similarities of her parents paved the way and lead Liubicich to her own adventure.

Liubicich could never for- get those memories of being outside, swimming in the lake and checking out what grows inside. Ever since she could remember, the outdoors and science have been a passion that has fueled Liubicich’s drive to learn more and explore beyond the horizon. Living in Connecticut, Liubicich attended schools that offered liberal arts, with small classes allowing plenty of attention from the professors. The eagerness to get more hands on experience by working with faculty in the labs provided Liubicich with good mentors. Her only problem was not knowing what to do with a biology major.

With encouragement from her teachers and resources at her fingertips helping her find what colleges could offer, the most useful information avail- able became easy to discover, all it took was one question. Out of all achievements Liubicich had accomplished, the greatest was that of asking one simple question.

“If you don’t apply for things you won’t get them so you might as well apply for ev- erything, you never know,” she said.

Liubicich took that advice and ran with it, all the way to Australia for one year. From there she traveled to Chicago to star t Grad school then moved to California to finish. This educational path lead Liubicich to her PH.D in Biology. Before pursuing biology, Liubicich took a stab at Med school. As an undergraduate she took the EMT class and became certified but soon thought to herself maybe this wasn’t what she wanted to do.

“Who does that just for fun I didn’t know what I was doing,” said Liubicich with a big smile.

When Liubicich decided on a career in biology, she knew she wanted to give back to the community by creating new programs to get more people involved. Her professor in college she mentions was the most influential she has encountered. She became a good mentor, teacher and a scientist, showing how many things could be done as a biol- ogist. This idea led Liubicich to the conclusion that she didn’t have to pursue medical school since her passion offered so much more.

Looking back Liubicich sits and revisits her first day working at LMC. She was surprised by the number of students who wanted to enroll in biology courses. Being the teacher instead of being the student puts Liubicich in a great position to help those who desire to pursue biology. Through the rough times and obstacles Liubicich faced, none were enough to stop her from becoming what she wanted to be. Remembering waiting on Sept. 11 2001 for that phone call to find out if her family was safe. Not knowing where our world was headed Liubicich took on the challenge of the unknown by herself.

“See yourself through it and then see that’s empowering on its own,”said Liubicich.