Club Sabor Latino swings into Rhythm Of The World 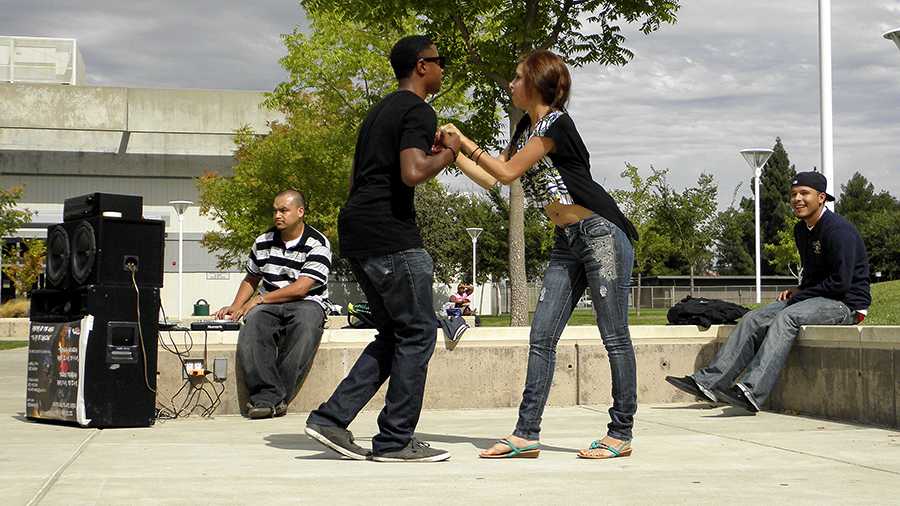 Rhythm of the World dance club previously known as Sabor Latino will be playing music in the outdoor quad Monday through Thursday from 3 to 6 p.m. for the rest of the semester. They will not only play Latin music, but all genres that make the body move.
The club’s intentions are to bring people together who share passion for dance and music while uniting different cultures.
“We recently changed our name last spring because we wanted to bring in more cultures of music not just latin,” said Erick Silahua. “We wanted to expand so we use to do a lot of salsa and merengue, but now we do a little more hip-hop. Also, we started doing dub-step and techno.”
Silahua has been a member since last semester and is one of three people you may see behind the speakers playing the up-tempo music.
“We will welcome anybody. It doesn’t matter how good of a dancer they are. Even if they don’t know any of the steps and if their good dancers then maybe they can teach us something. If they want to learn we can try and teach them what we know, it’s really just us trying to teach each other,” said Silahua.
The music is being introduced to bring awareness to the LMC students who are seeking new membership and has aspirations to provide its members with scholarships through fund raising events.
“We’re really trying to get a lot more people involved, because later on in the future we would like to start fund raising, and also give out scholarships to people who are a part of the club, or who are going out in the dancing world, or just music overall,” said Silahua.
The sound carried throughout the quad echoing off the concrete walls, as people sat and studied, some were walking by while stepping to the beat, and others stopped for an interesting and fascinating dance lesson.
“I think it’s a good idea. It spreads culture around, and people don’t usually do that. It’s nice and refreshing,” said Zohal Rahimi.
Michelle Garcia is the most experienced dancer, she started dancing florico in Mexico when she was 5 years old performing in festivals, and has learned different styles of dance over the last 15 years. She explains that there are all types of dances for those who are ready to learn.
“You don’t have to be Latino to dance to Latin music, and you don’t have to be African American to dance hip-hop,” said Garcia.
If you enjoy getting down, cutting a rug or just like to shake it then you may want to check out the Rhythm of the World club and bust a move. For more information email Garcia at: bailarina199252@yahoo.com