Senates pass no confidence vote in governing board 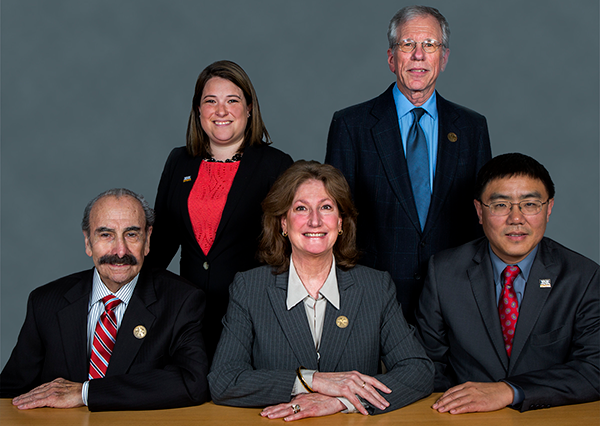 The members of the CCCCD Governing Board

The Los Medanos College Academic Senate and Classified Senate have each passed a resolution of no confidence in the Contra Costa Community College District Governing Board that oversees the three district colleges. Their decisions in late September followed action that had already been taken by the Classified and Academic Senates of Diablo Valley College.    The presidents of DVC’s senates attended the Sept. 28 LMC academic senate meeting to explain the reasoning behind the joint resolution their governing bodies passed Sept. 22 and to urge LMC to do the same.

“It’s been something crazy that I’ve never seen in my almost 20 years in the district,” said DVC Classified Senate President Marisa Greenberg.

The resolution acknowledges the anonymous accusations of ethics violations against trustees Greg Enholm and Vicki Gordon, the shock at the decisions not to extend contracts for several members of upper management at the district office, and the lack of unity among the governing board members.

“They’re no longer making their decisions based on the best interest of the district and our colleges,” said DVC Academic Senate President John Freytag.

Both Enholm and Gordon had anonymous complaints made against them in 2019. The complaints against trustee Gordon involved financial conflict of interest and a “pay for performance” raise for former Chancellor Fred Wood without doing an annual evaluation, though the first allegation was sustained by the investigation and the second allegation was not.

The district retained Joie Grimmett, an attorney investigator for the Titan Group, to investigate the allegations and in a July 8 letter to trustee Gordon, board President Rebecca Barrett explained that the investigator’s findings appeared to uphold some of the complaints.

“During the investigation process, Ms. Grimmett  received additional evidence that suggested Gordon had consistently engaged in other areas of potential misconduct, to include making harassing and/or inappropriate communications to other board members and district employees.”

Trustee Gordon responded to the investigation with an open letter dated Aug. 17, in which she wrote:

“I understand that a letter concerning me has been circulating as part of a deliberate attempt to smear my good name … I categorically deny any ethics violations as are being alleged.”

Later, in an interview with the Experience, Gordon added:

“If you look at the report, the report is very questionable, there are so many flaws and biases in it. It is based on hearsay.”

Barrett had written another letter dated July 8, this time to trustee Enholm, and she described the allegations against him,

“That complaint alleged that you harassed Chancellor Fred Wood and used ‘veiled threats’ in an attempt to influence him to take specific actions in July and October of 2019 to benefit faculty [name redacted].”

The district retained the services of Attorney Investigator John Kochan with Van Dermyden Maddux, and the evidence gathered during that investigation supported the allegation that Enholm had inappropriately advocated for a district faculty member to be reclassified. The allegation of Enholm inappropriately advocating for a faculty member’s application for the Contra Costa College president position was also supported by the evidence. Though the allegation of Enholm making “veiled threats” was not sustained.

When asked about the allegations, Enholm wrote:

“In the first anonymous complaint, I was surprised that the professor was not even given an interview in the hiring of the interim Contra Costa College president and stated I thought he should at least be interviewed.  In the second anonymous complaint, I was again surprised that the same professor’s request for a reclassification appeared to be treated in an atypical manner. Quite frankly the complaints against me are at the same level as receiving a parking ticket on days when street cleaning was to occur.”

On top of the allegations and findings from the investigations, the board itself has become fractured. The board conducts an annual self-evaluation in May of each year, and this year’s evaluation was assisted by Collaborative Brain Trust consultant Brice Harris.

In the evaluation process board members are given a questionnaire to fill out and each has an interview with the consultant. The findings from this year’s evaluation show that the board is not working as a cohesive unit, and that politics are affecting decisions.

One section of the evaluation included anonymous quotes from each of the board members. When asked, “what is your assessment of the overall performance of the board?” the members answered with “not well,” “we are terrible,” and “we don’t trust one another so we can’t find agreement.”

Editor’s note: The Experience has previously covered the decisions not to extend the contracts of three upper management district employees. To read more about that please visit the story here. To view the board’s self-evaluation, follow this link. To stay up-to-date on board decisions or to attend the next board meeting, please visit the district website.