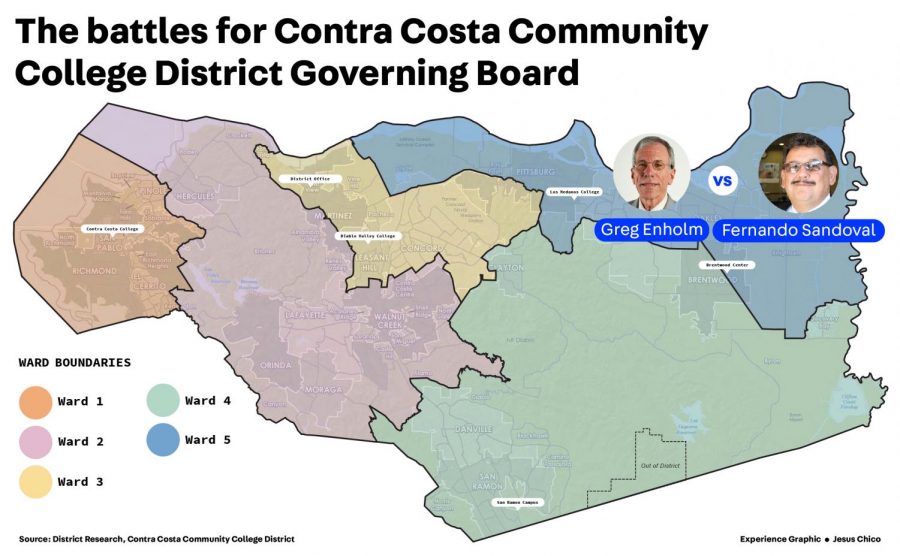 In a replay of the 2016 election, voters will again have the opportunity Nov. 3 to decide between incumbent Greg Enholm and challenger Fernando Sandoval in the race for the Ward 5 trustee to serve on the Contra Costa Community College District Governing Board.

Four years ago Enholm had just finished his first term and Sandoval was running in his first-ever election. Today, Enholm has another term of service under his belt and Sandoval has shaken the dust off his rookie campaign. Both candidates reflected on this.

“With my eight years of experience, I know what’s possible,” said Enholm. “I can distinguish with what would be pie-in-the-sky, not achievable, and what is actually possible.”

While Enholm has been touting his experience, Sandoval has been reaching out to voters and promoting his collaborative approach.

“In 2016, I started late, nobody knew me, I ran a totally grassroots campaign…even though I was a newcomer, I still got almost 40% of the vote,” said Sandoval. “This time, I started a lot earlier, I’m making sure that my message is consistent all the way across the board on why I’m running and what I think we can do from a collaborative perspective.”

Foremost in his second campaign effort, Sandoval spoke about the importance of the community, the people within it, especially the students attending district colleges.

Enholm is confident his body of work as a two-term trustee speaks for itself as does his familiarity with the community. He said he prioritized the construction of new facilities for Los Medanos College students and was instrumental in getting the funding to do so.

“At my second board meeting in January 2013, I proposed to have another bond to put some crucial buildings up. We now have a student union building at LMC,” he said. “The old PE building…I said we needed to replace it, so those are two buildings that quite frankly, wouldn’t be there if I hadn’t said…this needed to be done.”

If elected to another term, Enholm said it’ll be a priority to focus on jumpstarting college courses at the high-school level and he also stressed the need to bring more jobs to the area, something he learned was important from community members at the various city council meetings he attends.

“We need more jobs and careers in East Contra Costa, I hear this all the time…people are tired of hour-long, two-hour long commutes,” he said.

If Sandoval succeeds in unseating Enholm, he said his top priorities include – student engagement, creating internship opportunities and building bridges and connections within the community.

“I’m continually making more and more relationships with key people in our education system as well as our community leaders because they need to understand that the college is an asset for the community,” he said. “Let’s build those relationships so we can drive internship opportunities…we have to talk to the businesses to talk about all the young talent that they have in their community, right at the college.”

Both candidates have a financial background. Enholm previously worked as a financial economist, securities analyst and operated his own financial advisory firm before settling in East Contra Costa in 1996. He also taught mathematics at both high school and college levels.

Sandoval grew up in Pittsburg, leaving at age 17 to join the Navy. After his service, he embarked on a career in finance and emerging technology, holding positions as a Global Relationship Manager and International Banking Consultant for some top banking institutions before returning home to the East Bay.

Despite his accomplishments, incumbent Enholm’s tenure on the board has not been without controversy. Last year, he was named in anonymous complaints of ethics violations that he used his position to pressure the previous district chancellor to promote the classification level of an unnamed LMC professor and also encouraged this same professor be considered for president of Contra Costa College. Enholm signed a resolution agreement regarding the complaints in July 2020.

“In the first anonymous complaint, I was surprised that the professor was not even given an interview in the hiring of the interim Contra Costa College president and stated I thought he should at least be interviewed,” Enholm remarked. “In the second anonymous complaint, I was again surprised that the same professor’s request for a reclassification appeared to be treated in an atypical manner.  Eventually, the board approved that reclassification as requested by the professor.”

Separate of the complaints filed against Enholm, the governing board itself has recently been mired in controversy over split decisions to reject contract extensions of three long-time district administrators.

In response to the controversy, Enholm said, “Split votes reflect the differences, but 95-99% of board votes are unanimous. The three board members who voted against extending the contracts felt the new chancellor should have the opportunity to meet with and assess the three administrators.”

Sandoval is aware of the current unrest within the governing board and explained that if elected, he will stress the importance of collaboration and trust.

“All my life I’ve been a bridge builder,” he said. “I’m going to have to earn the trust of the other board members…the best way to do that is building relationships…you’ve got to let people know you’re vested in their success and that your success can only happen with their support.”

While a lot can change in a four-year term and both candidates have their own set of priorities, Enholm and Sandoval share one concern in common – the districtwide disruptions caused by the pandemic.

“With COVID and distance learning, it’s not easy…for the students, it’s hard for them…the faculty had to figure out how to do their curriculum,” said Sandoval. “How do we make sure our campuses are safe when we reopen? That’s something that has to be looked at.”

Enholm stressed the importance of safety as well.

“I’m willing to do everything necessary to ensure that there is no COVID-19 infection as a result of being on our campus,” he said.