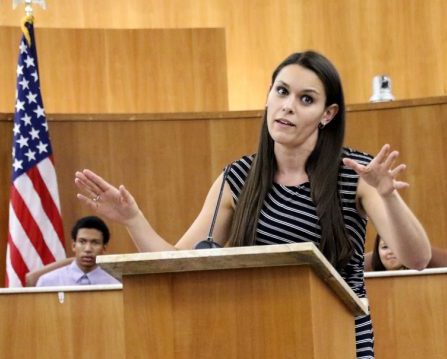 LMC speech professor Marie Arcidiacono speaks at the lectern during a debate in the Pittsburg City Hall Oct 30, 2015.

Academic Senate Vice President Marie Arcidiacono Kaufman is stepping down from her position to go on maternity leave through the fall semester.

Kaufman says this is so she can “begin a new adventure” in her personal life. This change will surely be different for everyone involved.

“I will surely miss my working with my Senate Colleagues and the members of the Senate Council, President Josh Bearden and Treasurer Ryan Hiscocks, and our wonderful Classified Professional Abbey Duldulao,” she said.

Academic Senate Vice Presidents have a term of four semesters, or one full academic year, and Kaufman is retiring after her third semester in the position.

“I have enjoyed my time serving as the Vice President of the Senate,” she said. “I have learned so much… as well as [getting] to know and work with many wonderful colleagues who I might not otherwise have had the chance to work with.”

The senate is electing a new vice president to replace Kaufman. The new VP usually serves a full four semester term, which means Kaufman will not be returning to the position.

“LMCAS is learning to adapt to this situation similarly to everyone else,” said Thyra Cobbs LMC’s Associated Students President. ”It’s a learning experience and I’m curious to see how it’s going to work out.”

The senate extended deadlines to apply for the VP position to April 21, with the intention of giving candidates “15 minutes to provide an oral presentation at the April 27 senate meeting,” according to Academic Senate President Josh Bearden.

The Academic Senate is a group of faculty members made up to decide issues pertaining to Los Medanos College students and its interests. The senate often works with the LMCAS and the Shared Governance Council to make decisions for the college.

Some of the senate’s responsibilities include discussing items like; curriculum, degree and certificate requirements, or grading policies. They also give a voice to the development of hiring criteria and the appointing of members to serve on college committees.