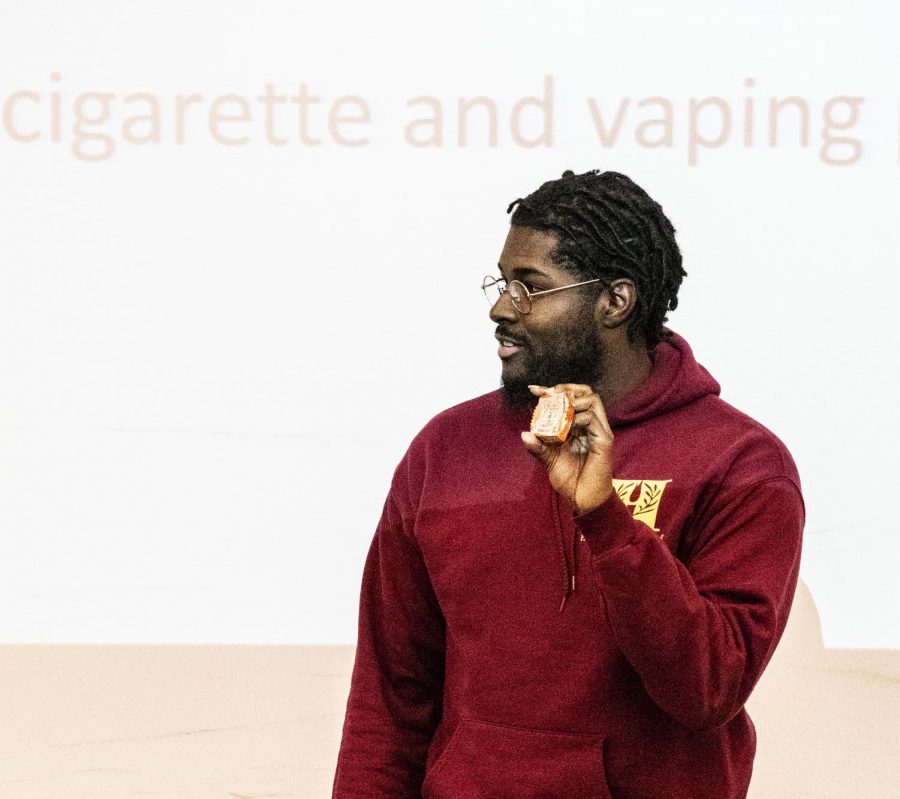 Felero Smith uses a Reeses to make a point about vaping.

The Los Medanos College Debate Team held their public debate for the end of the semester Wednesday, Dec. 4 from 4:30 to 6:00 p.m in the Library Community Room 109.

The goal of the public debate was to demonstrate the International Public Debate Association format to interested students, and provide the LMC community with a fun event that showcased the skills of the Debate Team.

The LMC Debate Team just recently adopted a new debate format this semester, as the coaches were actively learning it with their students.

“Our students have had a successful transition to IPDA, and it’s been gratifying to see how they learn more about the traditions and expectations of the format at each tournament,” said Co-Director of the Debate Team and LMC Professor Star Steers.

The debate featured two separate topics, argued by veteran and novice debaters from the team. Each round took approximately 26 minutes and each side got to argue their point for 13 of those minutes, as broken up by the IPDA format.

Veteran Debaters Kelly Williams and Felero Smith began with the motion that “Contra Costa County should ban all e-cigarettes and vaping products.”

Williams represented the affirmative, arguing for the banning of e-cigarettes and vape products in CCC. Arguing three main points,  Williams demonstrated the effect banning will have on us as a united front, adolescents and future health issues or harms.

Smith served as the negative, arguing that the “customer is always right,” and each individual has a right to their autonomy. Smith also provided Williams with a counter-proposal, fighting for proper regulations on these e-cigarettes and vaping products, as opposed to completely banning them.

Following shortly after the first debate, unofficial debate team member William Malovich presented the second topic of the day: aliens would be unimpressed by humans.

Novice debaters Isaac Pacheco and Marianna Berntsen-Perez took to the podium and prepared to present their arguments.

Because their has been no evidence of aliens in our solar system as of yet, Pacheco and Berntsen-Perez had free rein of the imagination going into this debate.

“This [debate] is a sport of the imagination,” explained Steers before the debate began.

Berntsen-Perez served as the affirmative in the debate, supporting the motion that aliens would not be impressed by humans. Listing the three reasons why they wouldn’t be impressed, Berntsen-Perez argued that life critiques art, humans don’t know how to work together and we do things that don’t make sense.

“I’m pretty unimpressed by us as a species. It’s painful to be human,” said Berntsen-Perez during her introduction argument.

Pacheco followed up by rebutting Berntsen-Perez’s arguments and explaining that aliens would be impressed by humans because of our survivability and psychology.

“Aliens don’t know what we are, and that’s why they’ll be impressed,” argued Pacheco. “We are humans. We start off as nothing, and we become something. We are undefinable.”

The public debate concluded after a fierce round of back and forth by both groups of debaters, and the crowd of 50 was left in shock by the skill of the debaters.

Malovich also explained that students should consider joining the Debate Team next semester, as “In everything we do in life, we always have our voice.”

Steers concluded the event by expressing the benefits of joining debate, such as overcoming one’s fear of public speaking. The Debate Team meetings are open to the public, and will begin again next Spring ‘20 semester in Room CC1-117 from 3:20 to 6:30 p.m. every Wednesday.

“I am beyond proud of our team and I hope more students will realize that they too can have success as debaters–they just have to come and join the team,” said Steers.