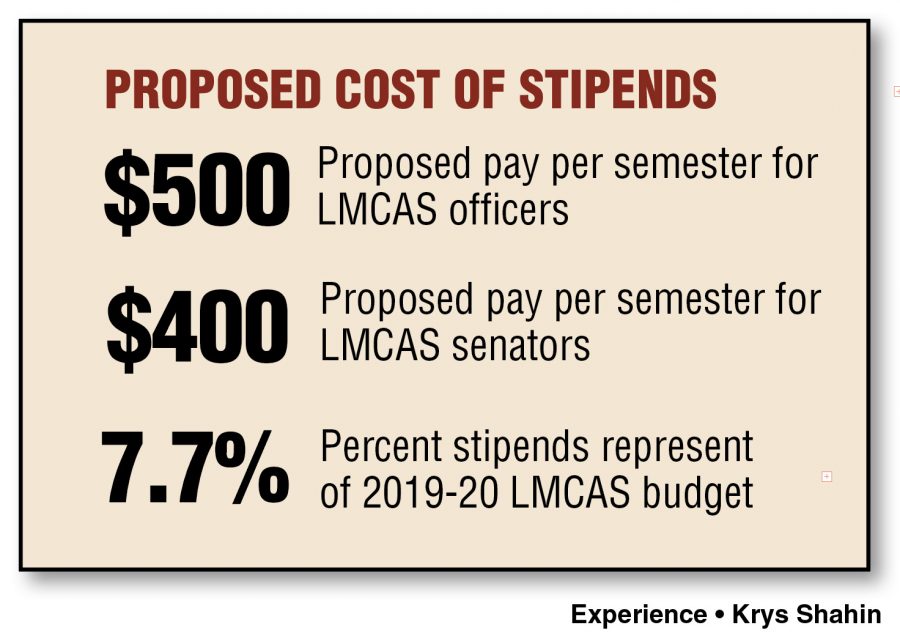 Los Medanos College Associated Students recently voted down a proposal to pay themselves stipends for their student government service after being criticized for not putting the specific topic on their meeting agenda as called for by California’s Ralph M. Brown Act.

Over the past few weeks, starting at the student government meeting Oct. 21, there were discussions about paying LMCAS officers and senators stipends, a fixed sum or an allowance that would have totaled nearly $20,000 of the $220,000 budget.

“I proposed going into 2020 spring and going forward to fund the stipends,” said LMCAS treasurer Felero Smith. “The reason to fund the stipends was to provide an incentive for LMCAS students dedicating so much time on campus towards meetings and committees to volunteering and events which can easily be an extra four to eight hours a week.”

LMCAS Senator Rochelle said, “stipends are a good incentive for students to join because mere marketing has seemed to fail.”

Los Medanos College has multiple governmental groups and committees subjected to California’s open meetings law and LMCAS is one of them.

The Brown Act was created in 1953 to protect the public and allow them the right to attend and provide public comment in meetings run by legislative bodies who use the public’s tax dollars.

The spirit of the Brown Act is to ensure transparency between constituents and representatives, to give everyone a chance to express their views regardless of the topic and its potential controversy.

“Pay for the student union is the exact thing, it is the core of what the Brown Act envisions,” said David Snyder, executive director of the First Amendment Coalition.

While most members of LMC’s student government initially supported the stipends, Vice President Shagoofa Khan was opposed to the idea.

She voiced her opinion alongside former student government members during public comments.

“Everything we use should go to the students,” said Khan.

The discussion about these stipends was labeled as “budget approval” on the agenda, rather than identifying the stipends specifically.

While this is technically in accordance with the Brown Act, it “certainly violates the spirit of the Brown Act,” said Mike Hiestand, senior legal counsel at the Student Press Law Center.

Former LMCAS members heard through current members about the vote on stipends and arrived at the meeting Oct. 28 to share their opinions during public comment as well.

“When I pay the $5 fee, I expect that money to return and benefit the students. You should be doing this out of your own volunteering,” said former LMCAS president Dale Satre, addressing the current members Oct. 28.

Jocelyn Vaillalobos, a former student trustee representing the Contra Costa Community College District, agreed with Satre but had a much harsher opinion.

Others disagreed with the public comments but did not reply in that moment.

“I don’t think it is unethical or selfish to want a stipend, especially if it isn’t much at all compared to how many hours have to be met,” said Arnold.

If the vote had been approved by LMCAS, they would have been allotting “$8,500 for a semester of a full cabinet, and then $17,000 for a year with full cabinet” from the budget, said adviser Dave Belman, dean of Student Success.

A full cabinet includes five officers and 15 senators, and LMCAS had proposed officers would be paid $500 per semester, and senators $400 if the vote had passed.

Though the stipends were voted down by the group, LMCAS President Thyra Cobbs said that “they only voted it down because the older senators came in and shamed them.”

The Brown Act is taught to the members of LMCAS throughout the semester and the “adviser normally does trainings once the board has confirmation of senators,” said Teresea Archaga, director of Student Life and adviser to LMCAS.

The money that would have gone to paying the students was then diverted to the student government advertising funds and the Zero Textbook Cost program.

“I am definitely satisfied that the stipends were redirected to to the student events and Zero Textbook Cost funds,” said Satre. “LMCAS is a volunteer organization for students to help other students, and it should remain that way. I’m happy that money will return to benefit the students.”