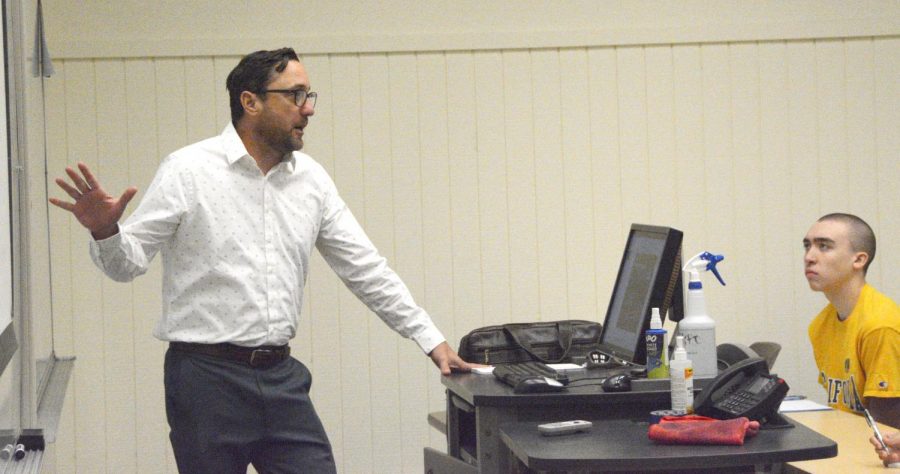 Los Medanos College is a cross section of the larger community, and the current political climate is having an impact on campus.

While there is a difference of opinion on whether the onslaught of breaking news results in more or less engagement, many students and teachers find themselves talking about current events in classes ranging from speech and communication to history and political science.

“Politics have become, to me, more of a prominent thing with Donald Trump as president and everything. I think it’s a good thing politics are being talked about in class because more people should be aware of what’s going on in the country they’re living in,” said student Javier Briseno, who is currently taking Speech 120: Argumentation and Debate.

Instructors who teach topics associated with politics in some fashion also think students should be aware and engaged.

“I include current events into the curriculum because it’s important for students to have an understanding of what is going on around them, locally, nationally, and internationally, so that they can make informed decisions about how they’re going to live their lives,” said Argumentation and Debate instructor Zach Feere.

“I discuss issues such as the abysmally low turnout rates often seen in local elections, and as a consequence, the potential for even a small number of votes to sway the outcome of a race,” he added. “My hope is that these types of talks will encourage students to become more interested in politics.”

Some instructors believe that American citizens have a duty to vote and ensure democracy works as the founding fathers intended. But, “lots of students don’t know that history,” said History professor Josh Bearden, who added that he sometimes also includes issues involving “immigration which comes in waves and cycles.”

Bearden said he mentions Trump’s anti-immigration rhetoric because, “it provides students with context to understand history.”

He also acknowledged that politics and social issues can sometimes create tensions which is one reason some “teachers seem to be hesitant to jump into controversial material.”

But for others, it is an essential part of what they teach.

“My job is to make students know how the government works,” said political science instructor Ryan Hiscocks. “I would feel remiss in my duties if I didn’t.”

Political Science colleague Milton Clarke acknowledged that it is important to talk about current political events but added that it takes time out of other key course topics.

“With a class like this, we are forced to deal with the fundamentals according to our course outline,” he said. “I feel like I had to talk about the impeachment… The problem is that there’s always going to be something timely to talk about.”

Feere said the Trump administration is certainly drawing the attention of the public. While he acknowledged “the reasons and motivations for that attention, of course, vary widely from person to person,” those differences make for rich debate.

Although Argumentation and Debate student Denisse Soria admitted, “I personally don’t like politics at all,” she agrees with classmate Briseno about the need to engage with the topic.

“I do think it’s important to talk about in class because we have to know about it,” she said.

Additionally, Bearden emphasized another important reason to include current events in the classroom: “Students see themselves in the material we are studying.”