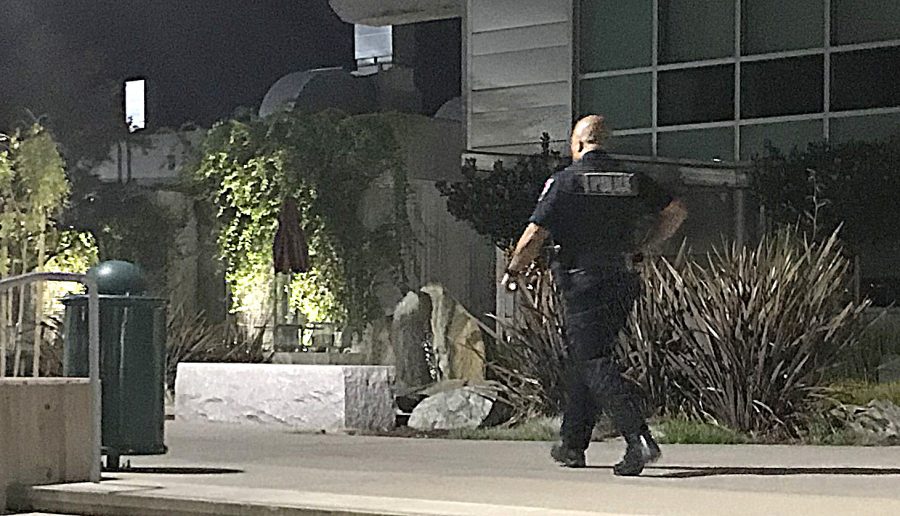 A police officer ready to draw his side arm walks into the College Complex in response to the incident.

Students and staff at the Los Medanos College campus in Pittsburg went on lockdown due to threat of a potential active shooter on campus, Wed. Oct. 9th at 9:43 p.m.

After receiving various calls about the rumor of an active shooter on campus, Officer Carney and Lieutenant Wehrmeister decided to send out a message through regroup and issue a lockdown at LMC until the area was cleared.

“I received a phone call from Lieutenant Wehrmeister at exactly 9:28 asking for a public regroup text for shelter in place or lockdown to be sent out. I should mention at the time there was no indication of any type of criminal activity,” said Carney.

At approximately 9:35 p.m., a message about a shelter in place was initiated within the police communication system. The message was sent out to the public at 9:43 p.m. after Carney approved it, informing students that police were searching the area and there were no indication of shots fired.

Even prior to the official order to shelter in place, the Pittsburg Police Department had six armed officers on campus searching the area for any potential threats.

“The Pittsburg Police were on campus when I got the phone call at 9:28. They were on location within several minutes, around 9:25,” said Carney.

At 11:57 p.m. on the night of the lockdown, Jennifer Adams, Senior Executive to the President of LMC, sent out a Press Release summarizing the nature of the situation. Although Adams was not on campus at the time of the event, she received a call from President Bob Kratochvil explaining what he had heard.

“I was at home. Bob contacted me for the Press Release and I believe that one of the officers contacted Bob and brought him up to speed on what was happening on campus,” said Adams.

While President Kratochvil was not on campus at the time of the shelter in place, he immediately contacted the chancellor’s office and Adams once he became aware of the situation on campus.

“Chief Carney gave me a call and told me what report had been given to them. I then called the chancellor’s office to let the board members know. I contacted Jennifer and drafted a correspondence to be put in the Press Release,” said LMC President Bob Kratochvil.

Fortunately LMC Police Services, Contra Costa Community College District Police Department and the Pittsburg Police Department have all confirmed that the potential of an active shooter on campus was a false rumor, as stated in the Press Release.

“Even though we didn’t hear shots fired, it was imperative that we still conducted a safety search of the entire campus,” said Lieutenant Chad Wehrmeister of the CCCCD Police Department. “We have only determined that the perpetrator was an unidentified male. The situation is still under investigation.”

Students and staff have expressed their gratitude for the open public communication by police at the time of the incident.

“I appreciate getting the notice about what happened last Wednesday,” said Julie O’Brien, Nursing Program Professor and founder of the Mass Casualty Training Program at LMC.

While some students appreciate the messages that were sent out, others had hoped for more information about the event at the time of its occurrence.

“It was truly an eye opening event for everyone and hopefully a wake call to our officials to speak up about this crucial incident even if nothing happened,” said student Esperanza Rojas, founder of Active Shooter Awareness Week. “I had hoped for the campus police or at least the president of the school to have made a statement about it.”

Although the event is still under investigation, Campus Police Services and the CCCCDPD are working to find out more information about the unidentified perpetrator and situation as a whole.