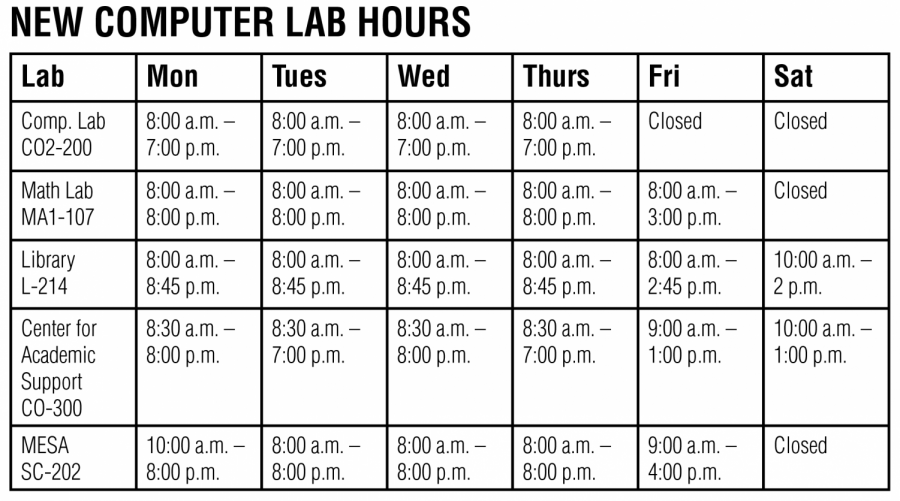 Graph made by Krys Shahin

Edit: The original graph depicted incorrect lab hours but was taken down and replaced with a graph displaying the correct information.

After concerns were raised following the surprise reduction this fall in hours for the Computer and Business lab in CO2-200 a compromise has been reached to trim the reduction from 28 hours a week to just 11. The lab, which at the start of the fall semester was open only from 8 a.m. to 3 p.m. will now open from 8 a.m. to 7 p.m.

“We were able to negotiate funding,” for the hourly position, said Vice President Sally Montemayor Lenz.

In addition, software that had only been available in that lab will be installed in other labs on campus so students will have access to programs that they need in the evening.

“In essence, based on a more comprehensive review of the Computer Lab location, hours, and services, effective Monday, Oct. 7, the Computer Lab CO2-200 will remain open until 7 p.m. to allow our students access to computers to support and meet their educational needs,” said Montemayor Lenz.

The original decision to cut the Computer Lab hours by nearly 50 percent, from 55 hours to just 28, was made based on data from the spring 2019 semester.

“There were decisions based on assumptions… We found through many sources that students aren’t required to log in when they come into the lab… The data doesn’t show its used. It inferred that students were going in there just to print things,” said Montemayor Lenz.  “Upon further review, there were unmet student needs and that is our number one priority.”

This cut in hours this fall came with outcries of concern for students with night classes who may not have access to wifi or computers at home.

“From a student perspective, I think it’s unfair and a disadvantage,” said Thyra Cobbs, president of LMC Associated Students. “There are students that don’t have computers or wifi at home, have night classes from 6:40-9:50… I have actually already heard students say that they’ve been affected by the lab cut.”

Faculty have also been concerned about how students will get work done without the resources needed to do so.

“Using your phone to write a research paper makes a complicated task even more difficult.  That’s why we strongly encourage students to use the labs on campus. Students need to be able to do their work in multiple locations and different times of the day,” said Brentwood Librarian Roseann Erwin.

Sixteen of the 27 hours originally cut this fall will not be added back into the computer and business lab schedule starting next week.

“We owe a special thanks to the staff and faculty for bringing it up,” said Montemayor Lenz, who added that the data did not support keeping the lab open until 8:45 p.m.

But to accomodate students with business and computer science classes, who need evening access, computers in the Library, Room L-214 as well as in the MESA lab, SC-202 will have the software needed for both classes.

“Ultimately, the computers in the lab were bought for the use of the students,” said Erwin.