Vets stand down to get up 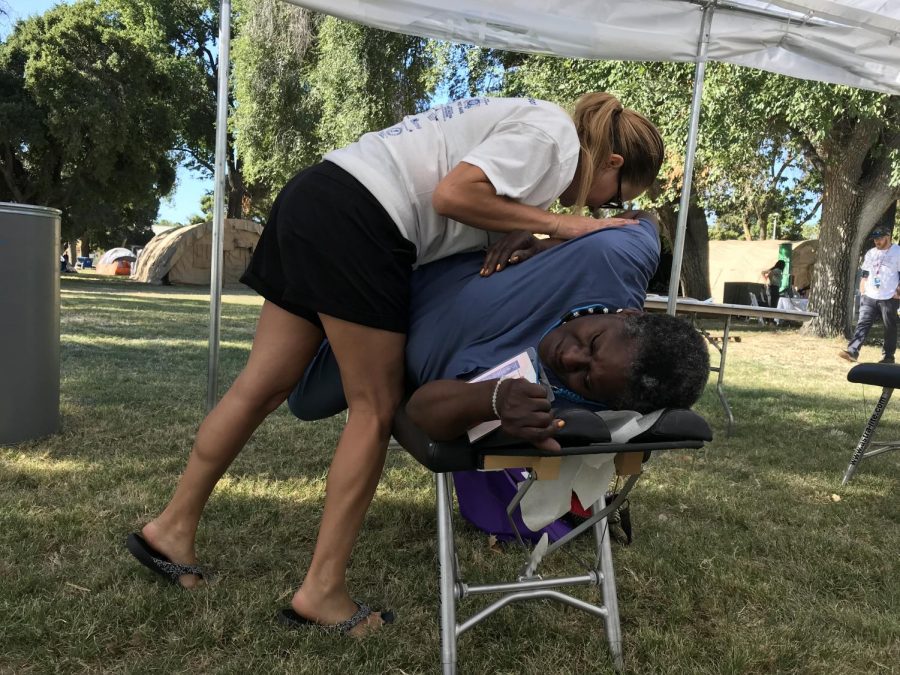 “Reveille,” hailing from the French word for “wake up,” is a customary wake-up call used to alert military service members at sunrise. “Waking up” is exactly what happened for more than 300 homeless and at-risk veterans at Stand Down on the Delta from Sept. 20-23.

As mentioned in their event program, Stand Down on the Delta is a bi-annual, four-day encampment for homeless and/or at-risk veterans to come together and receive support from their communities. While at Stand Down, veterans are provided with court and legal services, DMV, addiction counseling, clothing, food, shelter, hygiene services, wellness, medical and dental services and a number of other community services.

The event was put on by Delta Veterans Group, a veterans’ nonprofit based in Contra Costa County dedicated to bringing housing, employment, health and education to veterans in surrounding Northern California areas.

DVG’s president, J.R. Wilson, who was homeless himself in the city of Antioch as a teenager, founded DVG after returning home from years of military service to find an increase in homelessness among veterans in the East County.

The struggles of veterans reintegrating into society are often intensified by a lack of social support networks, which Stand Down on the Delta aims to provide.

“It’s a good reminder that you’re not alone. You can forget that and feel like you’re messing up, so it can be incredibly empowering, and build a sense of community and camaraderie,” said Ryan Rector, U.S. Marine veteran, Vice President of the Student Veterans Alliance of Diablo Valley College.

It is through this sense of community and care that many participants are able to get back on their feet.

Alfonso first joined Stand Down on the Delta’s debut in 2015. Alfonso, who had been homeless for eight years and had been a victim of crime, turned his life around with the help of Stand Down and was able to return to school to become a paralegal. “This institution definitely cares about its people, and because of that care, I didn’t commit suicide four years ago.”

Alfonso now attends Stand Down on the Delta as a volunteer and practices as a certified paralegal.

One of Stand Down at the Delta’s most impactful components is its medical, dental and eye services. Services included medical VA eligibility and enrollment, health screenings, emergency services, vaccinations, mental health and wellness, chiropractics, prescription glasses, teeth cleaning and more.

Medical services were made possible in large part by the U.S. Department of Veteran Affairs, as well as by organizations like Walgreens and nursing students from California State University, East Bay.

Medical services were not exclusive to the participants; pets were offered benefits, too. Through the Contra Costa County Animal Response Team, veterans’ animals were provided a place to stay for the duration of the event, with 24-hour service offering general veterinary checkups, vaccinations, microchipping and vouchers for animals to be spayed or neutered.

LMC faculty member Diane Ferguson, who serves on the executive board of DVG, commented on the usefulness of Stand Down to student veterans, “Many of us can be just a paycheck away from not being able to provide basic needs. Many student veterans find themselves in… such a situation.”

The LMC Veterans Club also co-sponsors a softball tournament with DVG each Memorial Day to bring awareness to Stand Down on the Delta.

The event was made possible by more than 1,000 volunteers, some of whom were either students or faculty of Los Medanos College.

80 different organizations also came together to make this year’s Stand Down on the Delta possible. Sponsors included Chevron, Antioch VFW and Auxiliary Post 6435, the LMC Veterans’ Club and more, as well as multiple individual donors.

To get in touch with DVG, visit deltaveteransgroup.org.