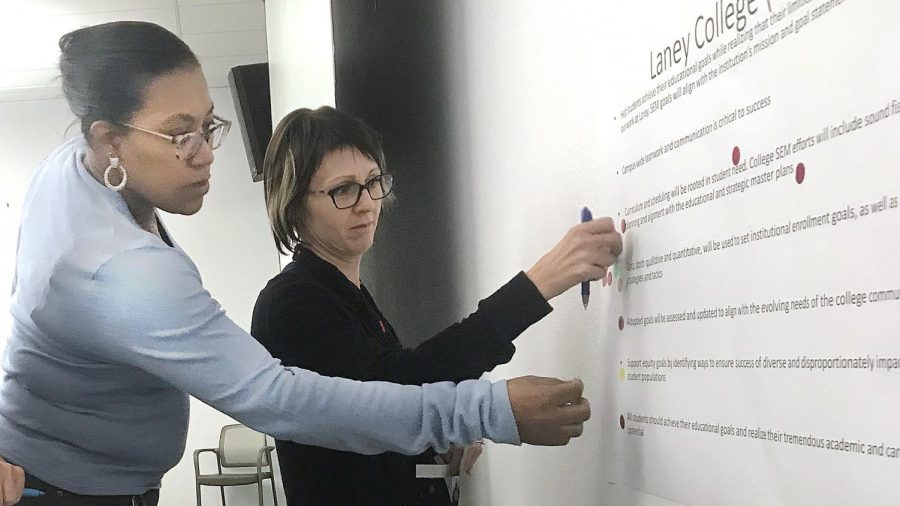 Letta Greene and Jill Bouchard place dots on a board Sept. 16.

Los Medanos College staff have been working hard to make a new system on campus that allows professors to focus on putting the students and their experience first while on campus.

This plan is called Strategic Enrollment Management (SEM) and it focuses on three base pillars: student experience, institutional organization and fiscal responsibility.

SEM is now a committee-like group of staff defining what LMC has called “guided pathways.” Staff are strongly encouraged to go to these weekly meetings by the president, vice president and other committee heads.

“We have to pause on what we’re doing to reflect on the student experience,” said Vice President Sally Montemayor Lenz.

At first, guided pathways and SEM were seemingly separate but during the first college assembly of the academic year, Monday Sept. 16, Academic Senate president Josh Bearden announced that they are one in the same.

“SEM is how guided pathways is institutionalized for the future,” said Bearden.

There was once a committee that mandated topics of this nature, but the last time they met was said to be in 2012.

The largest target this group seems to want to hit is that they want to ensure their policies and practices do not deter students from attending LMC.

“I have confidence in the people running it to build something that will help students,” said philosophy professor Edward Haven.

The biggest hurdles and questions that the staff at LMC have been dealing with are about overview. The concerns are mostly with student experience, but also people asking questions about both what the campus’ environmental and technological needs are.

There is an obvious difference in size between students and the classes offered at LMC, not all classes will have the same amount of enrollments as the next.

“Do not sacrifice reputation for quantity,” said Dr. Craig Justice, the advisor to LMC on their journey to adopting guided pathways into their near future.

With these changes looking to take place in the coming years, LMC is planning this while dealing with a potential $11.5 million budget cut due to a lower number of Full Time Equivalent Students, which is simply one student per every 12 units.