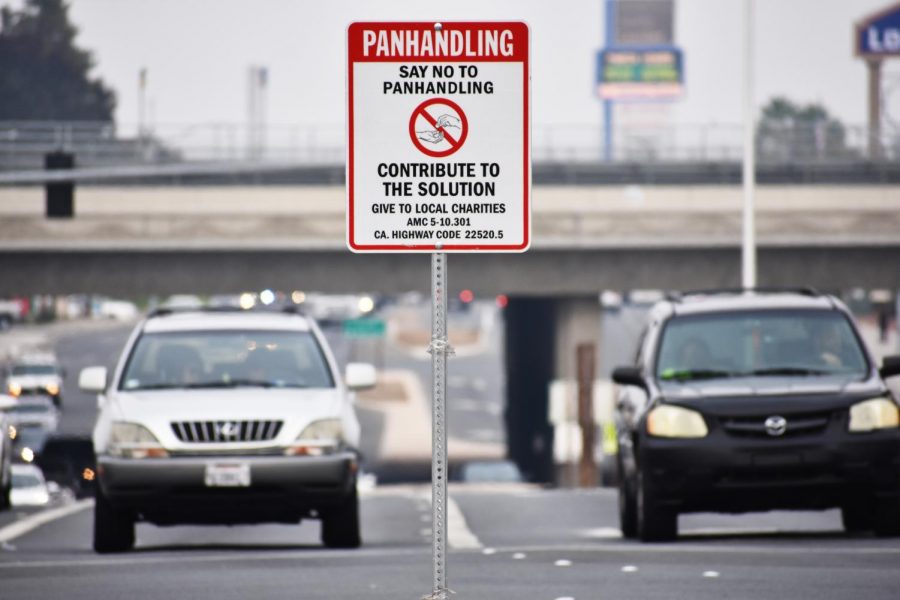 Everyone has seen the road signs around Contra Costa County urging drivers to “say no to panhandling” and “contribute to the solution” by donating to local charities. Several new signs have popped up in Antioch in the last few months on and around Somersville Road in particular.

However, the placing of the signs most likely had little to do with Somersville Road specifically or uniquely.

The signs all mention California Highway Code 22520.5, which makes it against the law to “solicit, display, sell, offer for sale, or otherwise vend or attempt to vend any merchandise or service” anywhere near a freeway. Somersville Road and Auto Center Drive, which Somersville Road leads into and also received an anti-panhandling sign recently, contain several onramps for California Delta Highway 4 and thus are no-solicitation zones under the Highway Code and are subject to signage.

Specifically, the Code states that the solicitation is not allowed within any of the following, with some minor exceptions:

“I’m not sure about the signs… I’m unaware either way if they are effective,” said Lieutenant Chad Wehrmeister about the anti-panhandling signs in the local area.

Wehrmeister stated he could not recall any incidents of panhandling on Los Medanos College’s campus that Police Services has had to deal with. The Antioch Police Department could not be reached for comment at time of publication.

Regardless of the sign’s efficacy, not all in the area agree with their construction. Antioch citizen Maria Valle stated that she feels it is “not right” for the state to have laws against panhandling, and that it should be up to “individual decision” whether they want to give money to beggars, and not for the state to ban panhandling outright. She even stated she would like to see a petition to have the signs removed or the law overturned.

“Everybody needs an opportunity to make money,” said Valle.

Panhandling continues to be a charged issue for many; in a press release last September, the nearby Pittsburg Police Department called panhandling “a huge societal concern for many communities, representing a visible indicator of blight” and stated that they are “committed to providing an environment in which residents, merchants, and visitors to the City are not accosted by panhandlers.”

On the other hand, the American Civil Liberties Union has made several statements this year claiming that anti-panhandling ordinances in Iowa requiring a permit to panhandle are “unconstitutional” and a “block” to freedom of speech.

However, back in California, Highway Code 22520.5 still states soliciting near a highway is illegal, and signs like those on Somersville will likely stay standing.