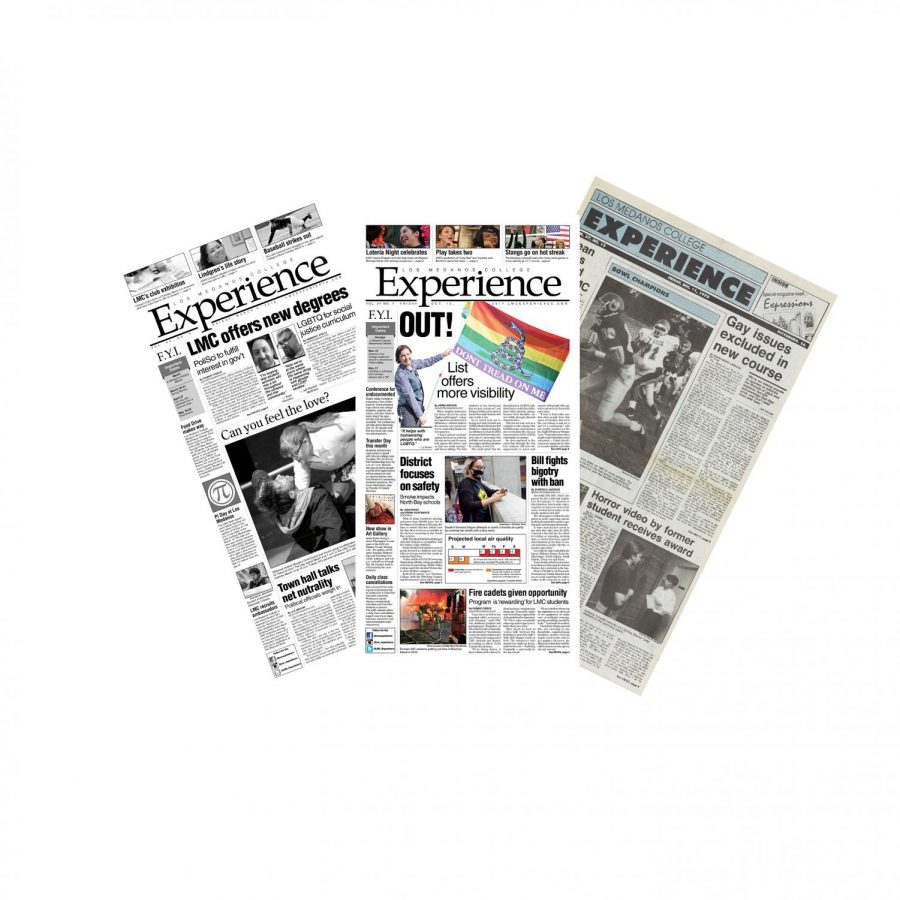 From left to right, the newest LMC Experience issue covering LGBTQ+ problems to the oldest issue.

English instructor Jeff Mitchell-Matthews has collected much during his time at Los Medanos College — over 25 years of teaching experience, countless memories, at least one egg to the face and a 28-piece collection of issues of The Experience mentioning or concerning the LGBTQ+ community.

The oldest issue in his collection was printed during his first semester at the college, Dec. 11, 1992. The right third of the front page declares “Gay issues excluded in new course” in regards to a new “ethnic/multicultural study” program highlighting diverse issues but not those of sexuality or gender.

Just underneath the headline is a quote from Mitchell-Matthews himself; “We’re not asking anyone to approve or endorse the lifestyle of the gays and lesbians, but just acknowledge that they exist, and don’t treat them with hate.”

In the months following his arrival, the pages of The Experience became a lightning rod for discussions about LGBTQ+ issues and Mitchell-Matthews himself was a spitfire.

“Until I arrived here, there was never really anyone speaking up… [on] LGBTQ issues,” Mitchell-Matthews explained. “There was no loudmouth, so to speak.”

Shout at the cave, however, and it will echo back.

“Homosexuality is wrong,” penned Experience staff member Erica Brooks Sept. 3, 1993 in a column titled “No apology for philosophy” with the sig line of “To Tell the Truth.”

Two weeks later, an entire third of the Perspectives page was dedicated to responses to Brooks’s column.

“I am not gay but my brother is, and he recently was critically injured by a blow to the head from a gay-hater,” said Trevor Marklin. “I believe your paper was irresponsible for publishing the editorial by Erica Brooks.”

“The article was very good and I would like to encourage her to ‘Tell the Truth,’” wrote Art Mijares.

“Ms. Brooks, you wouldn’t recognize the truth if it painted a swastika on your door!” exclaimed a response written by Mitchell-Matthews and signed Gay, Lesbian and Bisexual Alliance. “We will never go back in the closet, nor will your kind ever succeed in getting rid of us. We’re here. We’re queer. Get used to it.”

This lead to a chain of responses published in the weeks and months following. Most of them sided with Brooks and one attacked The Experience for publishing a column anonymously. Another by Bob Huff called for a return to “Bible-based law.”

“All of the arguments [were] religion-based,” reflected Mitchell-Matthews. “It became less about gay people and more about religion bashing gay people.”

Mitchell-Matthews, also the founder of LMC Freethinkers, described his letters to the editor as “fighting fire with fire” and having “broke the mold” by criticizing religion on campus.

“I’m sort of laughing at myself because I was very in-your-face,” he said. “My colleagues told me again and again that no one had ever really done that before.”

The same semester, Christine S. Y. Cordova wrote a two-and-a-half page “Look at both sides of the sexuality issue” titled “When Following Your Heart Sets You Apart” for Expressions, a magazine insert The Experience formerly published. Mitchell-Matthews is pictured alongside the article with his partner Chris, who he would later marry after Obergefell v. Hodges gave same-sex couples freedom to marry in 2015.

Over the years, The Experience continued to discuss LGBTQ+ issues in print when relevant; vandalization of posters and displays belonging to the Alliance were a recurring showcase, as were Mitchell-Matthews’s lengthy letters to the editor.

“From the beginning, The Experience has always been very open,” said Mitchell-Matthews. “When I felt like there was a message I wanted to send to the campus… my go-to would be the paper… I think they only turned me down once or twice.”

Mitchell-Matthews also stated he does not hold the publishing of anti-gay columns against The Experience, claiming it was “appropriate” to allow even controversial opinions to be printed.

“Certainly, the paper has never done anything intentionally anti-gay,” he stated.

Oct. 16, 1998 — the Voices question for the week is “How would you react if you were hit on by someone with a different sexual preference?”

“I wouldn’t dig it at all,” responded student Shay Shields.

The Oct. 16 issue was printed four days after gay teenager Matthew Shepard was tortured and killed. One alleged motive for the murder was his killers thought he was flirting with them and reacted violently.

“Asking this question in the aftermath of the brutal murder of Matthew Shepard was perhaps not the most sensitive or constructive way you could have addressed the very important issue,” Mitchell-Matthews wrote in a letter to the editor published the following week.

His letter set off another flurry responses and a discussion that continued into the spring of 1999.

“Once we got into the aughts, things kind of got quiet,” Mitchell-Matthews stated.

Propositions 8 and 22 brought in swarms of letters and columns, but Mitchell-Matthews’ collection is comparatively thin during this period. The Experience still ran story coverage, but gone were the days of poster graffiti citing Bible verses and semester-long argument chains in the Perspectives pages. Mitchell-Matthews attributes this to society becoming generally less religious and more tolerant, remarking he “hardly” encounters religious homophobia in his daily life anymore.

“Our campus is a small reflection of society as a whole,” he said. “We went from being… an anti-gay culture… to at least being a neutral gay culture.”

The two final issues in the collection are from Oct. 13, 2017 and March 9, 2018. The front pages stories for each issue are the creation of the Out List, accompanied by a full-color photograph of Professor Liz Green bearing a rainbow flag and the creation of two new humanities degrees, including one for LGBTQ Studies.

“Mitchell-Matthews… plans to be even further involved in implementing these new courses,” wrote Kimberly Stelly.

That was seven months ago — Mitchell-Matthews is currently planning to retire at the end of the academic year, but is confident the LGBTQ+ community at LMC will continue prosper after he leaves and hopes to see the creation of a concrete gathering area for the community in the near future.

For now, says a jovial Mitchell-Matthews, it’s time for him to “let some other people do all the gay stuff.”