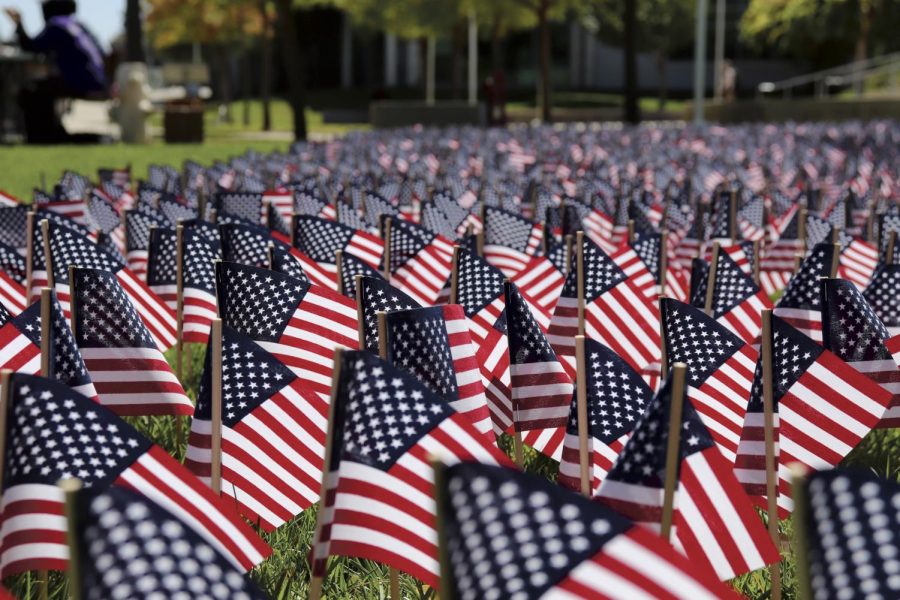 The new Young Americans for Freedom club at Los Medanos College held a 9/11 memorial event on the anniversary of the attacks, placing 2,977 miniature American flags on a patch of grass in the main quad near the library and holding a panel from 11 a.m. to 2 p.m. to answer any questions student had about the display. However, their memorial, which was created by their parent organization the Young Americas Foundation and performed at over 200 schools according to YAF Chairman Jessica Anderson, drew controversy due to posters used to promote it, also created by the parent organization.

The memorial itself, the first 9/11 memorial held by the college in several years and officially titled the “9/11 Never Forget Project,” was set up by YAF club members Monday afternoon after receiving clearance and support from the Office of Student Life, LMC President Bob Kratochvil, Police Services and groundskeeping. The Office of Student Life paid for the flags used in the memorial, which was designed to remind people of the impact of the original attacks.

“I would say it went fairly well because we had a lot of people stop by, and a lot of people took pictures,” said Joseph Tompkinson, Vice Chairman of Young Americans for Freedom. “You had people who stopped and looked like they were taking a moment of reflection because… when you really stop and look and realize, ‘Holy moly, that’s a lot of people,’ then that’s kind of when it hits you, and I think that’s what we were going for.”

Anderson hoped the memorial would allow memories of the victims to stay alive in the minds of younger generations who did not directly witness the attacks, and noted many older people on campus expressed positive sentiments about the memorial.

While the memorial was generally seen as being tasteful and powerful, some students and faculty took issue with the campaign poster which depicted not only 9/11 but also seven other terror attacks from Islamic extremist groups on predominantly American victims.

“The event was good, but the advertising was deceiving… when you celebrate Native American day, you’re not saying ‘Look what all these Europeans did,’” said LMC student Ricardo Black. “My question to the club would be… what were you trying to make people feel when they saw that?”

“It didn’t make sense to me,” LMC student Natalie Yoshimoto said. “It made me not want to go… it didn’t make it feel like a safe event.”

An unnamed classified staff member was seen taking down several copies of the poster lacking the Office of Student Life stamp of approval the day after the memorial, remarking she saw several Muslim students in the ESL office in tears and stating she felt a copy of the poster posted nearby was “targeted.”

Nwokochah, who is affiliated with the Office of Student Life, stated that those posters were authorized to be placed there, but that some were accidentally left unstamped.

“I can understand where her concerns may come from,” Anderson said in response to the claims of targeting. “[But] we have no control of where they go up… I would not have put it there personally.”

Anderson also mentioned the club originally had the poster submitted and approved Tuesday of the week they were posted, and was told on Thursday that they were too big despite finding in the Office of Student Life handbook that there is no explicitly stated maximum size, and presented the issue to campus administration before they were eventually put up.

“I firmly believe that they were using ‘it’s too big’ as an excuse because they disagreed with the content,” Anderson stated.

The Office of Student Life is not allowed to prevent a student from engaging in expression based on content unless it is deemed to be obscene, libelous, slanderous or inciteful.

“Typically the Student Life Office attempts to post materials within one day. However, occasionally it can take longer,” Director of Student Life Teresea Archaga stated on the subject. “When YAF submitted the posters for posting, initially Student Life was unsure how to handle them due to the size being larger than many bulletin boards can accommodate. Due to this need to identify places that could accommodate the size of the posters, it contributed to a slight delay in posting.”

Young Americans for Freedom maintained both the poster and flag display were “just for awareness” about 9/11, stating many students who passed by the panel the day of remarked they originally forgot about it.

“Sometimes you have to use a shock factor to catch someone’s attention,” Tompkinson stated. “These posters were designed to catch your attention by saying, ‘hey, look at these horrible things that happened’… Nowhere on there was there placing blame on any specific group of people or… saying these people are terrible. It was saying that terrorism is terrible and that we do not forget those who lost their lives to these terrorists.”