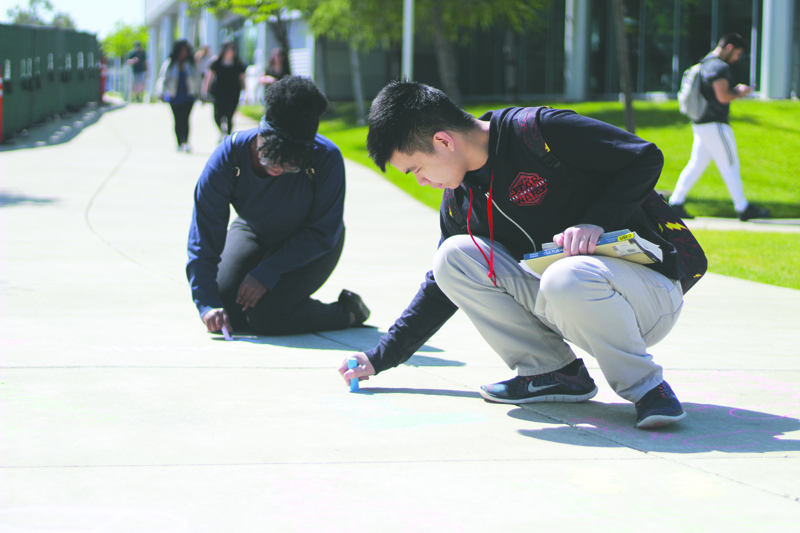 The typically gray sidewalks in the Los Medanos College student quad were electrified by colorful chalk messages about fighting against sexual violence Wednesday, April 25 from 9 a.m. to 2 p.m.

With an informational table, a bucket of multicolored chalk and a group of students who were passionate about the cause, LMC students and faculty joined in on the chalk fun to leave their positive messages regarding sexual violence.

“People are spreading awareness,” said LMC student William Ta as he wrote his message on the ground. “I’m happy to see that.”

Inspiring people to spread awareness and acting as the catalyst for this event was student Jocelyn Villalobos, who thought writing chalk messages would encourage the LMC community to discuss sexual assault.

“I was trying to find an easy way to get students involved,” explained Villalobos.

Like many, not only across the campus but nationwide, Villalobos knows people who are sexual assault survivors and much like the #MeToo movement, she wanted to give those people a voice.

“My own family members and friends were silent about [sexual assault] for years,” said Villalobos. “It’s really sad that they stayed silent.”

One of Villalobos’ friends who helped to rally students into writing their chalk messages was Pricilla Tatmon, who too feels equally passionate.

“It’s really exciting because normally people don’t talk about this,” said Tatmon, adding that she appreciated the people who put in their time to write a message with chalk.

Those who wrote with chalk were also encouraged to take photos and share their positive messages online while tagging ‘@lmcstudentlife.’

Also a part of the group who ran the chalk walk was student Erika Ramos, and after seeing the effort Villalobos put into starting the event and the students who had come out to participate in it, she felt really happy with the outcome.