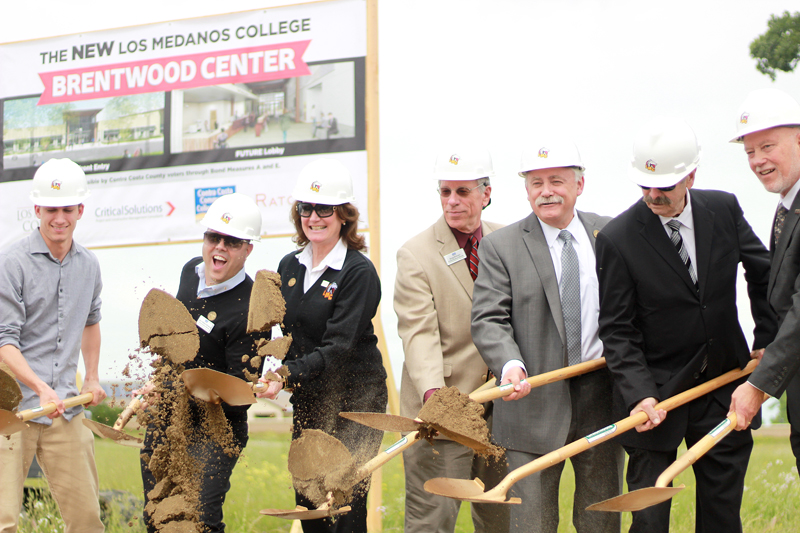 “Today is a pivotal moment in time,” said Gary Walker-Roberts as he looked out over a large crowd that had congregated in the middle of a grassy field, soon to be occupied by the new Los Medanos College Brentwood campus. “This college campus will change lives forever.”

Like Roberts, who acts as the Contra Costa Community College District Governing Board Vice President, people have also been anticipating the new satellite campus. Their dreams finally came to fruition when shovels were pushed into the ground at the Groundbreaking Ceremony April 18 at 1 p.m.

The ceremony kicked off with an opening speech by LMC President Bob Kratochvil, who announced he was excited to see the plot of vacant land “become the site of educational and career opportunities.”

CCCCD Governing Board President John Márquez followed Kratochvil with the same level of enthusiasm, also emphasizing that the crowd — made up of City of Brentwood officials, architects, Contra Costa Community College District members and multiple LMC staff members and students — was what “made all of this possible.”

After Márquez, Roberts took to the podium and presented his own personal story which explained why the campus meant so much to him. As a prior LMC student who had previously attended the original Brentwood campus, Roberts has been an advocate to remodel and create a refurbished satellite campus. Among those whom he mentioned that were equally excited, was LMC professor Laurie Huffman who had previously worked at the Brentwood campus and was hoping for improvements for the students.

“I am confident that the majority of our constituents… are just as thrilled,” said Roberts, adding that it is an exciting time for the future students due to the creation of a new campus.

This new campus will feature 15 classrooms, 700 parking spaces, food options and a relaxation area for students. Aside from its assets, CCCCD Chancellor Fred Wood also made comment to the location of the site.

“You couldn’t have found a more beautiful site,” Wood marveled as he gestured to the flower fields and large tree behind him. “It has all the pieces.”

Closing the speech portion of the event was LMC Associate Students President Marco McMullen who echoed similar excitement over the new satellite campus, adding he felt that the new campus demonstrated LMC’s dedication to students and that he feels “especially proud to be a Mustang.”

As the speakers left the podium the crowd’s attention was regained once more as the ceremonial groundbreaking commenced. CCCCD members, LMC staff and faculty, Brentwood residents and more took turns wearing hard hats and holding shovels — officially marking the beginning of the construction of the campus.