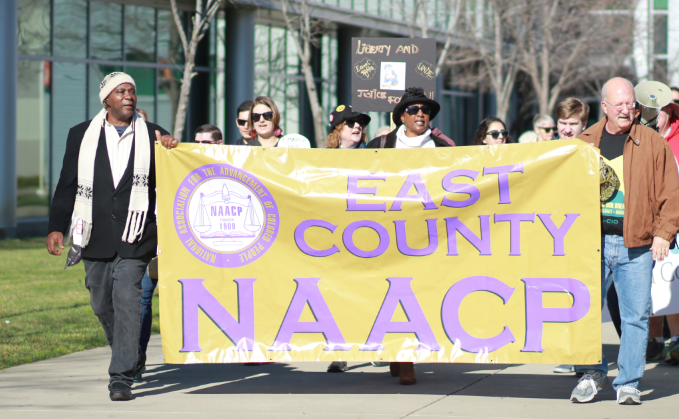 Typically, the parking lot at Somersville Towne Center in Antioch is packed with cars and mall-goers. But Saturday, Jan. 27, the parking lot was instead filled by a group of over 50 people who were protesting in the East County March for Equality and Unification.

Sponsored by the organizations Indivisible Contra Costa County, the East County branch of NAACP and Todos Unidos, the march had been in planning since Sept. 2017 and both ICCC and the participants were eager to begin the protest, but emphasized its peaceful manner.

“We want to make sure that we are orderly,” East County NAACP President Victoria Adams instructed the waiting crowd. “But at the same time, we want to let people know that we are here for unification and equality.”

Following some safety messages from Adams, participants enjoyed free coffee and music before embarking on their march from Somersville mall to Los Medanos College at 10:30 a.m.

With banners, signs and speakerphones, the group of protestors began their march to LMC while chanting “united we stand, divided we fall.”

Arriving at LMC at 11:00 a.m., the chanting vibrated off the buildings and illuminated the campus quad as the group came to the end of their march.

“We made it to the promise land,” exclaimed Harry Thurston, Chairperson of Indivisible East Contra Costa County.

The events of the march did not end at the LMC campus however, as East Bay community members such as representatives from the city council, the sponsored East County March groups and the Mayors of Pittsburg and Antioch presented speeches.

Among those giving a speech was Los Medanos student Lucas Stuart-Chilcote. After stating that he is both a person with disabilities and a member of the LGBTQ community, Stuart-Chilcote explained in his speech his belief that people in the local community need to come together to support those in minority groups.

“There is an issue with equality in the East County,” said Los Medanos student Lucas Stewart Chelcote. “It effects our community negatively… we need unity and equality for our home, East Contra Costa County, and we need it now.”

Another passionate individual to take the microphone was Arturo Fernandez. Student at UC Berkeley and a DREAMer, Fernandez explained how he previously worked on a sanctuary campaign in Pittsburg and he shared his beliefs on unity.

“I am undocumented and unafraid,” Fernandez yelled into the microphone. “In all of us we sense the injustice and feel the pain” so we need to “step up and be there for one another.”