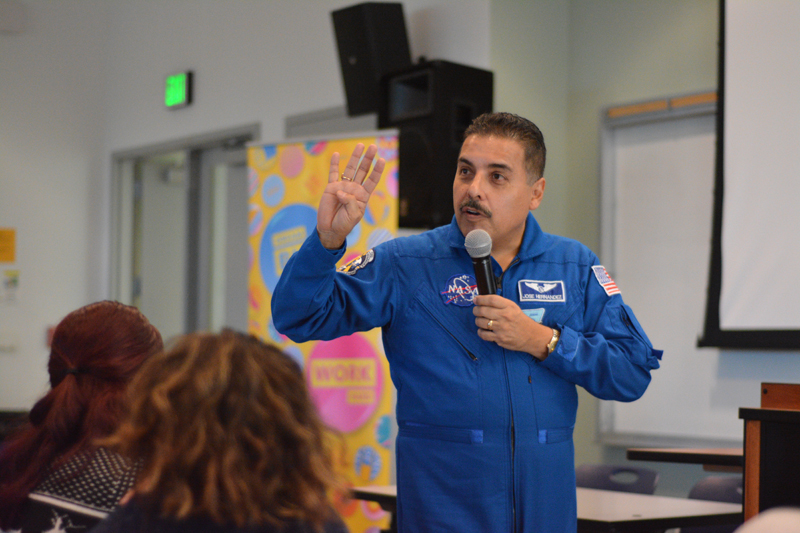 Hernández was born into a migrant farmworker family from Mexico, and described his childhood of hard work all weekend during school time and seven days a week during the summers.

He recounted watching the Apollo 17 mission in 1972 as a 10-year-old on a black-and-white television, “grabbing the antennas to increase the reception.”

‘Mesmerized’ by what he saw on the television, Hernández decided right then and there he wanted to be an astronaut, and “never looked back after that.”

At the tender age of 10, Hernández had a long road ahead of him to become an astronaut, but he was encouraged from the very beginning by his father, who pulled him aside the same night and told Hernández five steps to reach his goal: decide what you want to be in life, recognize how far you are, give yourself a road map, pursue education and put in effort.

“I would add one other ingredient to that recipe,” Hernández said after reciting his father’s recipe to his audience at LMC, “and that is perseverance.”

Perseverance was a key theme throughout the speech for Hernández, who was rejected by NASA 11 times before finally being assigned a role in a space mission as an astronaut.

“You can’t give up on yourselves,” he said. In addition to his father’s five-step recipe for lifelong success, Hernández told the audience of his personal three-stage plan to accomplish an individual goal — the first stage being to find out the minimum requirements.

Hernández did just that. After graduating high school in Stockton, he attended University of the Pacific in Stockton as an electrical engineering major.

“I was getting my butt kicked that first year,” Hernández stated in an interview. Describing himself as a “product of public education,” he explained that “it wasn’t easy” adapting to the private school environment, and holding down a full time job while doing, sometimes two or more jobs.

After years of hard work, Hernández eventually graduated with a 3.5 GPA and transferred to the University of California Santa Barbara for post-graduate education with a full-ride scholarship — work no longer needed.

Just going to school wasn’t enough, however, Hernández revealed during the speech.

“I got the first rejection letter, I expected it,” he stated. “But then I got the second, the third, the fourth, the fifth, the sixth… and I thought, wow, I must be doing something wrong.”

Hernández implemented the second stage of his plan, which is to compare oneself to “successful people” or the people who have already achieved your goal — see what they are doing, or did, that you are not, or have not. Hernández looked at successful NASA program applicants and noticed that everyone else was a pilot, so he became a pilot. When that still didn’t get him accepted, he looked again and saw everyone was scuba certified, so he himself got not only basic certification, but advanced and even rescue certification to be competitive.

But that still wasn’t enough – Hernández had to move on to the third stage of his plan, which is to rise to the top.

“Do things that distinguish you from the competition,” he urged.

While he was applying for over a decade, Hernández used his degree to start working at the Lawrence Livermore National Laboratory as a Scientist Engineer on their nuclear non-proliferation program. An opportunity came up to work in the newly formed at the time Russian Federation for five years as a nuclear scientist, and Hernández leapt at it, even taking classes on Russian language and culture to prepare, after hearing on National Public Radio that the United States and Russia would soon be collaborating on a space project that eventually became the International Space Station.

“It didn’t take a rocket scientist – even though I was one – [to see] that we were going to work with the Russians in space,” Hernández joked.

The unique experience gave him the edge to finally make it into NASA after nine applications – but out of 100 finalists, only 15 eventually become astronauts every year, and Hernández went through the finalist program three times before making it to the 15 – meaning it took him 12 applications overall.

“Part of the advice I want to give to kids,” Hernández stated during the same interview, “is when you pick a goal, make sure you enjoy the journey.” During the more-than-a-decade-long process of applying to become an astronaut, Hernández never stopped enjoying the ‘journey’, from becoming a certified scuba diver to moving to Russia for five years, and took great pride in his work at the laboratory.

“It wasn’t a bad consolation prize if I didn’t get selected,” he stated with a smile.

Retired from NASA, Hernández, when not making celebrity appearances like the one at LMC, works as the President and CEO of his own engineering LLC, Tierra Luna.

“Anything is possible in life if you put your mind and effort to it,” he encouraged. “Including reaching the stars, like I did.”