The impact of equity: Eight voices in first TEDx 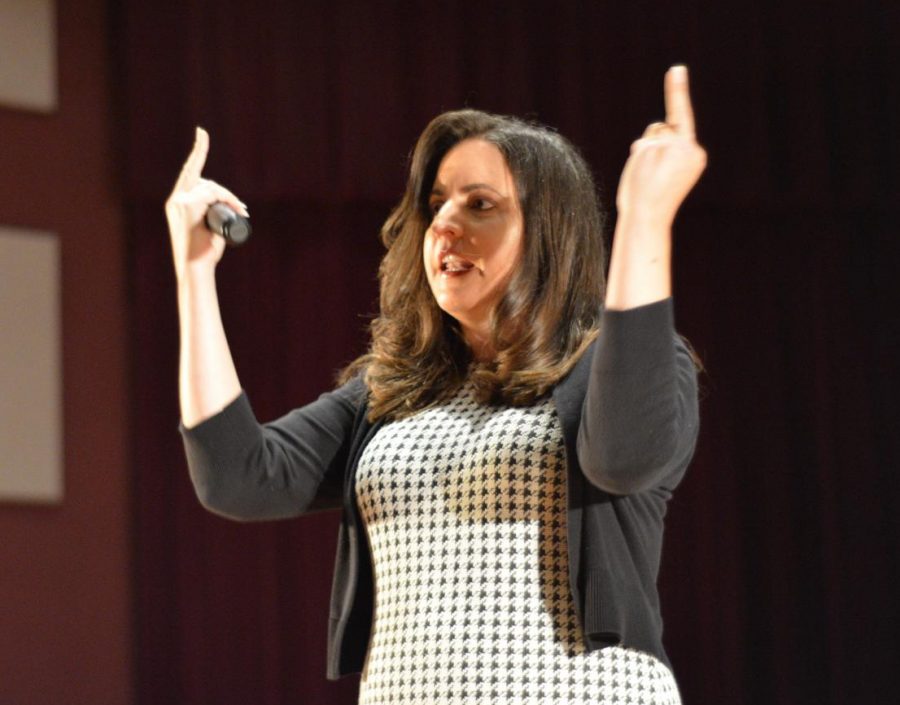 Nina G., one of eight speakers at TEDx, telling a story during her talk titled "Stutterer Interrupted" about the time someone made a disrespectful remark about her stutter and how she responded.

As students, faculty, staff, family and friends filed into the Recital Hall at Los Medanos College, a murmured excitement fluttered throughout the auditorium. Heat from camera lights beamed over the stage fully equipped with a podium, projector, red circular carpet and four big red blocks that announced the event of the night: “TEDx.”

A branch off from the influential media platform TED Talks, TEDx is a local and self-organized event that people from across the globe can participate in. Broadcasted live, this TEDx event is the first to ever occur in the district, and can pave the way for future TEDx events at the campus in the future.

TEDx co-coordinators Marie Arcidiacono and Laurie Huffman gave a heartwarming speech before the event about the excitement they felt over bringing the first ever TEDx not only to LMC, but also to the entire Contra Costa district.

“From the day I arrived on campus… I saw we were highly innovative,” mused Huffman. “Besides being No. 6 in the College Choice awards, Los Medanos College tonight is on the TEDx world map.”

“Those eight fell in our lap,” explained Huffman, adding, “What’s amazing about that is the diversity” that naturally occurred.

Commencing the evening with a speech about entrepreneurship, Nilton Serva explained that he used to live in the streets and often found himself getting into trouble. Due to this, Serva was incarcerated twice but instead of letting that defeat him, he spent his jail time reading and focusing on his personal development.

Growing up in the streets and getting incarcerated “preparing me for such a task that I thought was impossible,” said Serva. “Entrepreneurship was meant for me.”

Hannah Siddiqui was the next speaker and she discussed how her food allergies made her conscious of living a sustainable lifestyle.

“Growing up I ate pretty much everything without a care in the world,” recalled Siddiqui, later stating that since having food allergies she is not only cautious about what she puts in her body, but how it impacts the environment. “This is about more than just my health.”

Switching it up from environmental health to military strategies, intelligence analyst Dale Satre took the stage to bring light on foreign policy between the U.S. and China. Combining his interests in international relations with economics, Satre gave a constructed analysis of the possible future that the U.S. could face when China further expands their military.

“We have to realize that China is not invincible,” Satre emphasized. “The U.S. is still #1, but we have to be content with no longer being the sole super power in the world.”

After a short break between speeches, featuring a TEDx video and food and beverages for guests, the evening reconvened with LMC professor Daniel Beaver. With a lot of experience in the field of marriage and family counseling, Beaver talked about how the digital world invades inter-personal connections. “Everywhere you go, you see screens,” said Beaver, adding that this is the new normal – and that is the issue. “People are avoiding real contact,” Beaver continued. “We have a major disconnect.

Beaver wrapped up his TED talk by suggesting that people who suffer from a disconnect due to technology share their feelings and celebrate their emotions with their friends, family and partners.

The Latinx culture was discussed and celebrated by Hailey Solares’ in her TED talk about cultural acceptance in America. Passionate about international relations and a member of the Latinx community, Solares brought light to the many benefits that the Latinx culture brings to the U.S. including bettering the economy and making up a large portion of the work force.

Despite the benefits that the Latinx culture brings to America, “many still feel marginalized and looked down upon,” explained Solares, adding that it is important to accept all cultures and celebrate what they offer.

“Culture is so vital to our lives.”

While discussing some Nazi comparisons to present day America, Al-ameen Ishola maintained a focus on the importance of acceptance between races in his presentation on the future of race relations.

Throwing his U.S. passport on the ground at the beginning of his speech, Ishola stated that he was not born in America, but unlike many of the people who were born in the country, he is not afraid to discuss the topic of racial issues and hopes that after his speech, other people can do the same.

Bringing light to a hyper-local and global issue, Brianna Visaya discussed the effects of agricultural run-off and pollution in the Bay Area’s own Delta ecosystem. Due to poor water quality and other factors, invasive plant species are now abundant in the Delta — that same phenomenon present in many ecosystems around the world.

“Our actions, no matter how big or small, impact the environment in some way,” she emphasized.

Finishing off the evening with a comedic take on her disability, LMC Counselor Nina Ghiselli cracked jokes about her stutter, but also brought light to the struggles that she and other people with disabilities face. Growing up with her stutter and receiving backlash from both friends and teachers in school, Ghiselli felt like she had “a voice that wasn’t being heard.”

Ghiselli compared having a stutter to an iceberg, stating that what most people see is the top half of the iceberg, but the part submerged underwater contains all of the painful emotions that come with dealing with the disability. While she once had an “iceberg” filled with sad emotions on her disability, she had now overcome those feelings and encourages other people suffering with those emotions to do the same.

As the evening came to a close, all TEDx speakers rejoined on the stage for a final round of applause. In appreciation for their efforts, TEDx coordinators Arcidiacono and Huffman were given large bouquets of flowers from the LMC community. Following the night’s closure, speakers, coordinators and audience members all congregated outside of the Recital Hall in celebration of the evening.

One of the many gathered in the excited crowd, LMC President Bob Kratochvil congratulated speakers and talked amongst others in the LMC community. Upon giving praise to Ghiselli, she jokingly asked Kratochvil, “Am I fired?” due to her uncut and honest speech. With a hearty and genuine laugh, Kratochvil responded “no!”

To watch the stream of the TEDx event, visit http://www.losmedanos.edu/tedx/default.asp