Fire Academy suit up for training 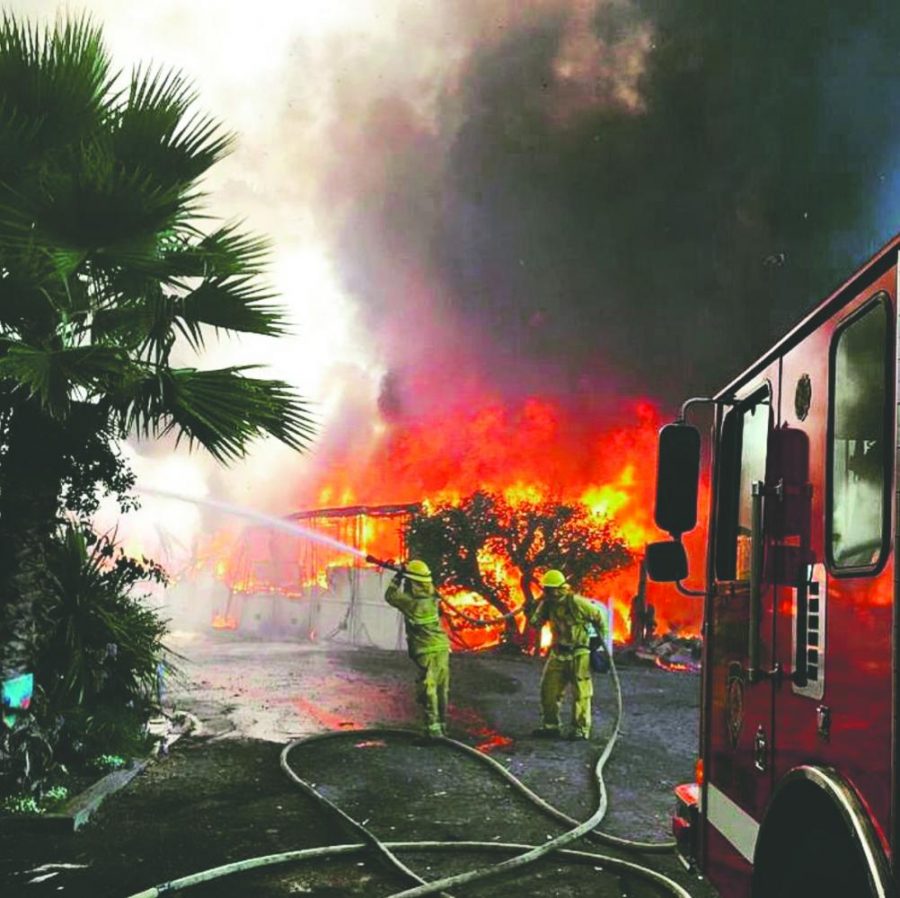 “I get there at 6:30 in the morning while everyone’s still sleeping,” said LMC Fire Academy graduate and probationary firefighter at River Delta Jordyn Tomasello, an all-volunteer Sacramento county fire station with a roster over 90 percent composed of LMC students and alumni, according to River Delta Captain Ken Jenkins.

“We’re doing duties, if there’s dishes in the sink we’re cleaning them, straightening things up,” Tomasello continued, describing a typical day at his probation-level position. “At 7:00 is when everybody wakes up, and we pour everybody above us coffee.”

After about an hour of ‘coffee talk’ between the firefighters about last night’s shift, shift change occurs at 8:00. The volunteers who stayed over night go home, and a fresh crew – including Tomasello – gets ready for the day ahead.

“We go outside to where our fire apparatus is, we check all of our equipment, we make sure everything’s running, pre-trip everything, run all the tools,” Tomasello described.

From there things proceed like any morning in any household – a quick clean-up, breakfast, another clean-up, maybe a run to the store to get supplies. Of course, the difference is that they could be called away to an emergency site any second.

“Usually every shift we get one or two calls,” said Nick Schiavone, 23, another LMC student, Fire Academy graduate and River Delta probationary volunteer. After the morning routine ends, if there’s no call, the volunteer brigade begins physical training in case there is one.

“Training could be from two hours all the way up to five hours,” Tomasello said. “If a call comes in between that, obviously that kind of messes with the training… we come back and finish training later.”

Around 5:00 pm, still assuming there’s no call, the brigade starts to work out, trying to eat dinner by 7:00 – naturally, the strenuous, serious and utterly unpredictable work of stopping fires and responding to emergencies means those plans could change at the drop of a hat.

After eating and cleaning up – whenever they do – the firefighters are given a chance to relax in-between calls, without any scheduled activities or chores. For probationary members like Tomasello and Schiavone, it’s a perfect time to study for the quarterly exams that track their progress through the probation program.

Shift change occurs again the next morning at 8:00 am, making one shift effectively over 24 straight hours of hard, unpaid work. The job is hardly glamorous – so what’s the appeal?

“When we get that tone,” answers Tomasello, “when it comes through the speakers, ‘beep beep beep beep’… everyone just gets excited. We start running to our engine, our adrenaline is pumping, we’re thinking about what the call is, where it’s going to be.”

“Just jumping on that engine, it’s always fun,” he continues. “Every time it’s something new. It’s never the same, there’s always something to learn from each call.”

“I want to work as much as possible,” explains Schiavone. “gain that experience and knowledge.”

While a volunteer job at River Delta doesn’t pay financially – hence why it’s volunteer work – it does offer the staff there a chance to grow as people, and a chance to prepare for a career spot at a paid fire station in the future.

“The opportunity that River Delta FD provides for LMC Fire Cadets leads to paid, professional jobs with fire agencies throughout the state,” remarked Mr. German Sierra, LMC Fire Technology Department Chair and one of the managers of the Fire Academy LMC hosts every year.

“They should change the logo… from a crawfish to a mustang,” Sierra joked about the station.

“That’s the great thing about River Delta. It’s a place to learn,” Tomasello says. “I love River Delta, I love being there, I love the people there… but obviously the goal is to get a career paid spot.”

Tomasello commented he’s wanted to be a firefighter since the age of 12, when he spent a couple of nights at a fire station with his uncle, who was a career firefighter.

“I’d go crazy behind a desk,” he said. “Being out there helping people… that’s more for me.”

Schiavone is also hoping for a spot at a paid station after he finishes his time at River Delta, and will always respect what they’ve done to help him towards that, hoping to ‘give back’ their ‘gift’ one day.

“They took me in as a kid with no experience whatsoever, and they built up to what I am today,” he said. “Even after getting a career spot, I’d like to say every once in a while I’d still come back and help.”

At the end of the day, River Delta, while a place to learn and experience community, is still more hard, dangerous work than anything else – a battalion of River Delta firefighters were sent to Atlas, California Oct. 11 to fight the Northern wildfires. and the program is very intensive and selective. Not anyone can join – applicants must first graduate a rigorous Fire Academy program at LMC and pass several rounds of intensive physical and written testing just to be considered – the roster is hand picked by Captain Jenkins.

“There’s a lot people trying to join in, it all dwindles down to who you are as a person and your character. If you show you are willing to learn, that’s who we want,” said Schiavone.

“We have a pretty good name, and we do a lot to keep that,” commented Tomasello. “You gotta know you wanna go there, we don’t take just anybody… it’s something you gotta be ready to put your social life on hold for, it takes a lot out of you.”

Still, it remains rewarding, not just for the volunteers but for Captain Jenkins as well, who decided to open a volunteer station instead of working at a career one to help young people who wanted to be in his field – especially students from LMC, where he got his credentials to teach.

“When it comes to the school, that’s where my heart is at,” Jenkins said.

“Captain Jenkins, that man puts everything on his back,” remarked Schiavone. “If it wasn’t for him and his dedication to his duty, River Delta would not be here.”