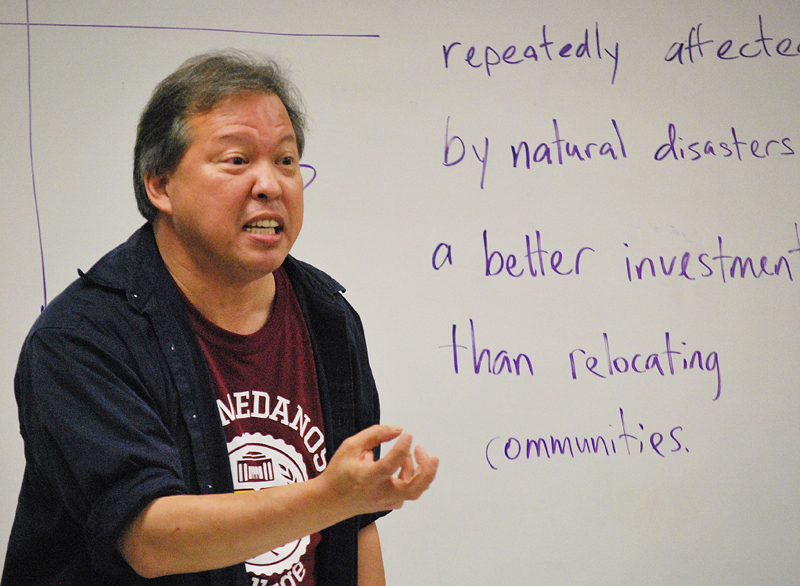 The LMC debate team has grown this semester with a burst of new members. Last week’s practice hosted a massive 26 participants, with 16 newcomers.

Debate Team Coach Kasey Gardner said the team was comprised of around 16 people,” which means the team has grown by 10.

Co-Coach Marie Arcidiacono explained that the increased size of the team is great for practice. “We can immediately start running rounds,” said Arcidiacono.

She further explained that the typical practice consists of a short lecture, then debates and feedback. Returning team member Richard Stanfield shared Arcidiacono’s excitement, indicating that he is “excited the class is so large!”

The influx of students has also been met with the appearance of a new coach. Professor of Political Science David Zimny retired, and Prof. Edward Haven has joined the debate team this year to fill in as a volunteer coach, bringing his philosophical expertise to the arena.

At its core, debate is about pitting great minds against one another in a collaborative and competitive learning environment.

There are multiple styles of debate, and what style the team competes in varies from college to college. The LMC debate team uses British Parliamentary format, commonly shortened to BP or worlds. BP focuses on large-scale issues, and aims to make the debates accessible to the audience by avoiding technical language and obscure facts.

Teams are presented the motion, a kind of prompt, and the side they will argue for only a short 15 minutes before the debate. Each team is comprised of two teams of two debaters. The individual pairs are not allowed to plan together, and must adapt their arguments as the debate progresses.

Stanfield notes that one of the key aspects of the practices is “training to look at things from more than one perspective.” He also added that, “World’s, more than other debates… focuses on arguing a good argument,” as opposed to a more jargon-filled speech.

Haven explained that, because BP asks broad questions, often times students are posed with “what should we do” scenarios. “It’s important to have flexibility,” Haven added. “You need to be able to pivot your moral argument as a response.”

The team’s first debate will be at Dominican University in San Rafael, Nov. 4 and 5. Students interested in the debate team are encouraged to enroll in Speech 160, or drop by practice, Wednesday in room CC1-115, 4-7 p.m.