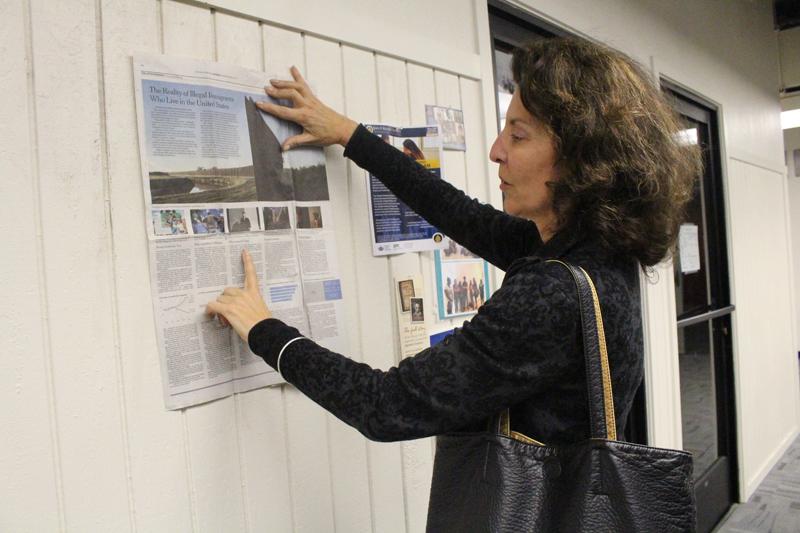 A case of vandalism occurred on the second level of the College Complex outside Instructor Laurie Huffman’s office last Thursday, March 16.

Lieutenant Chad Wehrmeister describes the situation as a small fire that burned up the articles posted outside of Huffman’s door.

“Apparently sometime before 2 p.m., somebody burned a series of postings on the wall,” said Wehrmeister.

Around that time, Police Services was having a meeting about safety in Room CC2-225 around the corner of where the crime took place moments before. Because of construction going on at that moment, they didn’t think anything of the smell until someone caught on to what was going on.

Huffman herself had not even noticed the wall was damaged when she first walked in to school Monday.

“I was in a meeting in my office and [Teresea Archaga] walked by … and she said ‘oh I came by to see your burned wall,’” said Huffman. “But then now when I look at it, it’s obvious it was burned and my articles are gone.”

She had put up the article about Senate leader Kevin de Leon published in the Sacramento Bee where it references issues surrounding the topic of immigration as well as other postings with a similar subject matter.

“I’ve been here 32 years … I’ve always posted articles from major newspaper publications — international, Latin America [and] United States — outside my door to my office all the time. What would be the chances of it accidentally burning up on my wall?” said Huffman.

As a result, there has been increased visibility in the social sciences wing of the College Complex, especially during the times when the incident occurred. Since it is a high-traffic area they encourage anyone with any information to come forward if they saw something.

“What I’m going to do is I’m going to go home, pull those articles, print them and put them back up,” Huffman.

Before she left the school, she made sure to put up another article on immigration written on the reality of illegal immigrants by the New York Times

“I will not allow someone to burn my articles,” said Huffman.

Police recommends that in the future people report situations to them immediately and to contact them at their main line at 439-1505.