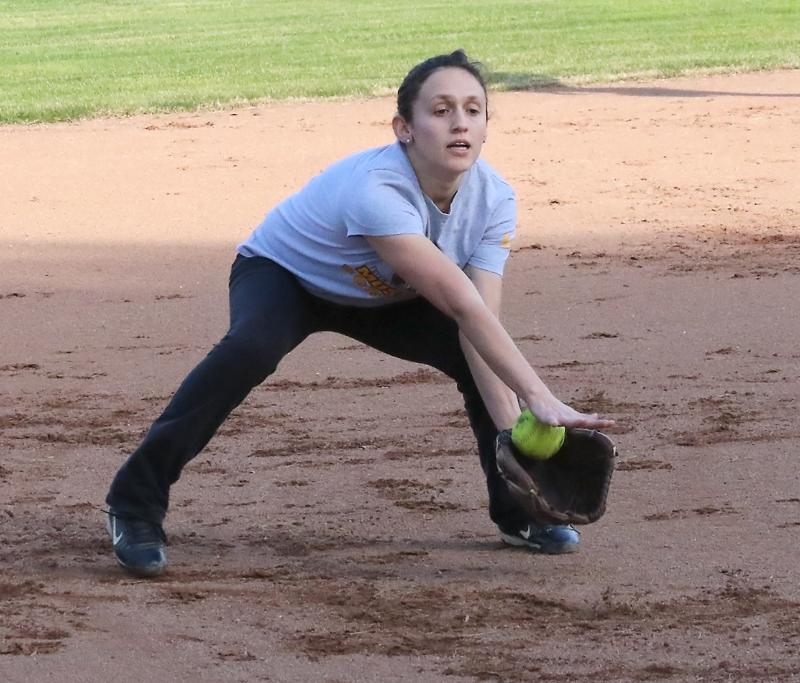 LMC's Marie Rios reaches down to catch a ground ball during practice Jan. 30 in preparation for the season.

When spring comes around at Los Medanos College, it signifies not only the beginning of a new semester, but also the dawn of a new softball season.

The Mustangs look to start off on the right foot as they kick off their season against Lassen College in a doubleheader, Friday, Feb. 17 at 12 p.m.

After two solid seasons, the team may be primed to make the playoffs this year, as last year’s 14 wins left them one win short of postseason play.

The team will have to adjust to a different schedule this year, as the season has been shortened from 24 games to 18. This alteration comes on the heels of both Napa Valley College and Solano College dropping out of softball play this season in the Bay Valley Conference.

Yet the conference is not the only one facing adversity, as the Mustangs have not exactly had the smoothest transition from last year up to this point.

“I had 19 players on the roster during September, and in January I was down to 5,” said head coach Tim Rognlien. Due to the limited roster at the time, the team was forced to cancel pre-season games.

“Some [players] can’t play full-time, so we’re putting the puzzle together as we go,” Rognlien added. “We’re fortunate to have a really good coaching staff, technique-wise and in teaching fundamentals.”

One of the strengths for the team last year was their pitching, as they finished with 132 strikeouts, compared to the conference average of 80. While they outpaced their rival teams, they will have their work cut out for them, as their number one pitcher from last year has moved on from the team.

While they did set a strong pace for strikeouts, they also look to improve on the amount of walks they allowed in a season. Last year they allowed 127 walks compared to the conference average of 104.

It will bode well for the team that the coaching staff remains unchanged, as both John Gamblin and Gabe Soliz are returning as assistant coaches, but only three players are returning from last year’s squad.

The influx of new faces to the team and limited time to prepare as a unit could be seen as a bump in the road, but returning team member Ryann Yelder sees good progress.

“It’s been a little weird for me because there are only two other returning players, so there is basically a whole new team for me, but I like everyone this year.”

A big focus for any team would be creating good chemistry with one another, and Yelder believes it is coming along well for the Mustangs.

“Even though we haven’t practiced together that much, I think everyone really gets along well, and I think that will help us on the field.”

Of course something else that’ll help the team get through games is putting points on the scoreboard, which Rognlien does not foresee being an issue.

“I think we’ll be good hitters, some of the ladies are long ball hitters.”

Offensively the team appears to be set, but he believes there is still work to be done on the other side of the ball.

“Defensively, we’re not sure yet. Pitching is always going to be a concern, we lost our number one pitcher from last year, and our returning one has to shake off some rust.”

While the challenge of preparation for the start of the season is evident, Rognlien has a firm belief in his club.

“First we have to get an immediate feel for the team, to see what we got. [But] I don’t see any reason why we can’t compete with any team. We’re going to surprise some people.”

Yelder echoed similar sentiments with her own expectations on the season.

“I expect that if we come together as a team and play like I know we are all capable of, we should win our conference this year. I think we have a really good chance at that.”

For more information on the LMC softball team, visit http://www.losmedanos.edu/softball.