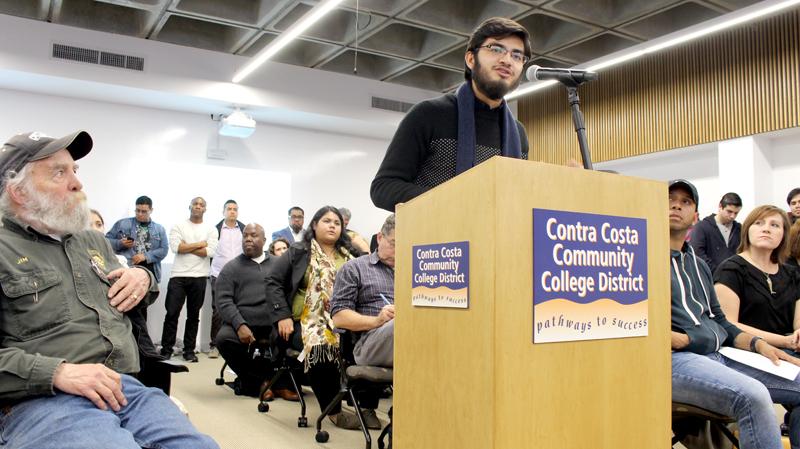 In response to the Trump Administration’s targeting of undocumented immigrants, Muslims and the LGBTQ+ community talks of creating a “sanctuary” at all three colleges first began with a petition sent online, gaining over 700 signatures.

At the Dec. 14 governing board meeting, a packed room of students, staff, faculty and community members filled the room in support.

“The call to be a sanctuary is more than just words, it is a call for a stance. What we are asking the governing board to do is to take an active stance, a pledge that you will do everything in your power to defend our most vulnerable students and to advocate for them in every way that you legally and politically possibly can,” said DVC Sociology Professor Andrew Barlow.

Students such as LMCAS President Israel Castro Cortez also took the time to express their support as well.

“I truly believe that the Contra Costa Community College District is a leader in providing students with the necessary resources to be successful in their academic career,” said Castro Cortez. “Our intentions to create an atmosphere of community does not end with offering academic tutoring, it extends to ensuring that our students feel valued and safe.”

Tears filled the eyes of speakers and attendees alike as people shared their stories.

“I work with little kids and it came to the moment where after the election kids would come up to me telling me they were scared,” said Marisol Contreras a Middle College student at Contra Costa College who works at METAS, a group offering mentoring, tutoring and counseling to Latinx students. “There are children, there are families there are so many people that need this [sanctuary].”

As a member of the community, Mariela Cuellar chose to speak at the event as a parent of METAS students.

“We need to be strong, we need to be united,” said Cuellar.“ Although I am a citizen now, I am an immigrant. I will be an immigrant and I will support any human being discriminated against.”

Following the speakers the board gave their final thoughts.

“I felt what they were feeling,” said Trustee John Márquez expressing his gratitude to all the people who spoke up at the meeting.

In the weeks following the meeting an ad hoc committee was formed to create and present the resolution at the next meeting.

Although the Jan. 11 meeting had a smaller turnout, there were a handful of people who chose to stand and speak.

“We are here in support in this resolution … our goal in bringing forth the resolution is to is to reaffirm the spirit of sanctuary within our district,” said CCC HSI STEM Manager Mayra Padilla. “While we recognize the limitations of the legal protections that can be offered by the district, the spirit of sanctuary is to make students and employees who are threatened as included and safe as possible at a time of real danger.”

Not a single voice in opposition was heard at this gathering.

After hearing all of the speakers and going through the legalities with lawyer Gabriel Sandoval, the governing board unanimously decided to pass the resolution 6-0.

“The freedom we all stand here to protect is freedom of fear … what we saw last month was fear,” said Farley. “I want this community to know, as long as I am on this community college board and I have anything to do, I will do everything in my power to protect our students from fear.”