Leaving with a legacy

Price to retire after 43 years 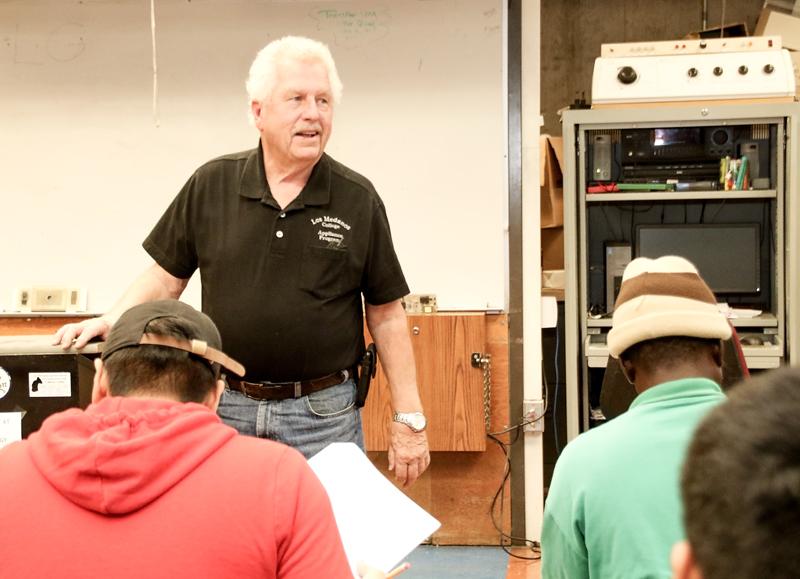 Facing the “hardest decision” he has made in his 43 years of teaching at Los Medanos College, Appliance Service Technology instructor Leonard “Len” Price has decided to retire at the end of the 2015-16 school year. While plans to travel the United States are already set for the founding faculty member, he stated his absence from LMC is only temporary.

Hired by the college’s first president, Jack Carhart in March 1973, Price was one of only three faculty members to begin instructing at the new college in its first semester in the spring of 1974. Along with automotive instructor Mike Miller and welding instructor Bob Sysum, the trio began laying the foundation for the newest Bay Area community college.

“There were no telephones or supervisors on campus, just bare walls and few students,” said Price as he described the difficulty of there being no additional support for the new faculty. “We had to build our courses from the ground up, which was a great challenge, and I kept saying to myself ‘do you really want to do this.’”

After more than four decades in employment with the college, one thing is certain — he did.

During his many years on campus, Price went beyond his title as an instructor teaching appliance repair to a variety of other titles, including, Academic Senate President, as well the first faculty president of the California Community Colleges Association of Occupational Education.

While additional titles on and off campus did give him recognition not only in the college community but the surrounding areas, including being named “Outstanding Vocational Educator” by the California Community College Administrators of Occupational Education in May 1989, his long running profession as instructor in the appliance repair program has contributed to his many successful contributions to the college.

“Len has been an exceptional faculty member, and has been the source of success for hundreds of students who have gone through his program,” said LMC President Bob Kratochvil.

It’s those many students who have helped drive the instructor through the many years at LMC.

“One of the fun things that happens is when you hear from a former student and find out about a job you didn’t know they had,” said Price. “Students never forget being a student here and always are calling you when they learn about something new you might want to use in the appliance program.”

Successes of former students is only one of the “rewards” Price considers to outweigh the value pay-checks collected during his employment, the very understanding that a student gets during his lectures is also something Price has prized as a teacher.

“I will have to say if it were not for my age I would continue to do what I love doing — and that is teaching,” said Price. “The rewards you get are not in a pay check but the ones you get when a student says I finally understand, the light just came on, or you get a call and they say I got the job. When you see you’ve helped someone change their life and get ahead, that is the real reward.”

It’s the hard work of this longtime instructor that has helped change many lives throughout the years, constantly adapting to the ever-changing technologies involved with the lessons in his course as well.

“Technology in the appliance field is always changing and every manufacture has a different way of building the appliances, which makes this field so interesting,” explained Price. “This means to stay up to date you are always changing your lesson plans daily to prepare your students to be current in the work place.“

It’s this understanding of this constant changing that has not only assisted the instructor in aiding his students with their lessons, but also help to gain partnerships between LMC and many well known companies in the industry.

“My goal when I started teaching here was to be the best appliance teacher I could and have the top appliance program in the state. Well, I think we have achieved that,” said Price. “The LMC Appliance Program is nationally known to be a leader in training appliance students. We were the first Maytag training center on the West Coast. Since then we brought in industry to train here from Sears, Whirlpool, BOSCH, GE, Frigidaire/Electrolux and, recently, LG.”

While Price may have personally had his hands in many gains the college has seen to its appliance program, it is the school itself in which the decades long instructor holds much respect for. With his own family having passed through the halls of LMC, it’s with great pride that he describes the college as having “the best community college education available anywhere.”

“All of my children have gone to school here,” said Price, stating many of his family members having graduated from LMC, including his grandchildren. “My youngest grandson will be graduating from LMC in May with four AS degrees and has been accepted to UC Santa Barbara’s engineering program. What can I say — LMC educational programs are tops.”

As Price prepares to complete his final semester at Los Medanos College, he looks back at all he has done for the many individuals who have participates in his courses and offers all current and future students final words of advice in pursuing their careers.

“Regardless of what career you choose, do it because you love doing it not just for the money,” explained Price. “I see so many people on their way to work that don’t look happy, or someone saying I only have to work eight more years to retire. I will have to say that is something I never thought about before deciding to retire.”

As the college prepares to say “goodbye” to one of its founding faculty members, those who have come to know “Len” throughout the years offer their thoughts to the man who has been a legacy at LMC.

“Congratulations and very best wishes to Len on behalf of the faculty, staff and students at LMC,“ said President Kratochvil. “He is one of a kind.”